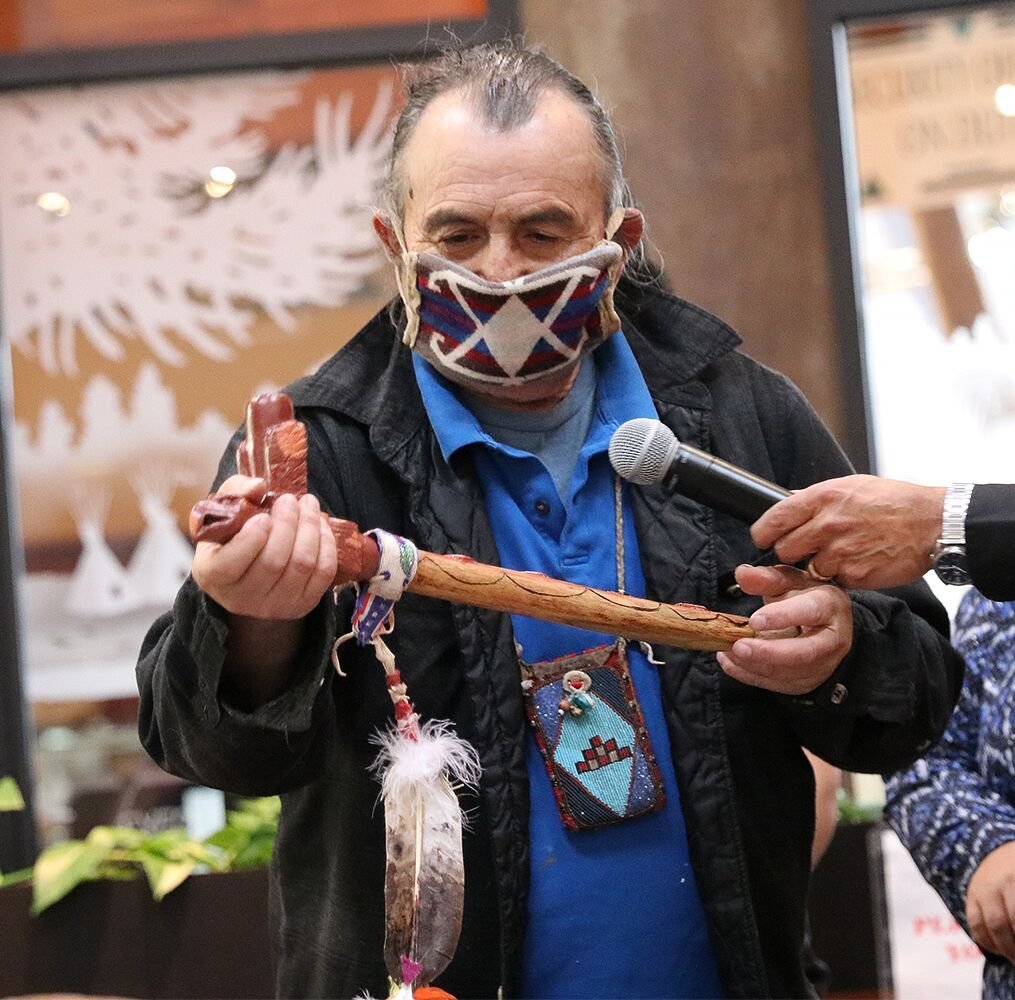 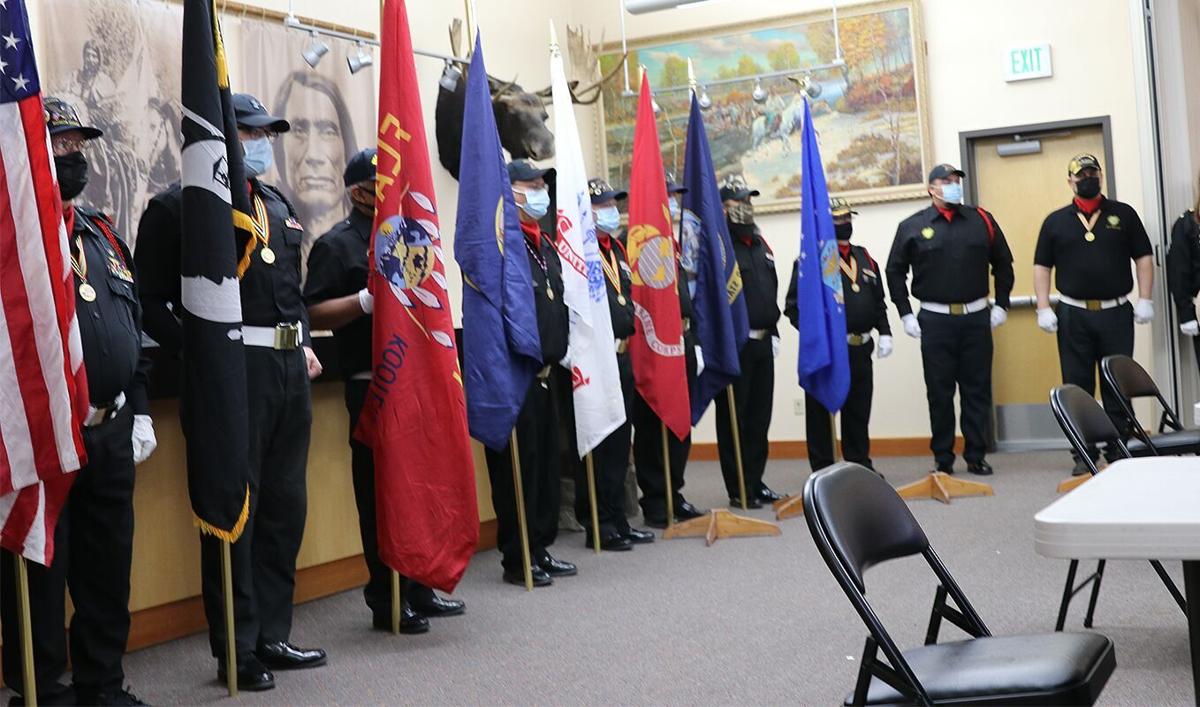 The Mission Valley Honor Guard hoists the colors during the flag song by the Yamncut Drum.

The Yamncut Drum sings an honor song at the USS Montana ceremonies at the Tribal Council chambers. 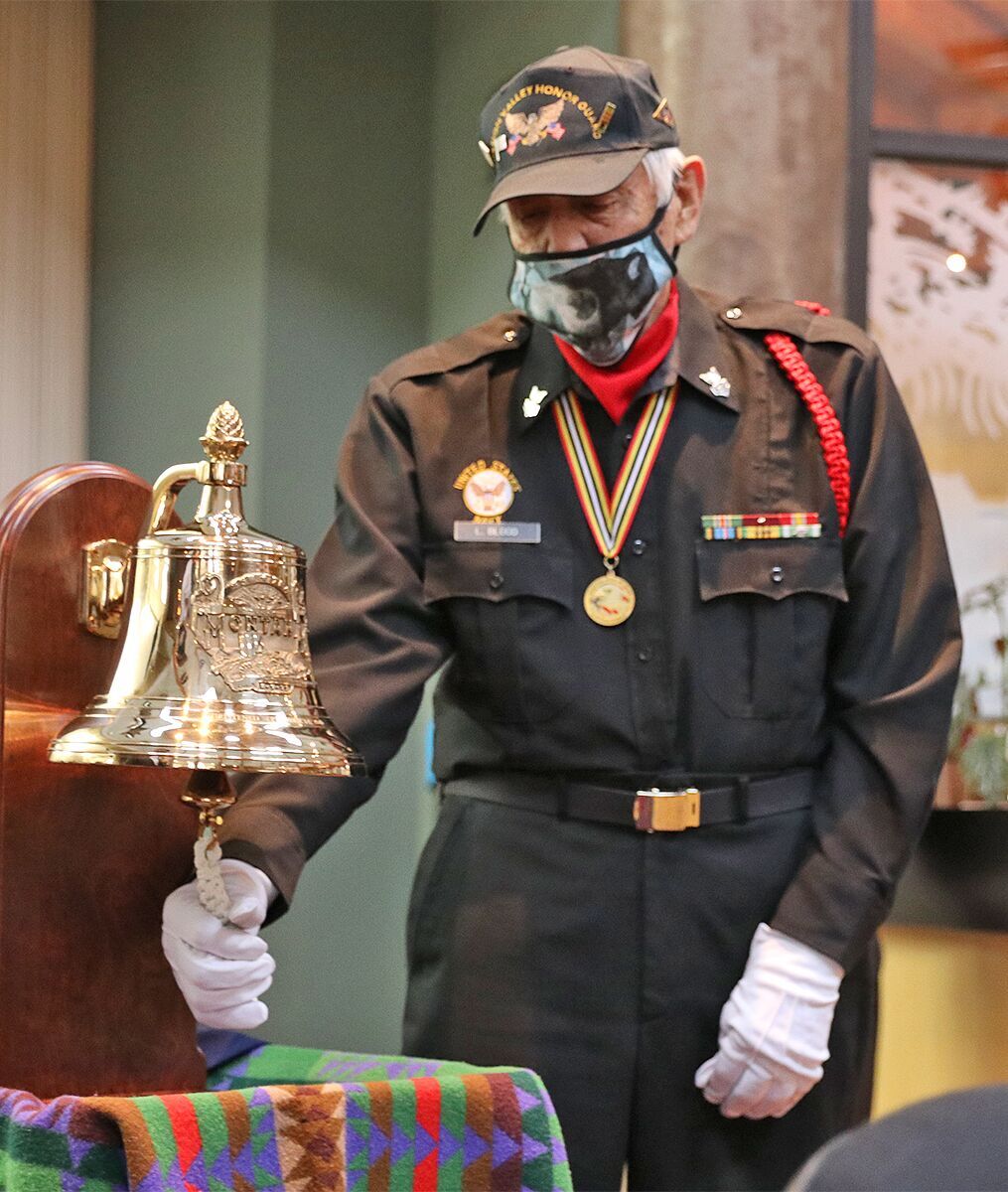 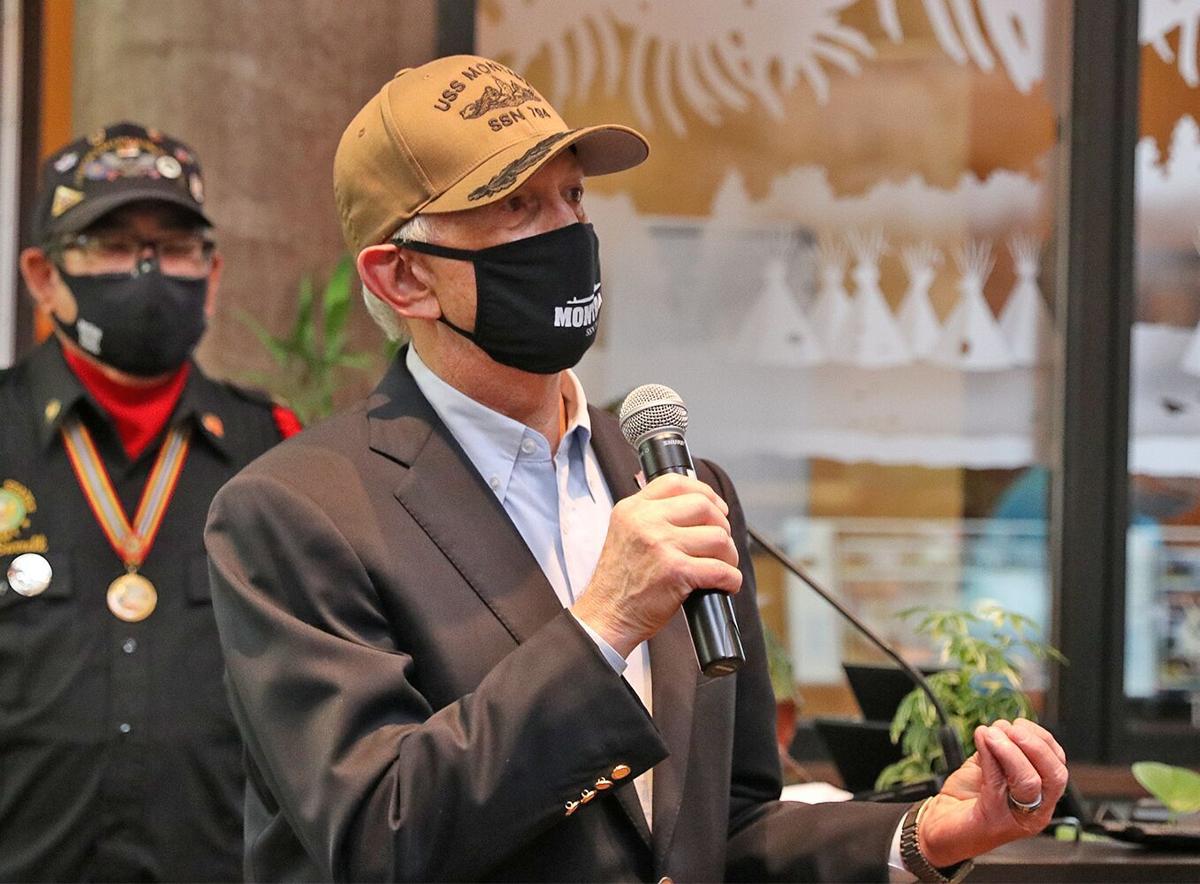 USS Montana Committee Chairman Bill Whitsitt updates the Tribal Council on the progress of the nuclear submarine named after the state.

USS Montana is a Virginia Class nuclear submarine similar to this one.

The event opened with a flag song by the Yamncut Drum, and the posting of the colors by the Mission Valley Honor Guard.

Pikuni artist Dwight Billedeaux was commissioned to create a peace pipe that will be permanently displayed on the USS Montana until it’s decommissioned.

“It is an honor to do this,” Billedeaux said, then explained the meaning of the symbols he placed on it. “I am very proud and honored.”

The USS Montana, a 7,800-ton nuclear submarine, is expected to go into full-service May 2022 when it will be commissioned into the U.S. Navy, said Bill Whitsitt, chairman of the USS Montana Committee.

“We want to make sure that the people that serve on the USS Montana know about the Indian people of this nation,” Whitsitt said, adding that the Flathead Nation’s input and blessings have been heeded. Whitsitt and four sailers that will be crewmembers of the USS Montana visited the 2018 Arlee Celebration, and were recognized by then-Tribal Councilman Dennis Clairmont on behalf of the Flathead Nation.

In February 2019, the Tribal Councill passed a resolution that proclaimed its support for “the USS Montana Commissioning Committee in its endeavors to support the commissioning and all those who sail aboard her in defense of our nation.”

Whitsitt displayed submarine-sized replica of the full-sized bell aboard the first and only other USS MONTANA, a cruiser that was commissioned in 1908 and decommissioned in 1921. The bell honors the Montana State Motto, Oro y Plata (Gold and Silver). Melted into it is real Montana gold and silver as well as gold and silver dolphin pins worn by submariners. It also contains an eagle feathers design in recognition of the tribal people in Montana and nationwide. The eagle feathers are replicas of those on the Flathead Nation Veterans Memorial at the headquarters complex. Another design elements are a grizzly bear and a mountainous rendition of the Glacier National Park skyline. When it is in service it will fly the Montana flag, along with the United States flag.

In an interview following the ceremony, Whitsitt said the $2.7 billion USS Montana, that was christened in September 2020, was moved from dry dock at Newport News Shipbuilding in Virginia in early October into the James River. It will undergo sea trials later this month or in December to demonstrate its sea worthiness. Along with its USS Montana moniker is its Navy fleet hull number SSN-794.

“The crew is currently and has been undergoing intensive training. They have been living and working on the USS Montana for the last year” Whitsitt said. “The next step is certification then it will be commissioned into the Navy.”

Whitsitt said a lot of events are planned for the official commissioning of the USS Montana and would like to have Montana tribal representatives at the festivities.

“We would like them there live and in-person to sing a flag and honor song ahead of the formal ceremonies,” Whitsitt said. “I want to thank the Tribes; their participation is much appreciated. I see this as a real continuation of support and encouragement from the [Flathead Nation] and the other Tribes honoring [this effort].”

Christened on September 12, 2020, the future USS MONTANA (SSN 794) will be among the most advanced submarines in the world when she is commissioned in the spring of 2022 and becomes a part of the U.S. Navy fleet.

A Virginia Class nuclear-powered fast attack submarine, the USS MONTANA will have the most advanced stealth capability. This will enable critical Intelligence, surveillance and reconnaissance operations. She’ll be lethal, able to protect carrier and expeditionary strike groups, as well as hunt and destroy enemy attack and missile submarines and surface ships.

The USS MONTANA will have the ability to precisely navigate in shallower waters to come close to adversaries. She’ll be multi-mission-capable, able to deploy and detect mines, launch Tomahawk cruise missiles against land targets, and insert entire platoon-size Navy SEAL special operations teams into dangerous areas, all while submerged.

Construction completion and testing pier-side will lead to sea trials in 2021-2022, with acceptance by the Navy and commissioning likely later in the spring of 2022.

Members of the crew are standing 24-7 Engineering Department watches because of the fueled nuclear power plant. And each of the more than 130 sailors assigned to MONTANA is undergoing intense training in areas ranging from “piloting” the leading-edge warship, to weapons systems, to operating and maintaining the many other systems that are critical to sustaining the fighting ability and crew of MONTANA “on scene, unseen” for long periods.

Following commissioning, the USS MONTANA is expected to serve our nation with a range of missions around the world for more than three decades.

For her entire service life, the USS MONTANA will have the support and prayers of all Montanans.

The first and only commissioned USS Montana was an armored cruiser (AC 13) commissioned into the U.S. Navy fleet in 1908. She served with distinction through and beyond the First World War and was decommissioned in 1921.

Two battleships (BB 51 and BB 67) that were to have been named Montana were cancelled in 1922 and 1943 respectively. Construction had begun on BB 51 and she was 27 percent completed when work on her was halted. BB 67 was to have been the lead ship in a new class of battleships, cancellation of which came before the construction began on Montana. This resulted in Montana’s being the only state that did not have a battleship named for it.