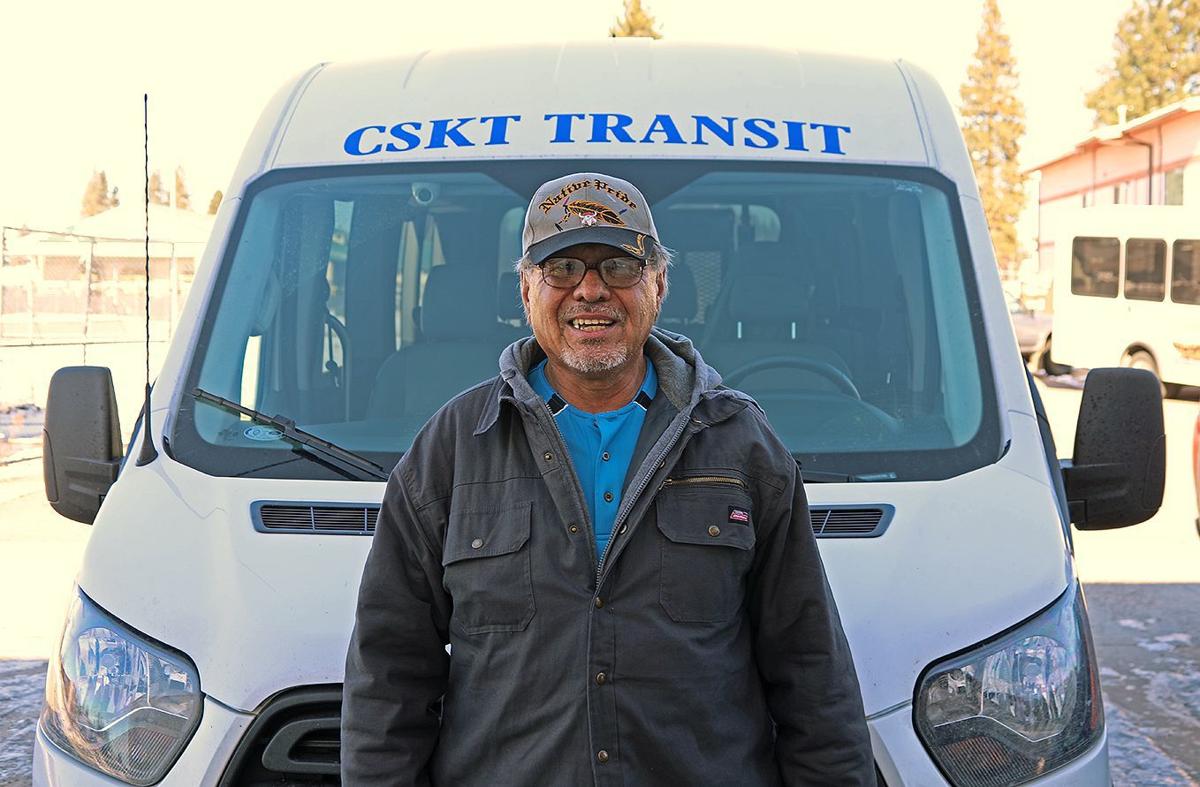 John Montoya, 62, says the CSKT/Transit service helped him become a successful student at Salish Kootenai College. He stands by one of the vans that gives him a ride from Arlee to Pablo daily for classes. 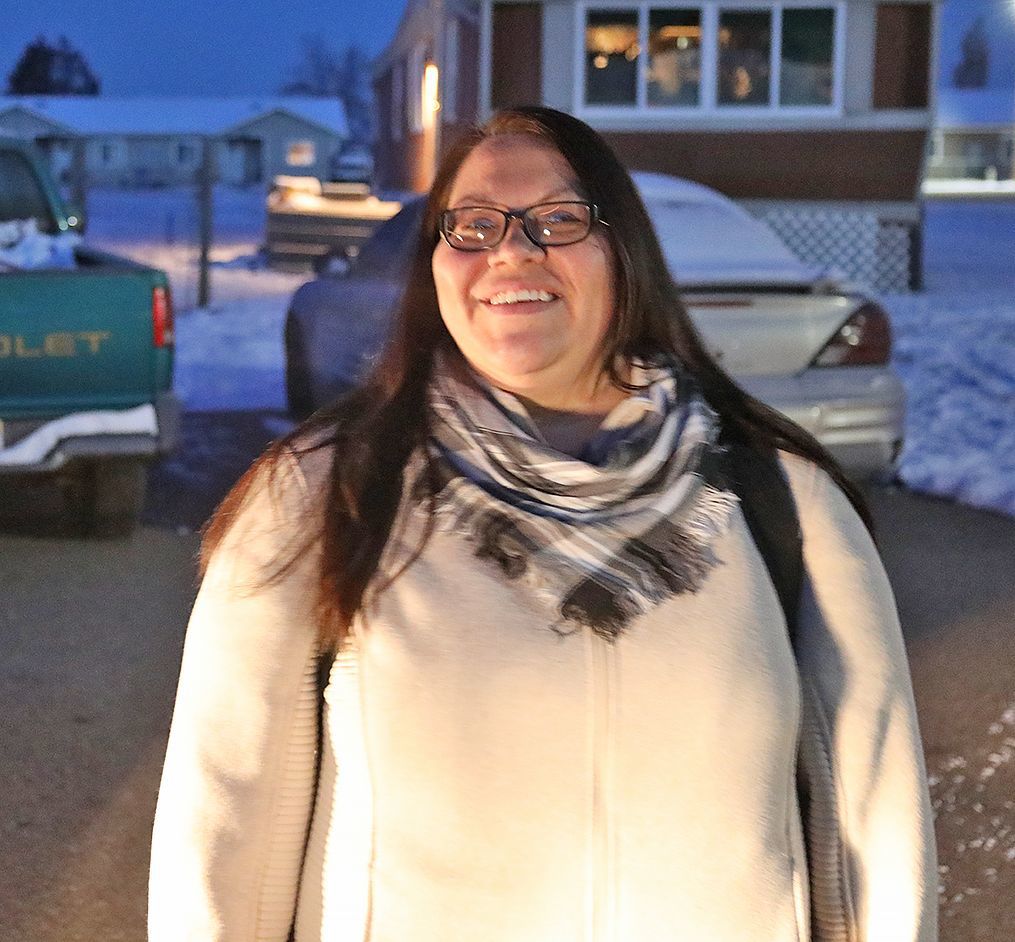 Maranda Spotted Eagle takes the shuttle to SKC each morning during the winter, a practice she suggests to students who struggle navigating winter roads. She prefers getting in the warmed van that passes by her Pablo home instead of struggling with iced-up windows and slick roads. 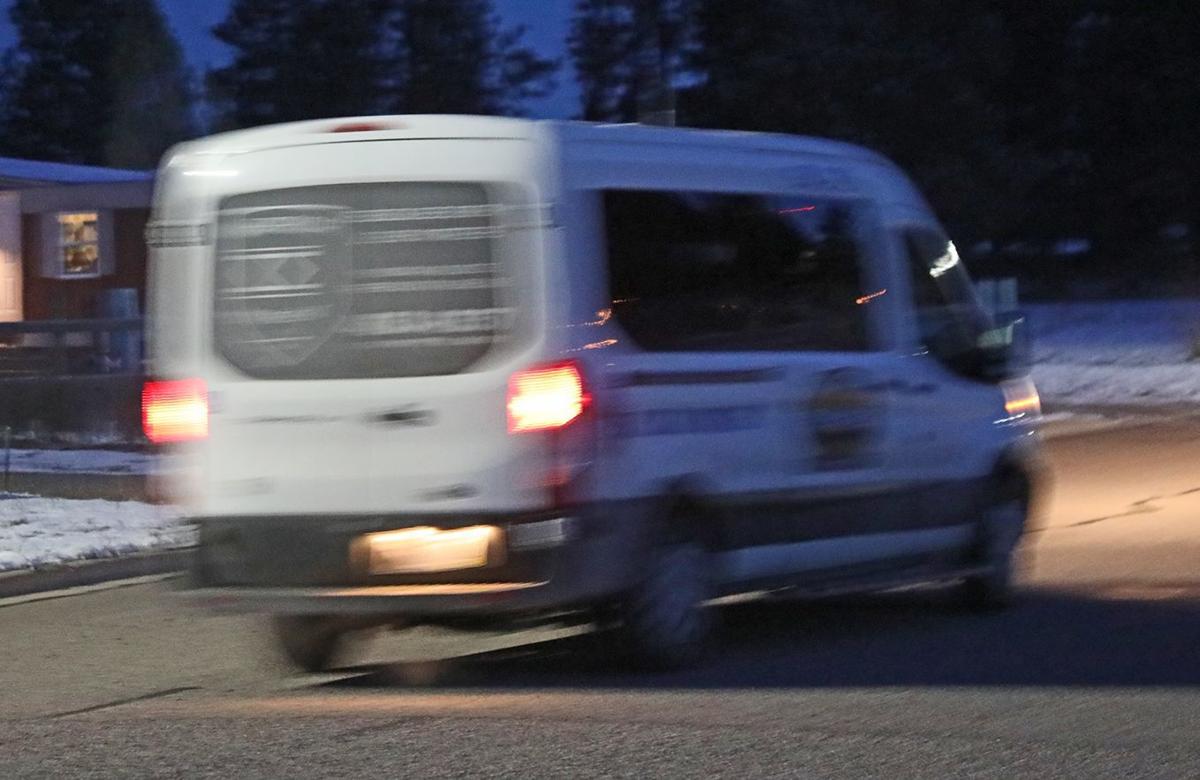 CSKT/DHRD Transit bus speeds off to the next pickup.

John Montoya, 62, says the CSKT/Transit service helped him become a successful student at Salish Kootenai College. He stands by one of the vans that gives him a ride from Arlee to Pablo daily for classes.

Maranda Spotted Eagle takes the shuttle to SKC each morning during the winter, a practice she suggests to students who struggle navigating winter roads. She prefers getting in the warmed van that passes by her Pablo home instead of struggling with iced-up windows and slick roads.

CSKT/DHRD Transit bus speeds off to the next pickup.

PABLO — John Montoya received honors for perfect attendance and was even named on the Salish Kootenai College honor roll. Now he’s working toward a Bachelors in Psychology, and eventually a masters in social work. The 62-year-old former construction worker from Wyoming says credit for his success rightly belongs to those who drive him – the reservation transit system.

The Department of Human Resources Development operates a transportation system that takes riders from Missoula to Kalispell and everywhere in between. Students like Montoya ride for free.

“I’ve lived on eight reservations,” Montoya said. “Everyone had a transit system. Not one even comes close to this. The Tribes and community should be very proud of this system. Very proud.”

In 2001, when DHRD first began transporting clients from various appointments with DHRD programs, the amount of drivers and vehicles were limited and started out with two drivers and two white vans with “CSKT/DHRD Transit” printed on the sides and front. As the years went by and the demand for public transportation in rural communities increased, the DHRD Transportation program added to their staff, as well as their vehicles.

Montoya admits when he first saw a transit flyer pegged on a message board at an Arlee grocery store he was a little skeptical. On his home reservation, the Arapaho Tribe of the Wind River Reservation, Montoya said staff infighting interfered with the job of delivering people to their destinations.

“Here everyone knows me. They know me by first name,” Montoya said in a recent interview between classes at the DHRD transportation offices. “They’re professional. They do everything they can to keep us out of harm’s way.”

They dodge the deer, bad drivers, snow, and harsh weather and keep the people moving, he said.

“If it wasn’t for them getting me to college I couldn’t have done it,” Montoya said. He added that it’s important to point it out when people get something right.

In 2007, the Montana Department of Transportation gave the CSKT transit Program two mini-vans and two buses that met ADA accessibility requirements. In 2010, the DHRD Transportation Program received the MTA Transit System of the Year award. Today’s staff now consists of 14 drivers, two dispatchers, one administrative assistant, one mechanic and one program manager.

Maranda Spotted Eagle takes the shuttle each morning. This time of year, it’s dark outside during her pickup and soon after a yellow school passes through her North Pablo neighborhood, she sees the lights from the DHRD shuttle. She smiles as she walks from her home to the shuttle door.

“Hi Doug,” she said while trying to explain why someone was flashing a camera at her.

Spotted Eagle works at SKC, which has two bus shelter stops for the shuttle.

She’s utilized the shuttle when she worked at St. Joseph Medical Center and now she uses it to get to SKC. Everyone loves their car so when it comes up why she rides the bus, there’s curiosity.

“I get a lot of questions,” Spotted Eagle said. “People ask how much is it? Why do you ride transit? You live in Pablo? I like the company. I don’t have to go out and warm up my car. I can just jump in a warm van that’s in front of my home.”

Admittedly, she’ll ride her bike in the warmer months, but during the winter, she’ll leave the winter biking to SKC’s Math Department Head Matt Seeley who was seen riding his bicycle home recently in the frozen temperatures, a sight people will see all winter. His college web page states he’s commuted 50,000 miles through the years.

“I was not aware of the van option, but it might be tempting when single digits force me to layer beyond recognition,” said Seeley by email. “The recent October arctic blast came early enough to catch me woefully unbearded and the van might have helped me avoid refilling the gas tank on my truck.”

Spotted Eagle has noticed how the shuttles become crowded once SKC classes are back in session.

As a worker in the financial aid office she encourages students to consider the transit when they struggle to get to classes. Too often she hears how they want to keep driving. The warm van driven by someone who knows your first name gets tempting when the commute gets slow and slushy. She has a relative clinging to her car, but she’s from the coast where there’s little snow.

“I’m thinking,” Spotted Eagle said, “when she sees winter she’s going to jump in the van.”

Thanks for an interesting (and entertaining) article. One question, in case I want to tell a friend about this service: How/where do people sign up ? Or does the van stop on certain routes every day?