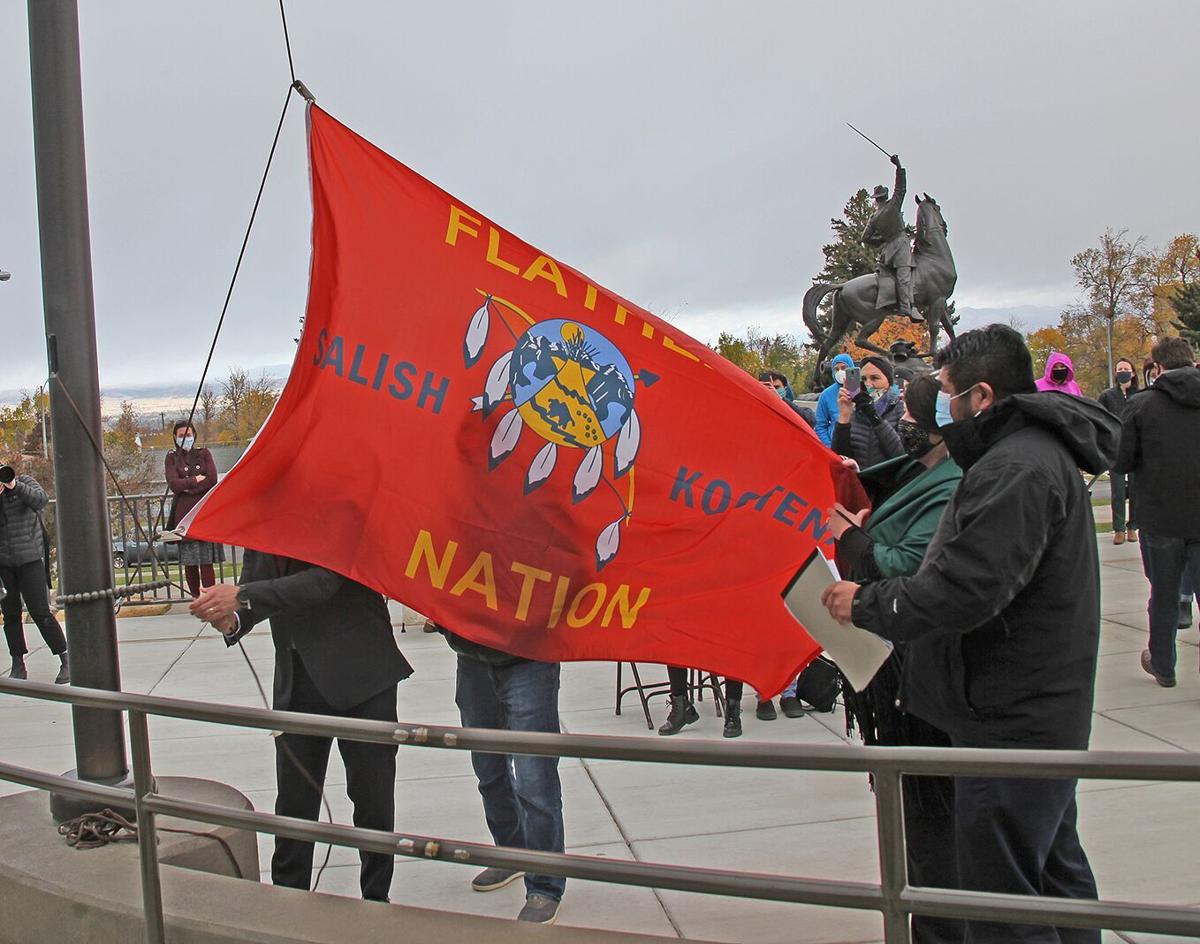 The Flathead Nation Flag is raised at the Tribal Flag Plaza at the Montana Capitol. 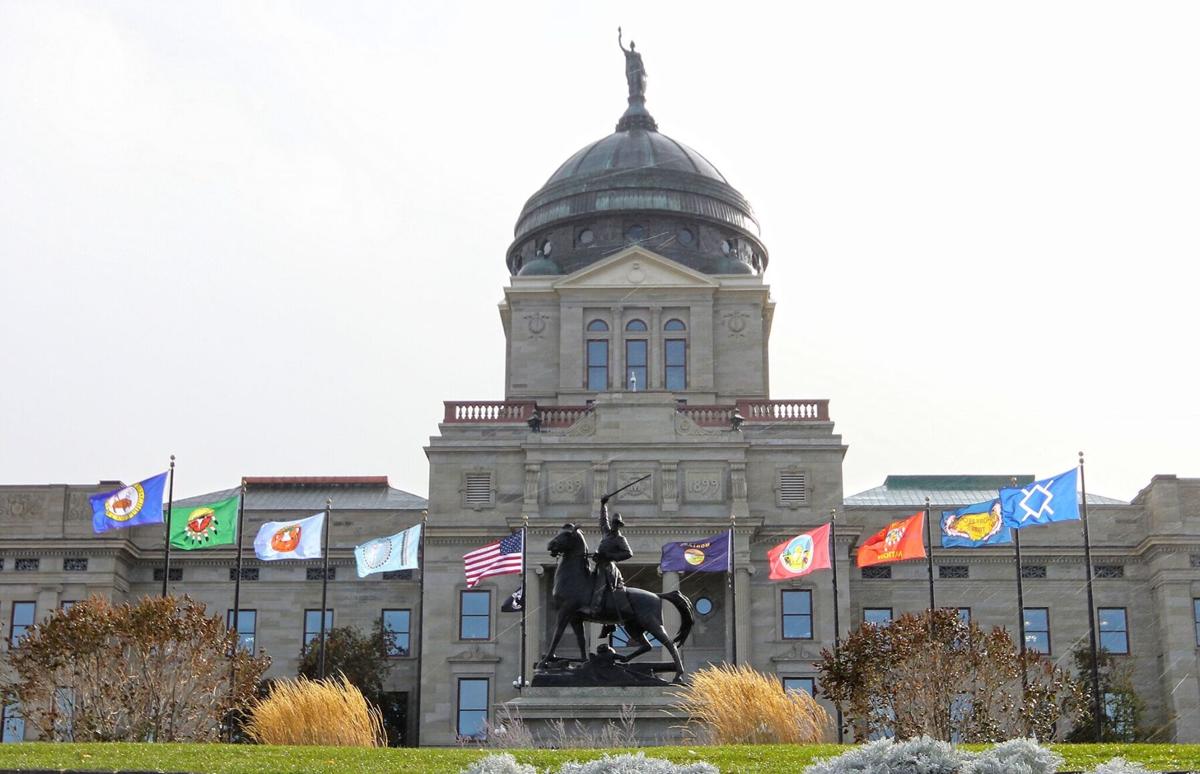 The flags of the eight Tribal Nations in Montana now fly at the Montana Capitol at equal heights of the America and Montana flags in the Tribal Flag Plaza. From left, are the: Little Shell, Fort Belknap, Crow, Blackfeet, US/MIA, Montana, Rocky Boys, Flathead, Fort Peck, and Northern Cheyenne flags. 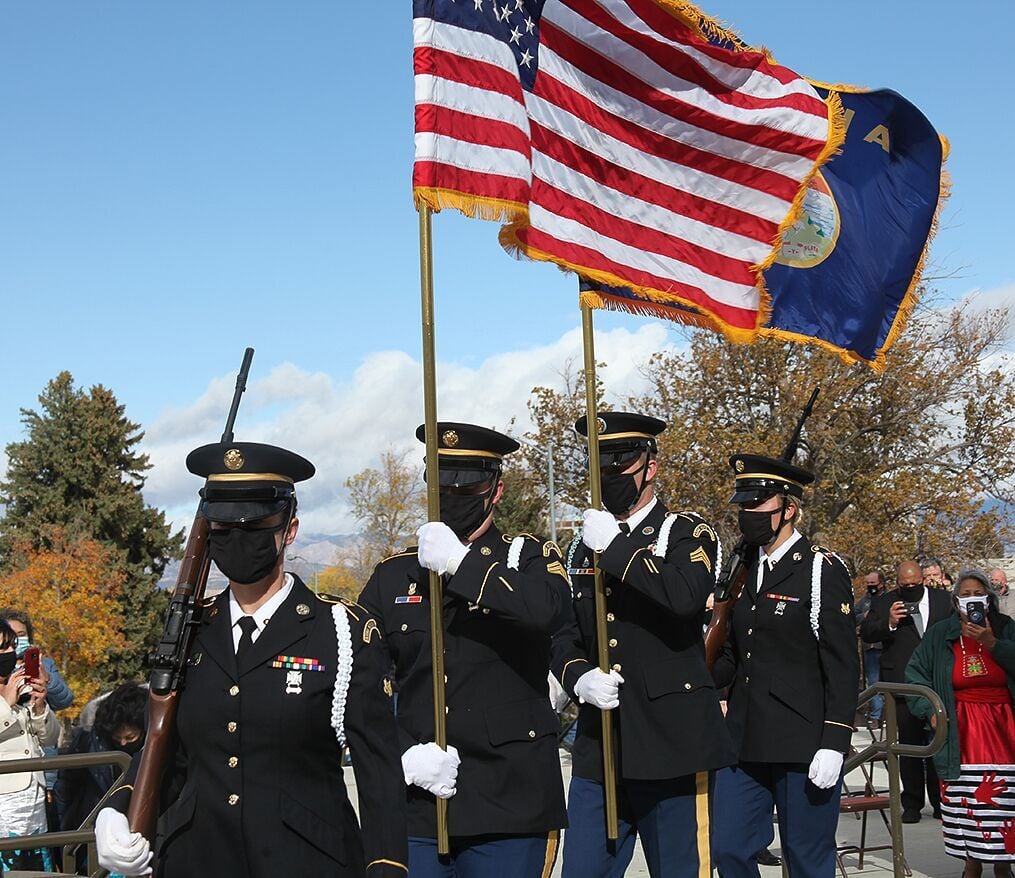 The Montana National Guard posts the colors at the dedication of the Tribal Flag Plaza. 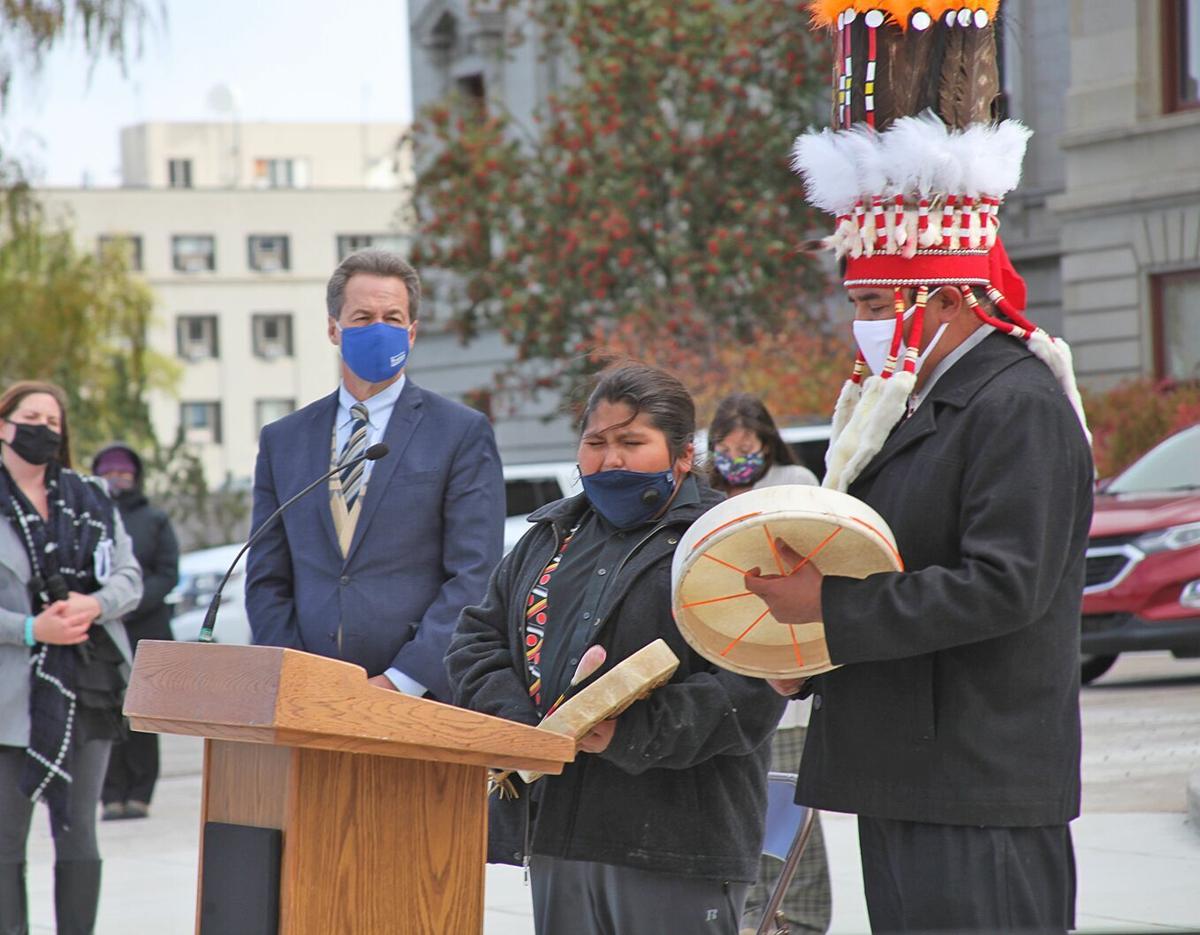 Patrick Armstrong of the Blackfeet Nation, and his son sing an Honor Song at the Tribal Flag Plaza dedication ceremonies.

The flags of the eight Tribal Nations in Montana now fly at the Montana Capitol at equal heights of the America and Montana flags in the Tribal Flag Plaza. From left, are the: Little Shell, Fort Belknap, Crow, Blackfeet, US/MIA, Montana, Rocky Boys, Flathead, Fort Peck, and Northern Cheyenne flags.

HELENA — It was a cold, wind-blustered day that chilled to the bone at the Montana Capitol Building last Wednesday (Oct. 14). It felt like Old Man Winter was sending a sample plate for what he has in store for we Montanans that don’t have the means or will to follow the sun to the warmer climes.

However, there was an anticipatory vibe in the air that tempered the knee knocking chill a bit and warmed the hearts of the 50 or so hardy souls gathered at the Montana State Capitol. They were there to witness and celebrate the dedication of the Tribal Flag Plaza located at the base of the of the steps of the main entrance at the Capitol building.

Among the hardy souls were representatives from the eight Tribal Nations — The Crow Nation, the Blackfeet Nation, the Flathead Nation comprised of the Séliš, Ksanka and QÍispé Tribes, the Northern Cheyenne Nation, the Rocky Boys Chippewa Cree Nation, the Fort Belknap Assiniboine and Gros Ventre Nation, The Little Shell Chippewa Nation, and Fort Peck Assiniboine and Sioux Nation — in Montana with the historic mission of hoisting their national flags.

Also, on hand were Governor Steve Bullock and Lt. Governor Mike Cooney, who welcomed the attendees, and Attorney General Tim Fox who participated in the raising of the Crow Nation flag.

In his welcoming and dedication statement, Governor Steve Bullock told the attendees that the Tribal Flag Plaza was the culmination of a long hard-fought victory and that the flags will be symbolize the resilience of the tribal people of Montana. He also gave a tip of the hat to Little Shell Nation, that has long been recognized by the State of Montana but was finally federally recognized last December after a more than 100 years battle for recognition.

“This is a story of optimism and achievement. No Native American in Montana should feel like they have to walk through the back door of the Capitol of Montana,” Gov. Bullock said. “This is a state house for all people — always for the First Nations. These flags will fly permanently… fly high every day so all can see Montana’s commitment when these flags fly together.”

The Flathead Nation Tribal Council representatives were not able to attend due to COVID-19 non-work-related travel restrictions.

“We are greatly saddened that we couldn’t be there to participate in the flag raising,” said Flathead Nation Tribal Council Chairwoman Shelly Fyant. “I am grateful for Jason, Shane, Danna and Casey for being there for us, and raising our flag.”

“It’s been a long time coming for the Tribal Nations in Montana to have a visible presence in Helena. Kudos to Marvin (Weatherwax, Jr.) for making this happen. It’s a class act to have all the tribal flags there. I also want to thank Governor Bullock and his administration; it’s been a great pleasure working with him,” Fyant said. “I have always liked that our flag is posted in the Governor’s Conference Room with the other tribal flags. Now it’s really nice to see the Flathead flag flying in front of the Capitol. It is a great welcoming gesture.”

The legislation to construct the Tribal Nation Flags Plaza was passed in the early 1990s. However, the funding didn’t happen until the 2019 Legislative session when Rep. Marvin Weatherwax, Jr. (D-Browning) introduced HB-524 to fund the construction of the Tribal Flag Plaza. It passed both houses of the Legislature with bi-partisan support and signed into law by Gov. Bullock May 23, 2019.

“This is an historic day,” Lt. Gov. Cooney said. “Eight Tribal Nation flags will fly for the first time with the American and Montana flags. Ten flags all equal, will fly at the same height because these governments are equal to one another.”