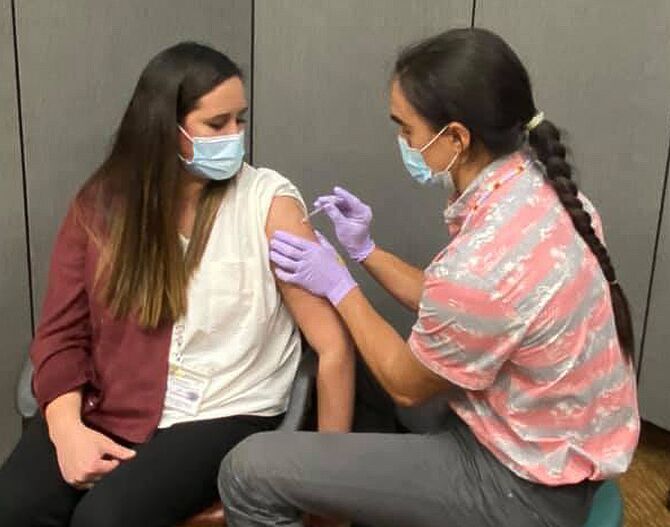 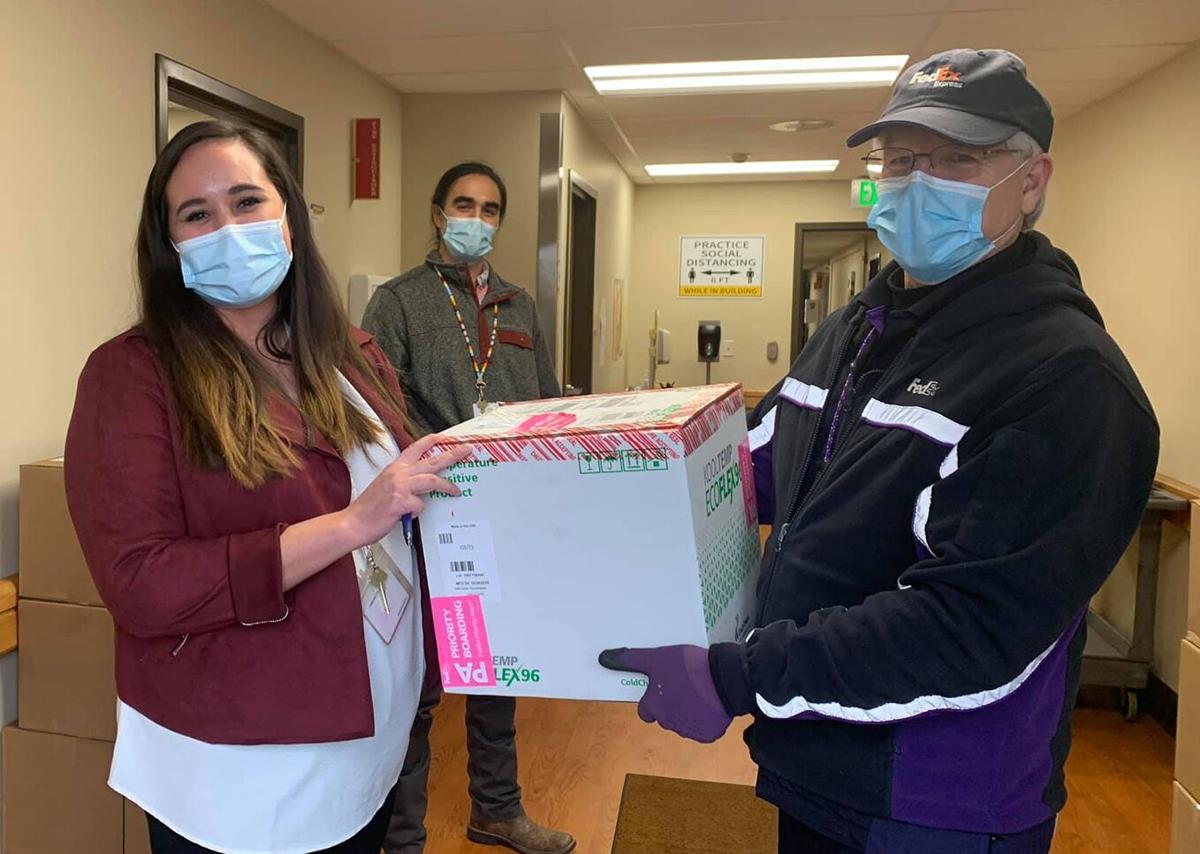 ST. IGNATIUS — Last week the Tribal Health Department received its first round of 100 doses of the Moderna COVID-19 vaccine from the Montana Department of Public Health and Human Services. The doses were used to inoculate the frontline healthcare personnel. The immediate targets for the next shipment of the vaccine will be other THD personnel.

THD Pharmacy Director Jesse Cahoon, ceremoniously received the first dose, administered by Clinical Pharmacist Cameron Neiss. Cahoon mentioned examples of the side effects of the vaccination that included muscle soreness and some feelings of illness.

According to the Food and Drug Administration, the most commonly reported side effects of the Moderna vaccine, which typically lasted several days, were pain at the injection site, tiredness, headache, muscle pain, chills, joint pain, swollen lymph nodes in the same arm as the injection, nausea and vomiting, and fever.

The Moderna vaccine, like the Pfizer vaccine, has to be administered in a two-shot regimen, 28 days/four weeks apart. Cahoon said, THD will remind its beneficiaries that receive the first vaccination when the next on is due.

THD Public Health Emergency Preparedness Coordinator/Community Health Nurse Tammy Matt received the second vaccination then the rest of the frontline providers received theirs throughout Tuesday. All of the first shipment of the Moderna vaccine was used for that initial target effort.

The Moderna vaccine mechanisms is near-mirror similar to the Pfizer vaccine.

THD is generally following the federal follow the Centers for Disease Control and Prevention and the Montana Department of Public Health and Human Services lead of order of vaccination.

Phase 1a: Healthcare personnel and people in long-term care facilities

Phase 1c: Adults with high-risk medical conditions and those 65 years and older.

Then the general population of adults, and youth 16 years and older.

When those vaccinations will happen depends on the supply availability and delivery mechanisms.

Moderna plans to have 20 million doses ready for the U.S. by the end of December. Recipients will need two doses, so that’s enough for 10 million people.

Pfizer expects to have 50 million doses available globally in December. Twenty-five million doses are earmarked for the U.S. The vaccination also requires two doses, so that will be enough to vaccinate 12.5 million people.

Moderna aims to produce at least 500 million doses next year, with the possibility of scaling up to 1 billion doses depending on the availability of raw materials. Pfizer aims to make 1.3 billion doses in next year.

The CDC estimates that the at-risk population should be vaccinated by February or March, and the general public by June or July.

‘Last Responders’ brace for surge in COVID deaths across US