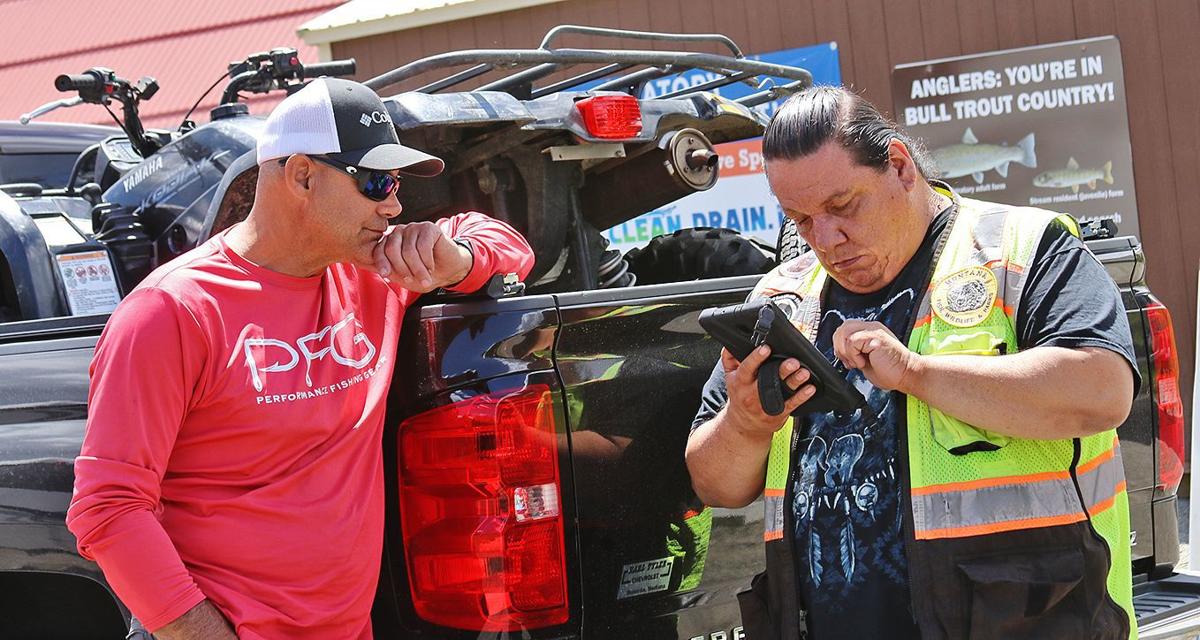 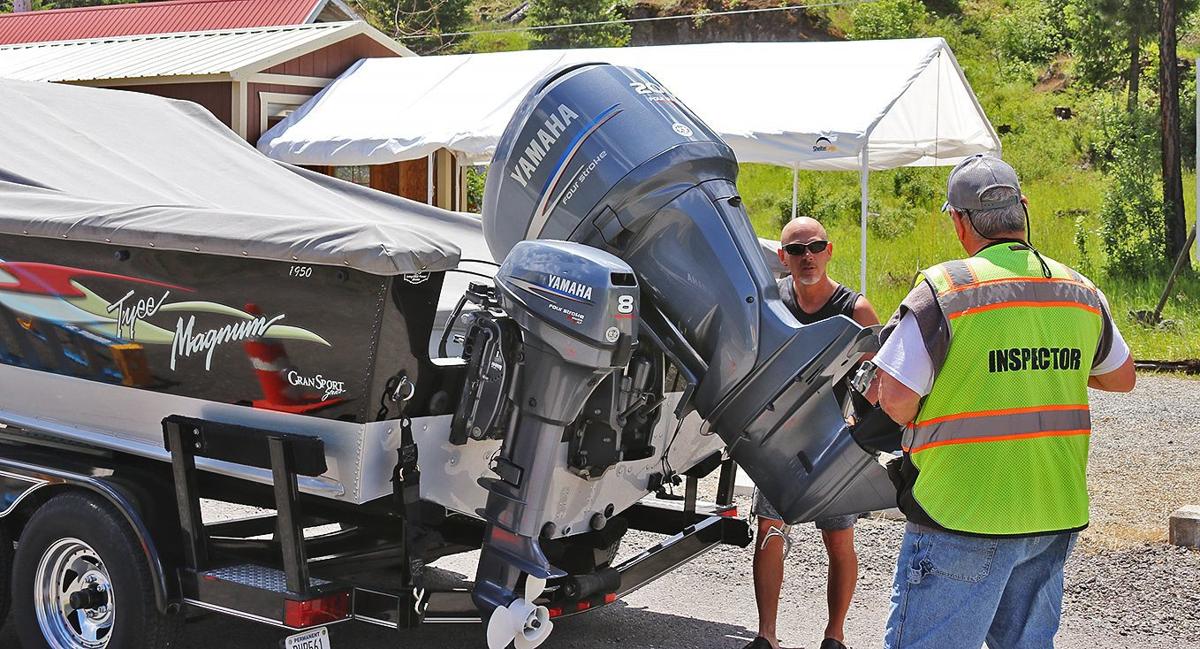 Thompson Falls CSKT AIS inspector Joe Frost asks Jeff Mayfield of Missoula to open the boat covering so he can inspect the rear portion of the boat.

The CSKT Mussel Busters, are David Sorrel, Bodean Morigeau, Joe Frost and John Stevens. It’s been a tad slow due to the bridge construction at Trout Creek. That has slowed down all traffic not just boats because the bridge has been completely destructed and as a result rerouted traffic.

RAVALLI — The boating and inspections at the Montana Department of Fish, Wildlife and Parks inspection stations have increased lately with the full-blown arrival of the summer recreation season. The Confederated Salish and Kootenai Tribes operate two of the stations at Ravalli and Thompson Falls, and the Blackfeet Nation operate one at Browning under a contract with FWP.

“The boating traffic is picking up but not like last year, so far,” said JaBleau Arlee, CSKT Aquatic Invasive Species program inspection station supervisor, Friday. “There is more out of state boats than before and that traffic began earlier than before. I think that is do to the coronavirus and snow-birds coming back earlier than before.

“Yesterday we had more than 100 inspections by 11 (p.m.),” Arlee said, adding that Thursday, Friday and Saturday are peak recreational watercraft inspection days, and Sunday inspections are mostly for fishing watercraft.”

Arlee said neither the Ravalli nor the Thompson Falls inspection stations have detected any mussel fouled watercraft.

The Friday traffic at the Ravalli was steady, keeping inspectors busy. One of the boats inspected belonged to Jim and Sharon Schroeder of Stevensville. The couple were on their way to Flathead Lake. They were in full support of the inspections.

“There should have been inspection stations at all border entries long ago, before they were detected,” Jim Schroeder said, adding that the state should have been aware of the potential of mussel infestation because of the out-of-state infestations. “The testing is fine by me.”

However, not by all and they have expressed that at Ravalli and Thompson Falls.

“Last week a guy wouldn’t lower the motor on his boat,” said David Sorrell at the Thompson Falls inspection station. “He said, ‘I’m not going to do that.’’’

Sorrell explained the reason for the inspections and why he had to inspect the boat. “I have to do my job,” he told the disgruntled man. “I have to fully inspect every boat, every time they come here.”

Sorrell told the boat owner from Idaho that he could talk to supervisor Arlee. He declined to talk to Arlee, and still refused to let his boat be inspected. Arlee told Sorrell to call local law enforcement. So, he did.

The police told him to acquiesce to the inspection or get ticketed and boat impounded. “Instead of being here for a few minutes for the inspection, he was here for an hour and a half and got a full inspection that included a hot wash on the lower part of the boat.”

A couple of Missoula boat owners that stopped for inspections that day were aware of the need to test watercraft.

“The inspections are necessary. I’m willing to take the time to stop and get inspected because I don’t want to be a transporter of mussels” said Jeff Mayfield. “I love to fish. Everyone has to do this to protect the waterways so they are here without mussels next year and we can enjoy fishing.”

The remaining inspections were conducted of on Montana water-craft.