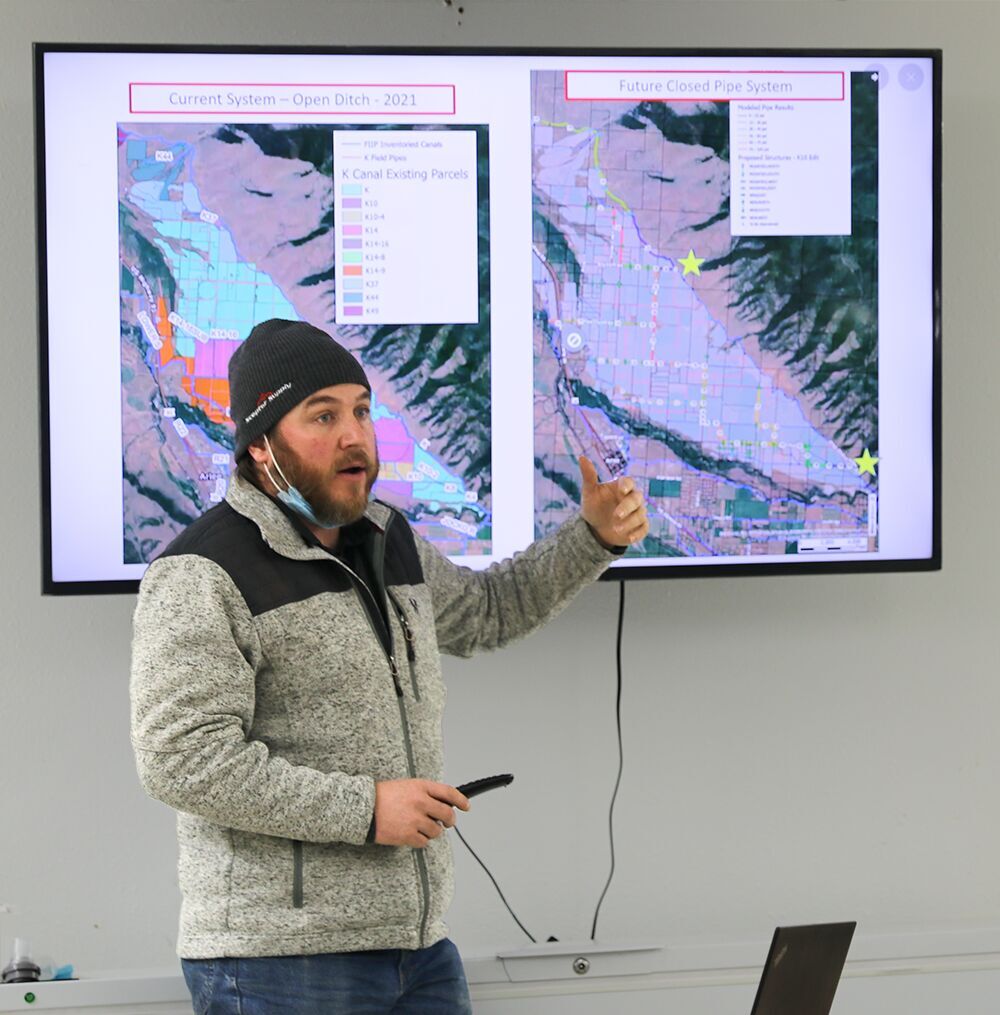 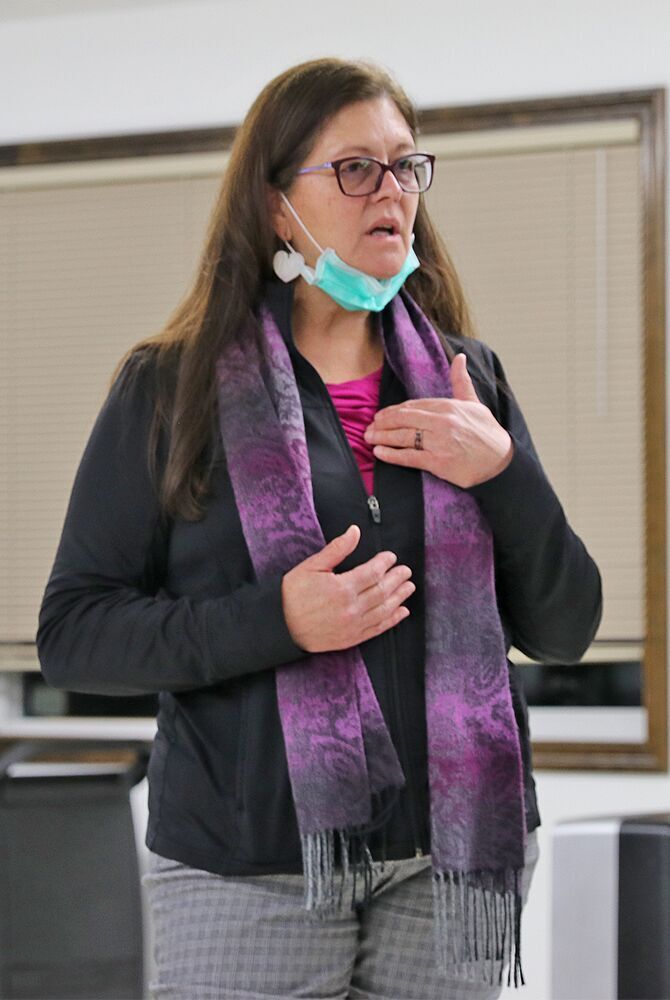 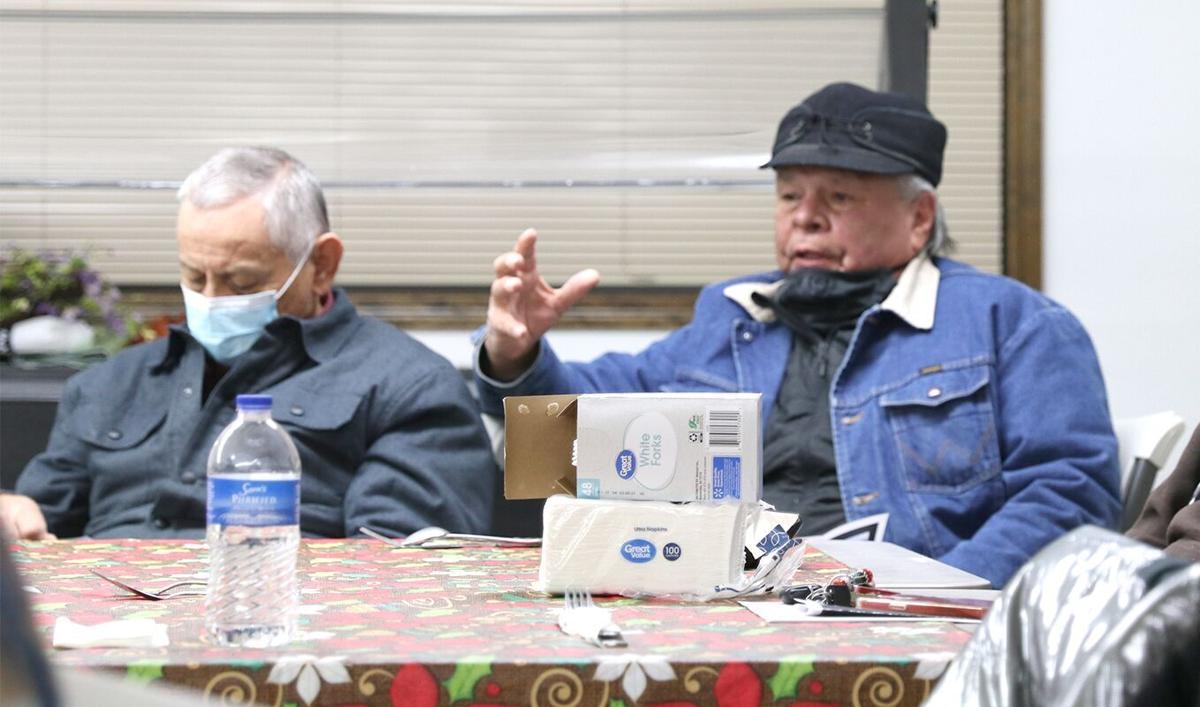 Carmen McClure poses a question at the Arlee District meeting.

FLATHEAD RESERVATION — The starting gun has sounded and the rubber has started to meet the road with the Flathead Indian Irrigation Project reconstruction project. The reconstruction of the dilapidated FIIP, that was authorized by the U.S. Congress in 1904 as part of the Flathead Allotment Act and began operation in 1910, is the big cog in the Flathead Nation’s Federal Reserved Water Rights Compact (FRWRC) settlement.

The FIIP serves approximately 127,000 acres of Flathead Reservation land, and was built to serve the members of the Confederated Salish and Kootenai Tribes on their irrigatable land allotments. However, now the land it serves is around 90 percent non-Indian owned.

In a 1914 Homestead Act of Congress the Flathead Reservation was opened to non-Indian settlement. Under provisions of the act the non-Indian irrigators were required to pay the cost of construction of FIIP, as well as its operation and maintenance (O&M) fees. However, through the years the irrigators were not able to adequately repay their portion of the cost of construction, as well as the operation and maintenance fees.

A 1936 Congressional Report focused on, among other things, the delinquent construction, and operation and maintenance fees due to FIIP. As a result of the subsequent Walker Document report, Congress passed an Act on May 25, 1948, that provided for a permanent subsidy of the cost of the FIIP construction, and O&M via a line item on power bills of all customers of the Flathead Indian Power Project — now known as Mission Valley Power. Through the years the O&M fees were eventually passed onto the irrigators. The cost of construction was finally paid off in 1998 by the FIIP, then the MVP rate players.

Now the Flathead Nation’s FRWRC settlement includes $900 million to pay the cost of reconstruction of FIIP to better serve its irrigators while protecting and enhancing the available water on the Flathead Reservation via improved irrigation delivery system management and conservation efforts.

The Bureau of Indian Affairs manages the FIIP system that includes several dams and reservoirs as well as 1,300 miles of canals extend throughout the Flathead Indian Reservation, Lake County and Sanders County.

The Flathead Nation’s FRWRC, also known by its Senate Bill S. 3019 moniker as the Montana Water Rights Protection Act (MWRPA), was passed by Congress in 2020 and signed into law by President Donald Trump in late December 2020 as part of addition to an omnibus spending bill. Following that the CSKT, the State of Montana and the Montana Water Court signed off on the MWRPA that codified the Flathead Nation’s FRWRC. It became effective on September 17, 2021 when the Secretary of the Department of Interior Deb Haaland signed the MWRPA that formally enacted it. The MWRPA was introduced in the U.S. Senate by its sponsors, Sen. Jon Tester (D-Mont.), and Sen. Steve Daines (R-Mont.)

The $1.9 billion FRWRC settlement trust fund is the largest monetary settlement of any Tribal Nation reserved water rights settlement. The Flathead Nation will be allocated $90 million annually for 10 years for the FIIP reconstruction project.

Prior to receiving any of the CSKT settlement funding, the BIA allocated about $500,000 to jump start the reconstruction of the FIIP K-Canal North Project that serves the Jocko Valley lands north of the Jocko River. The funding was allocated for the reconstruction of the K-Canal diversion infrastructure at the mouth of Jocko Canyon. It diverts Jocko River water into the K-Canal trunk line that flows northwesterly up and along the Jocko Valley to its end in the Spring Creek area.

The work is scheduled to begin this summer on the rehabilitation and betterment of the K-Canal trunk line section and service lines that serves FIIP Jocko Valley footprint in that section of the system. It will cost an estimated $21 million, and take approximately four years to complete.

Much of the property served by the K-Canal trunk line feeder is gravity flow irrigation water while a significant amount of the valley floor land use pumps to irrigate from the service canals.

The K-Canal trunk line immediately coming out of the Jocko Valley will remain an open canal with improvements that include animal escape areas. Where that open lined K-Canal ends near the northward curve of the valley a 48-inch buried pipeline will be installed. The pipeline will have a pair of pumps — one at the head of the pipeline and another further down — that will allow for flow pressure of 70 to 80 pounds. It will contain a pressure-reducing system to adequately serve the irrigation draw and minimize the waste of Jocko River water. The system will be able to handle enough flow to service a full system water draw.

It will also have self-cleaning screens thus eliminating the need for irrigators to consistently check and clean their pumps.

The reconstructed buried service pipelines that will eliminate much if not all of the service ditches will be pressure served thus eliminating the need for land owner irrigation pumps. The pressure reducing system will manage the irrigation draw to lessen or eliminate the likelihood of blown irrigation heads. The FIIP is fiscally responsible for the tie-ins of existing private systems to the reconstructed feeder systems.

“In some areas of the present (open canal) system it takes 6-acre feet of water at the headworks to get 1-acre foot of water on the irrigated land,” Smith said. “With the reconstructed system the water management by the Tribes, and the BIA irrigation project delivery management the water draw from the Jocko River won’t be as much as it has been in the past, and will ensure in-stream flows.”

“We will be doing more, with less manpower,” Smith said. “The Jocko (K-Canal North) system reconstruction is a home run right off the [first strike of] bat.”

The reconstructed system with meters will allow an irrigator to turn on and off their own water and receive in an hour or less of lag time.

Smith said much of the rehabilitation of the irrigation project includes water management systems that are new to the area but are old school in the Southwest and in states like California, Nevada and Utah.

Other projects on the radar include:

• The Tabor Diversion on the North Fork of the Jocko River and feeder canals modernization and betterment project. It will cost an estimated $25- to $30-million. It is in the early engineering stage, and will take five years to complete. The work will begin in the summer of 2023.

• The Lower J Canal diversion rehabilitation and betterment project that begins at Ravalli and serves lands west to the Revais Creek area. The final design of the project is underway with the preferred design estimated cost of $5.8 million, and an alternative design estimated cost of $4.6- to $17.8-million. It is the early planning stage and the preferred design will take one year to complete. The work will begin in the fall of 2022.

• The Charlo delivery area modernization is in the early planning phase that will develop the scope of the project. In that scope of work will be diversions, canals, reservoirs and water management projects. The project could take up to 10 years at a cost of $200 million. The work will begin in the fall of 2023.

Smith said the Charlo delivery area modernization project is the most complex, most time consuming and the most expensive of the FIIP Reconstruction Project. And it has the largest amounts of irrigation water run-off and the biggest impacts on the instream flows on the Flathead Reservation.

To curb the run-off, there are plans to install a 200-horse power pumping system in Dublin Gulch that will pump the run-off back to Ninepipes Reservoir.

The initial reconstruction projects are just the beginning of the Flathead Nation FRWRC settlement. The above projects and others on the drawing board will noticeably change the water management, water use and water delivery system on the Flathead Reservation where water is sacred in the spiritual traditions of the Salish, Pend d’Oreille and Kootenai people. It is, after all the penultimate pillar of the sustenance of all human and non-human life on Mother Earth.