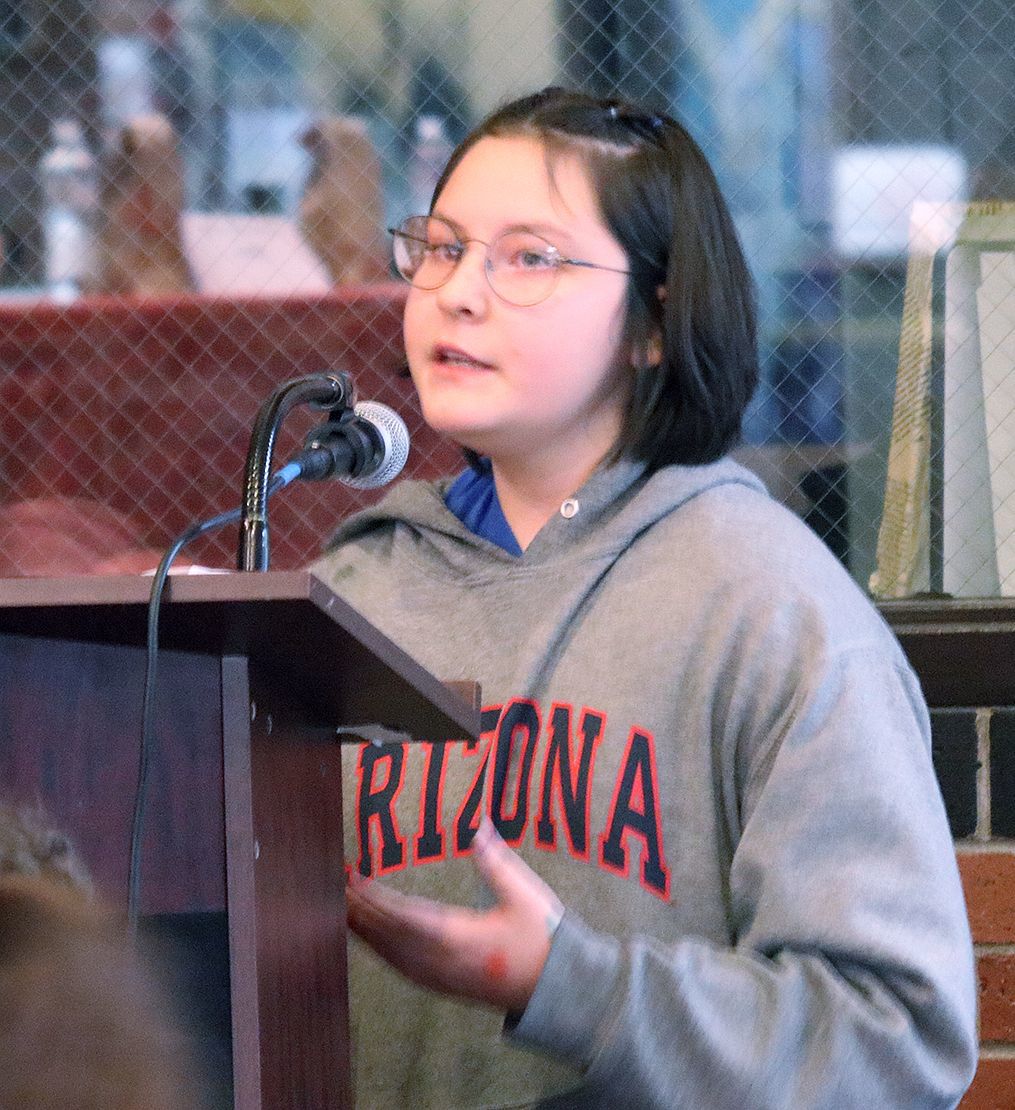 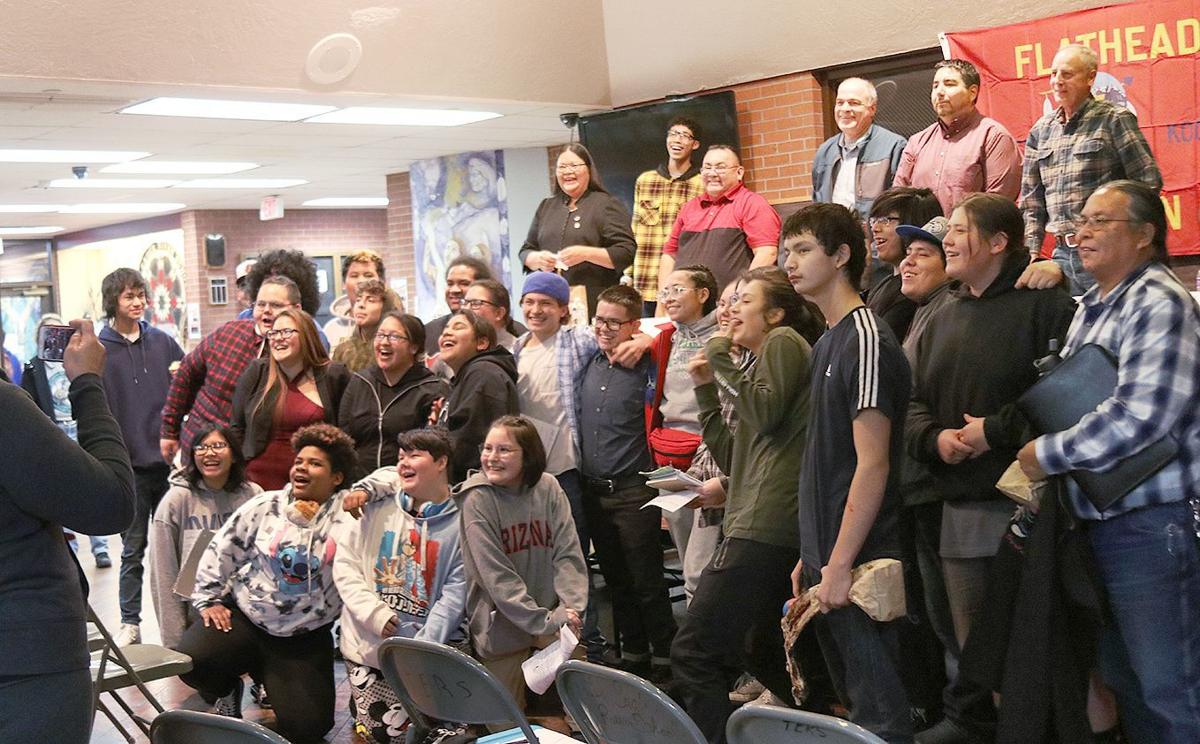 Tribal Council candidates get ready to get their messages out a the TERS candidate forum.

PABLO — The Tribal Council Candidates Forum at Two Eagle River School facilitated by TERS students gave the tribal electorate insight on where they stand on issues facing the Flathead Nation and what they would bring to the district seat if elected to the governing body.

All the candidates understood the ultimate importance of the 1855 Treaty of Hell Gate that recognized the sovereignty of the Flathead Nation comprised of the confederacy of the Salish, Pend d’Oreille and Kootenai Tribes, and the ensuing Confederated Salish and Kootenai Tribes Constitution.

• St. Ignatius District candidate Willie Stevens said the Confederated Salish and Kootenai Tribes Constitution and the 1855 Treaty of Hell Gate would be the foundation he would stand on to guide his policy decisions to protect the rights of the tribal membership. He suggested that the membership read the bulwarks of the past, present and future existence of the Salish, Pend d’Oreille and Kootenai people.

He would advocate for the preservation of the tribal language, culture, traditions and the youth.

• Incumbent Dixon District candidate Anita Matt said there is a lot of work to be done on the Tribal Council menu of issues facing them and by extension the tribal membership. Among the prominent issue on her plate is the issue of illegal- and legal-drug misuse and the negative consequences. She would do the best job to address the issue.

• Incumbent Pablo District candidate Dennis Clairmont said the CSKT Water Compact, the National Bison Range and the Séliš Ksanka QÍispé Dam are the issues presently on his plate. Towards that end, he would rely on the expertise of the involved CSKT staff to guide his decisions.

• Pablo District candidate Martin Charlo said his relative youth and 14 years of experience as an employee with the CSKT would help him as a tweener relate to the needs of the younger and older generations.

• Hot Spring District candidate Michael Dolson said he would use his math and Indian Studies professor experience and knowledge honed in his 17 years at Salish Kootenai College. He would seek to clarify the relationship between the sovereign governments of the CSKT, United States and Montana that to this day remains unclear.

• Hot Springs District candidate Gene Lozeau said the district has been represented well in the past and would continue that by working within the bounds of the CSKT Constitution to further strengthen it. He said his post-high school education at SKC and the University of Arizona, and many years of working with the tribal youth well prepares him for the open seat on the Tribal Council.

• Incumbent Arlee District candidate Myrna Dumontier said her familial upbringing, education and experience as a teacher equip her well to advocate for the culture and values of the Salish, Pend d’Oreille and Kootenai people. She would champion the views of the tribal youth and listen to the membership and tribal professionals in the numerous issues facing the CSKT, especially the suicide and drug issues.

Queries from several TERS student and public focused on sovereignty, language, culture, blood quantum and thoughts on the future of the Flathead Nation.

• Martin Charlo said sovereignty is strengthened by forging a future less dependent on the federal government. To that end he would work to enhance economic development to create employment opportunities in the individual tribal communities. He said it is not wise economics to purchase property then sell it for less than it cost. He also advocates tribal voting in local, state and federal elections.

On tribal languages Charlo said the Tribal Education Department should work hard to influence what is taught in public schools, and use technology in a holistic approach. Parents also need to be involved.

• Dennis Clairmont said self-governance has been, is and will be a very important way to exercise Flathead Nation sovereignty to provide for the wellbeing of the membership and provide income. He said the CSKT have been adapt at economic development through its formation of enterprises, ala S&K Technologies. He suggested there is also potential to develop off-Flathead Reservation income producing entities.

• Anita Matt said jurisdiction issues are the penultimate problem the CSKT face. Improving economic development could be used to increase the prosperity of the tribal membership. Those issues could be better solved with plans for the education of the membership. She said the CSKT aren’t really an Indian tribe or nation without its culture and languages.

Matt said the Tribal Council has supported the tribal language revitalization effort and have funded those efforts. But she added that more is needed to accomplish the goals

• Willie Stevens said sovereignty is vital to the ability to self-govern and provide for the protection of the rights of the Flathead Nation and the people. Those shields are all in the CSKT Constitution and he would dedicate his incumbency — if elected — to strengthen the protective shields.

• Gene Lozeau said CSKT sovereignty has to adhere to the checks and balances of the Constitution and the sovereign tribal government has to listen to the wills and desires of the people, and that has to be protected.  That is enhanced by adherence to tribal traditions including traditional tribal laws and salvation of the tribal languages that would result in the restoration of the somewhat adrift tribal community in the dominant culture of the Western world.

Lozeau said language revitalization requires a personal commitment and there is a need to service the effort to combat what assimilation accomplished in Indian Country. He said with recent acknowledgement of the seriousness of the issue is hopeful.

• Michael Dolson said sovereignty is the ability to control the destiny of the Flathead Nation and its populace. The Treaty and Constitution contain the legal provisions for the development of ways to self-destiny including laws and ordinances that act as road signs to the future and can refine and define the relationship with the federal, state and local governments. It can also provide for educational opportunities for the membership.

Dolson said respect starts with tribal culture and the language as the Western ways are not the ways of the CSKT. The culture and languages were gifts from the Creator and respect is inherent in them.

• Myrna Dumontier said preserving sovereignty requires hard work on many fronts. Sovereignty provides for the reclamation of the tribal languages and culture as they are the foundation of sovereignty. Then sovereignty could be used as the base of tribal values to define the mission of the CSKT.

Dumontier said tribal employees should have access to at least one hour a day to take language lessons. Further, it should be built into the tribal employment system so program managers would have to honor the requests for employees that want participate. She also promotes summer language camps.

• On the issue of what the candidates hope for the future. They all agreed that the youth, including those at the forum, were the future. They have to be prepared for it first and foremost with a solid comprehensive education, involvement in the political process beginning with voting in tribal and non-tribal elections, and as candidates.

• On the issue of blood quantum, the candidates were generally in agreement that it has to be addressed. If not the federally mandated blood quantum requirement math for tribal recognition will result in the extinction of tribal people. A CSKT commissioned study a couple of decades ago when the issue was on the front burner locally, indicated that it could happen as early as 2050.

• The General Election is Saturday, December 14.