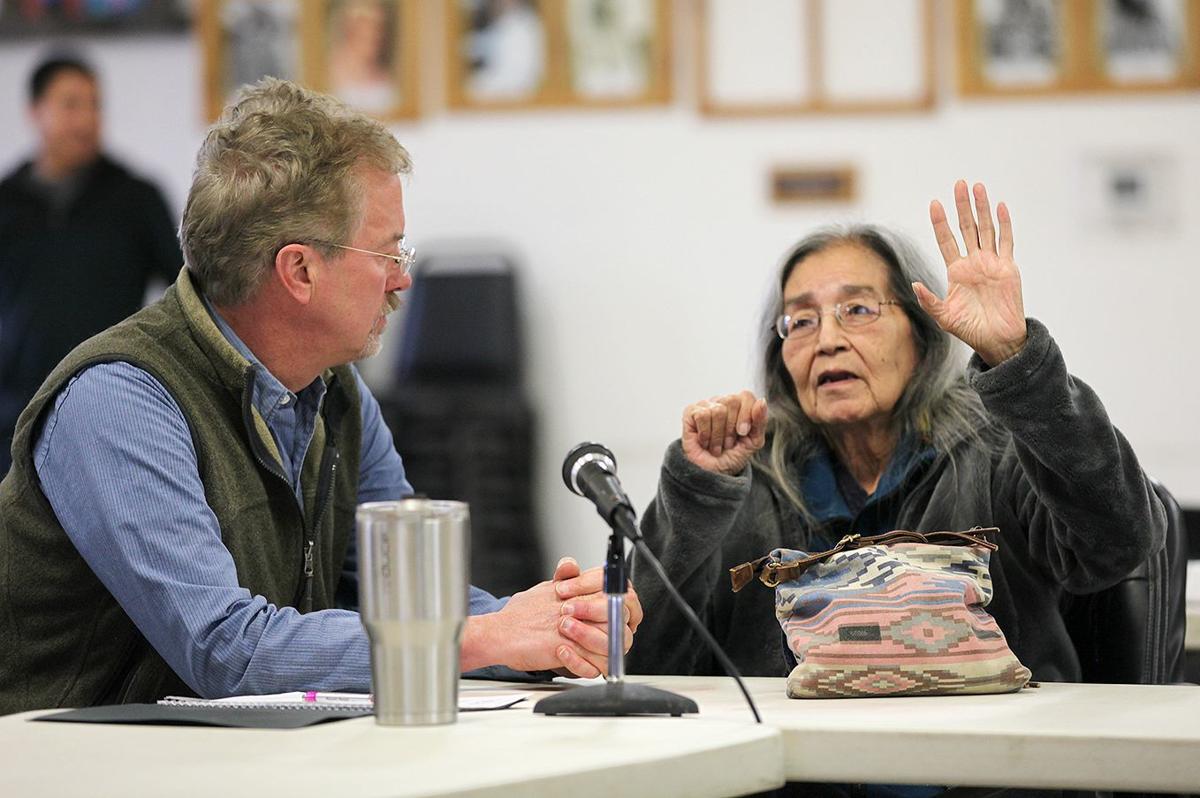 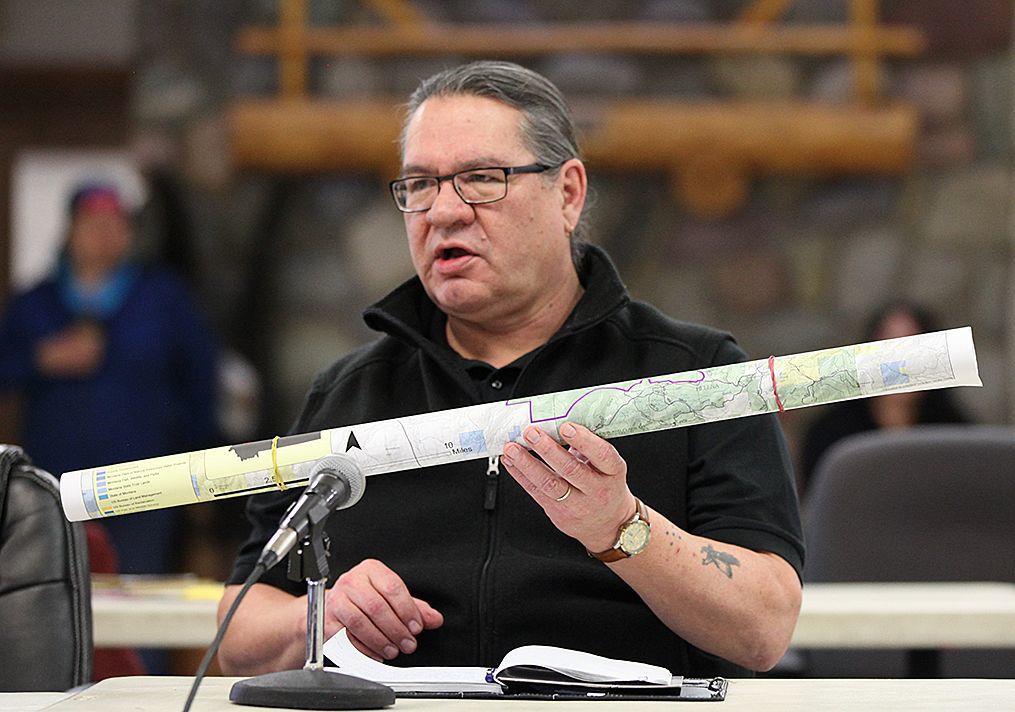 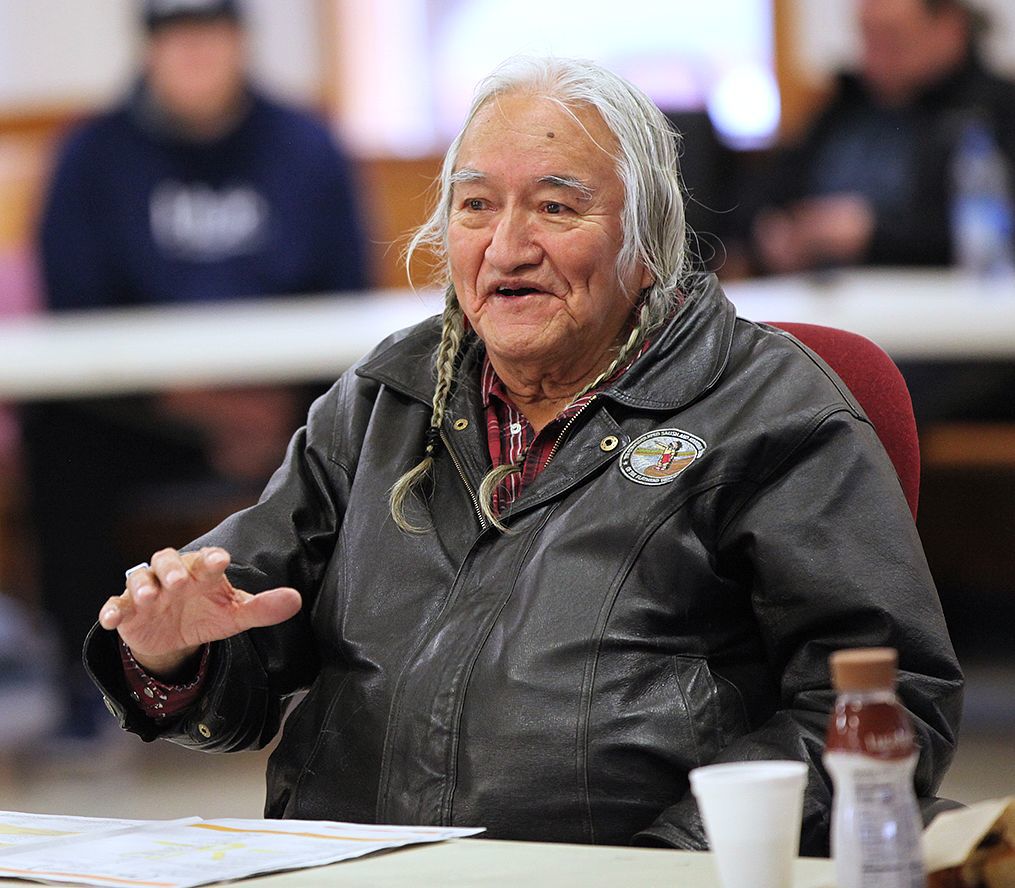 Elders Council member Stephan SmallSalmon chimes in about the issue of offerings left in tribal forests.

ST. IGNATIUS — Leave politics at the door. That was — of sorts — the New Years Resolution of Séliš-Ql̓ispéCulture Committee (SQCC) stated by Director Tony Incashola at the first Elders Council meeting of 2020, last Wednesday.

“We want people to keep their politics out of here, out there. Our focus in here is on cultural issues,” Incashola said. “We work hard to protect and preserve our culture for the Tribes as a whole. That’s where we need to stay. If anyone here has political issues they should take them to the Tribal Council.

“Our focus here is on the wishes of the people on these walls,” he said alluding to the portraits of the gone-on revered traditional cultural leaders of the Séliš and Ql̓ispé tribal people that grace the Longhouse walls. “They gave us what have here today, our identity, who we are.”

Incashola said he would work harder to strengthen that focus to in order to crystalize the gone-on Elders and long-gone Ancestors spiritual beliefs — as all things traditional have spiritual guiding signposts chiseled in the past to buttress the tribal people walking in today’s world and in the world of those yet to come. In sum, it’s survival and respect.

“Think about our parents, grandparents and our Ancestors and the gifts they gave us. The gift our language, the gifts of our traditional culture,” he said. “I would encourage those seeking guidance to come here, especially the youngsters, like those here today [from Nkwusm]. They are our future. Someday they will be replacing us and speaking on behalf of the Tribes to those who come here for cultural guidance.”

Incashola said he felt that in the last few years the foundation of the SQCC and tribal traditional culture has been weakened a bit by tribal folks who don’t recognize the importance of the culture, and the language.

“A lot of tribal members and our own leaders look at the Elders Council as something in the way,” he said, adding that at times some tribal employees often have difficulty getting time off to attend cultural events that occur during the workweek. “In some ways that’s good, at least they know we are here. Here to remind them where they come from. We want to strengthen that knowledge of our ways. Respect our Elders they are here to give guidance, not to argue politics.”

Kevin Askan of the Preservation Office said cultural resource work continues on a proposed 15-lot subdivision and the replacement of some large boat docks near Trout Creek along the banks of the reservoir created by the Noxon Rapids Dam on the Clark Fork River.

Preservation is working with Noxon Rapids Dam operators, Avista Utilities, towards potential mitigation of the damage done by the projects to — so far — a couple of cultural sites there identified by Preservation.

“We will be meeting with Avista in February to talk about the boat docks,” Askan said.

Askan said Preservation is planning to add contract anthropologist to conduct research some of its projects. The Office is now short two cultural research positions but plans on filling the positions in the spring.

Kyle Felsman said the Preservation Office conducted approximately 400 cultural resource reviews in the aboriginal area of the Tribes, 124 on the Flathead Reservation and the remainder off, mostly on U.S. Forest Service lands.

Felsman said a lawsuit has been filed against the operators of the 14 dams on the Columbia River related to the environmental degradation caused by them. There are 12 categories within the suit and cultural resources damage is one of them.

“The court requires us to quantify the effects of operation within five years,” Felsman said. “We already have a good foundation of information to stand on if we go to court.”

Other Preservation projects include a proposed clearing and thinning if understory brush and shrubbery as well some trees on more than 100,000 acres in the Bitterroot National Forest in order to reduce fire fuels in the urban-wild land interface — it is a multiyear project.

Preservation has to come up with a dollar value on the mitigation of the North West Energy power-line reconstruction on right-of-way through aboriginal territory. Also it is working on mitigation of the operation of the Anaconda Smelter on cultural resources along the Clark Fork River drainage.

Preservation has received notice from the CSKT Forestry Department related to cultural offering sites and will be seeking Elders Council guidance on how to handle the issue. Most are off the beaten path in one of the units Forestry has identified for potential projects in.

“That’s been going on a long time,” said Elder Stephan SmallSalmon. “People have been taking offerings way up where people can’t see them.”

Incashola said the Elders Council would discuss the issue further with Preservation.

The next SQCC EC meeting is Wednesday, Feb. 4, at the Longhouse.