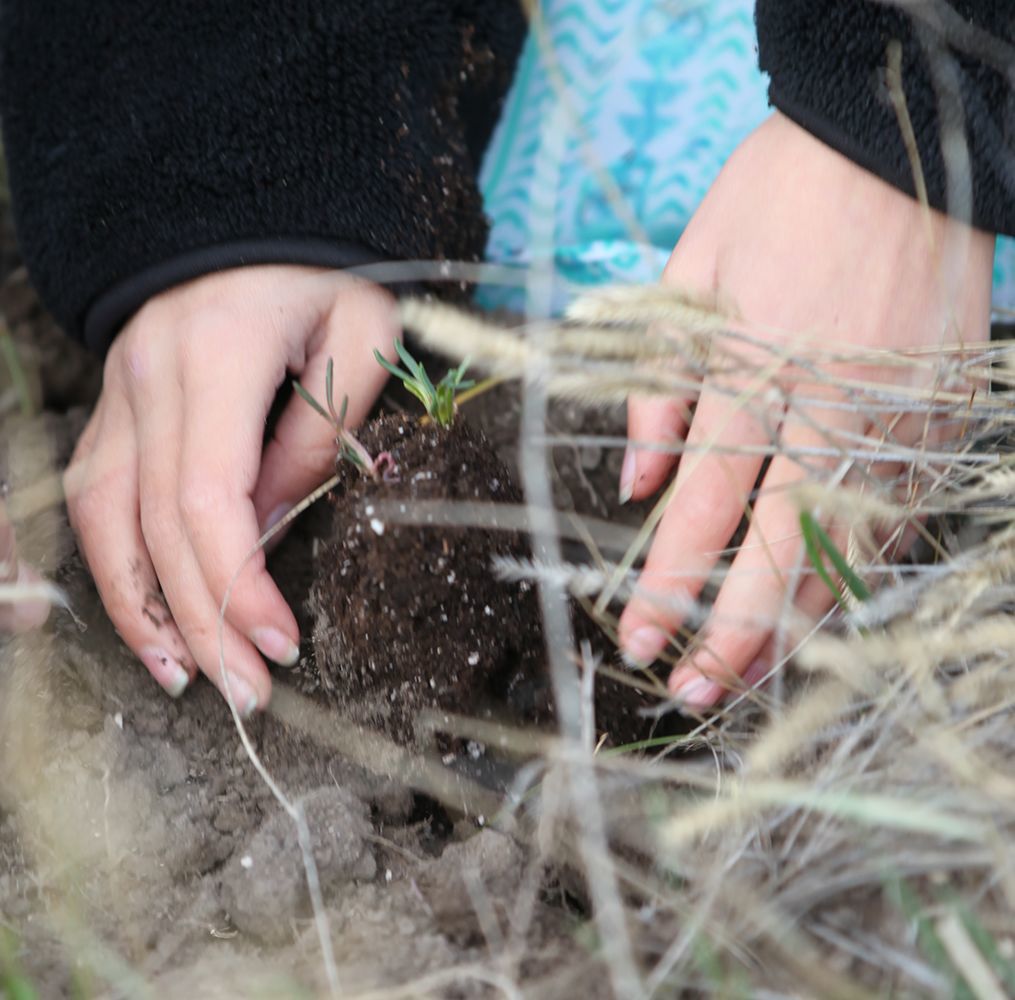 The folks involved in the Fort Missoula Regional Park bitterroot planting began the day with a prayer. 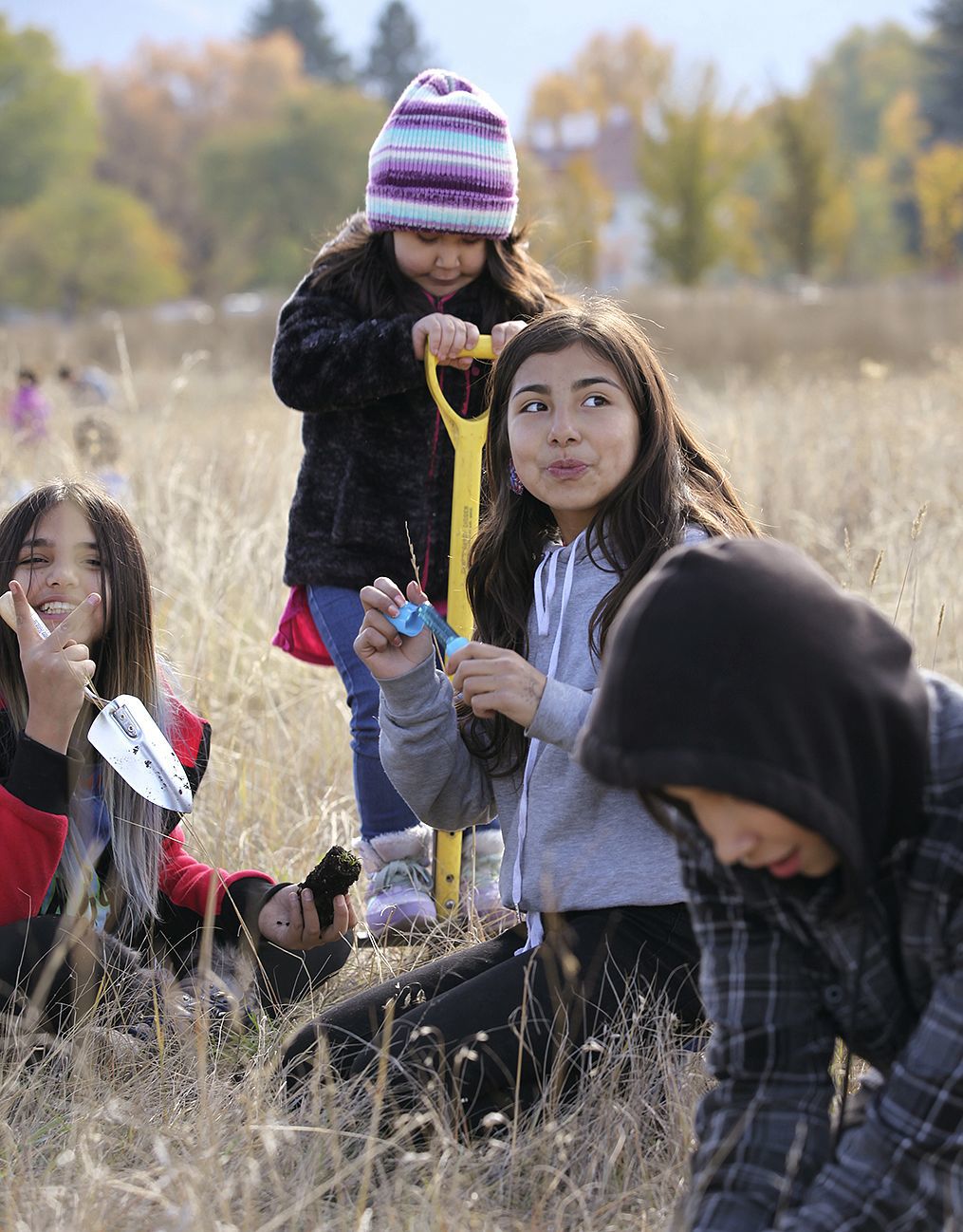 These Nkwusm students will someday pass on their memories and responsibilities learned last week while planting bitterroot at Fort Missoula. 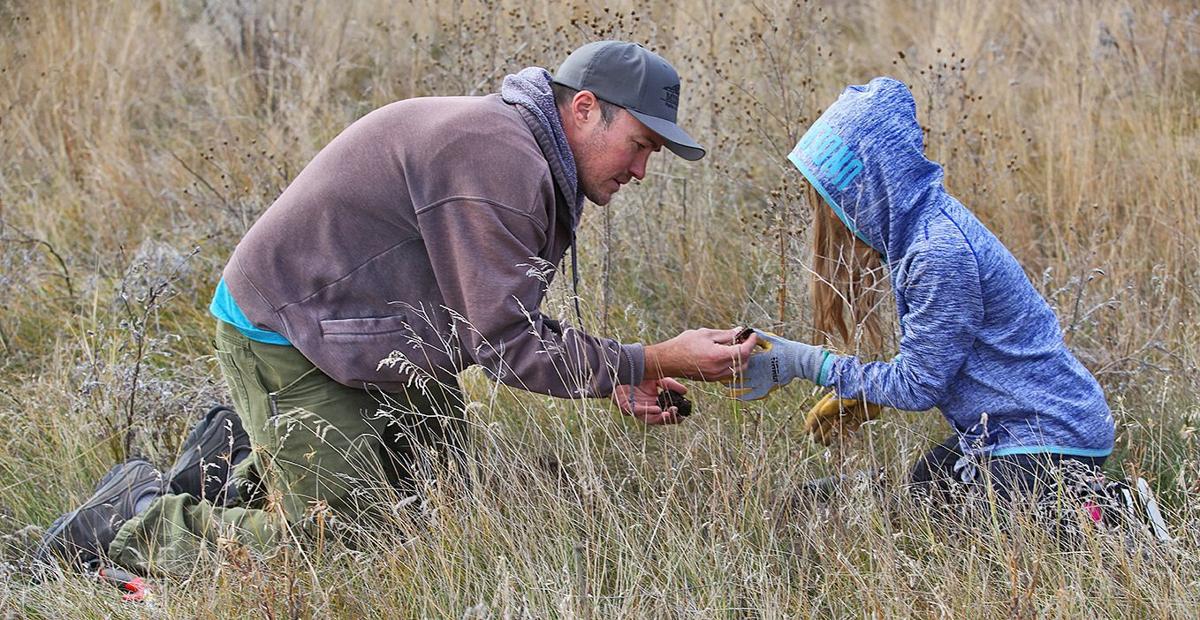 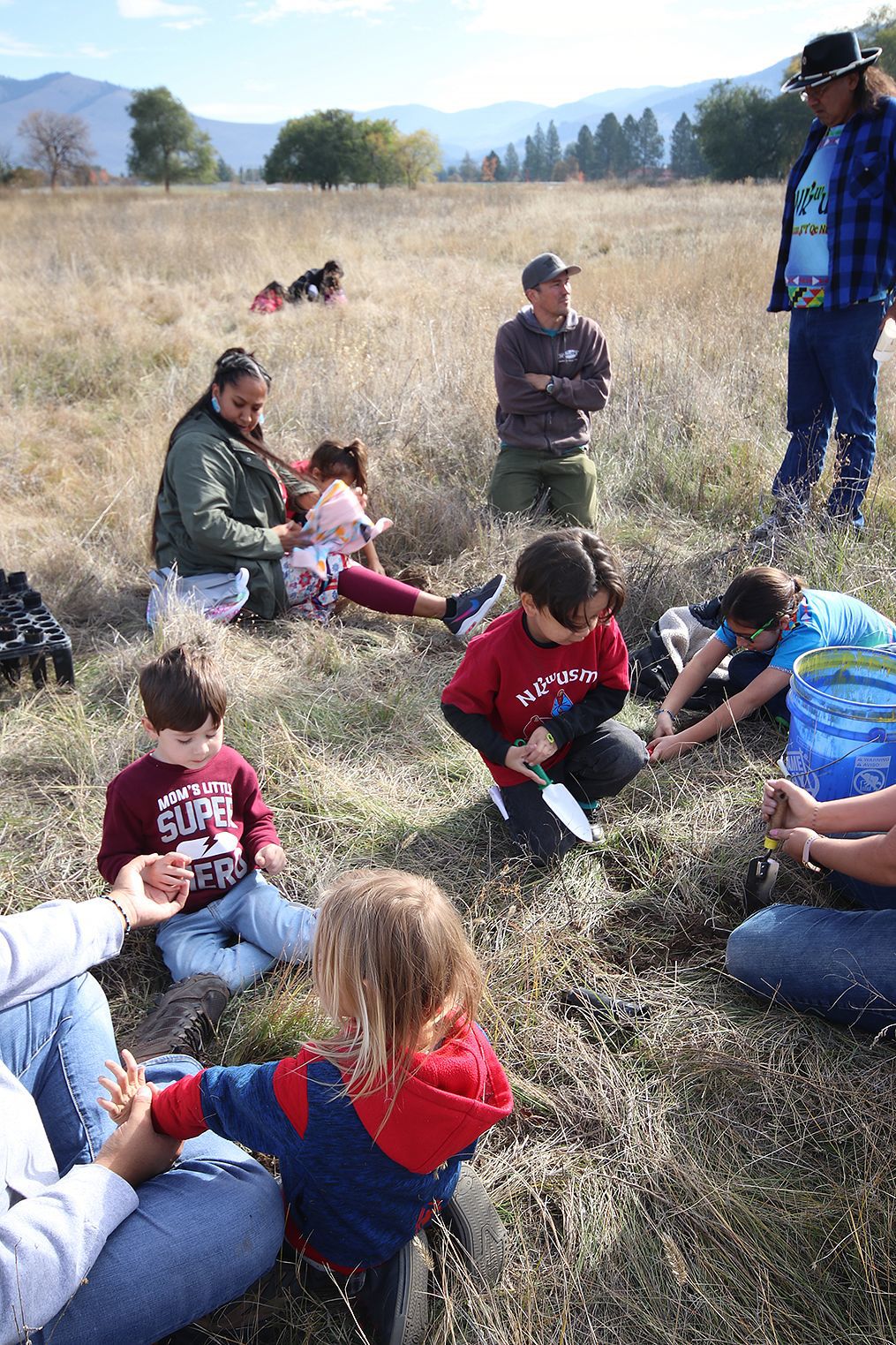 This 18-acre open space plot at the regional park will become an area of plants indigenous to the area including the bitterroot.

The folks involved in the Fort Missoula Regional Park bitterroot planting began the day with a prayer.

These Nkwusm students will someday pass on their memories and responsibilities learned last week while planting bitterroot at Fort Missoula.

This 18-acre open space plot at the regional park will become an area of plants indigenous to the area including the bitterroot.

Last week descendants of the Bitterroot Salish from Nk̓ʷusm Salish Language School and Two Eagle River School as well as teachers, cultural advisors and parents motored from the Flathead Indian Reservation to the Fort Missoula Regional Park to plant an estimated 900 bitterroot plants.

Half of the plants came from the Confederated Salish and Kootenai Tribes Forestry Department greenhouse and the other from the City of Missoula greenhouse.

Nearly 50 students then planted the 900 bitterroot plants in a 18-acre open field that is covered with many non-native invasive plants — most notably knapweed.

“This open-space land is being managed to promote biodiversity,” said Missoula Parks and Recreation Conservation Lands Manager Morgan Valliant. He said the planting bitterroot in the regional park open space came from discussions with Tribal Councilwoman Shelly Fyant at the November 2018 dedication of the Missoula County Board of Commissioners meeting room named after Sophie Moiese, a revered traditional Salish woman.

That discussion sparked the current effort to plant bitterroot at Fort Missoula Regional Park. However, the CSKT, Missoula County, and Missoula Parks and Recreation have been working together since 2016 to restore the culturally and spiritually significant food source of the Salish and Pend d’Oreille people at the regional park.

“We had heard stories about the natural vegetation in this area so we met with Tony Senior and Tony Junior about restoring the bitterroot plant in the natural area here that is so important to the Salish,” Valliant said. “In that organic discussion we said, ‘Let’s do it.’ A great partnership has resulted with this project. And a real cool thing is having the kids involved planting bitterroot. That hands-on experience nurtures the cultural seeds planted in their heads. This links them to the earth and to their culture.”

A couple of years ago Parks and Recreation planted more than 50 bitterroot plants but they were eaten by ground squirrels. This year they big-timed the number of plantings.

“We would like to carpet bomb this area with bitterroot plants,” Valliant said. “Our management goal is to have bitterroot all over this natural area and bring back the natural disturbance such as fire to manage this area. Next year we will be planting at least 1,000 bitterroot plants.”

Last Wednesday, the young students mini-bombed the Fort Missoula acreage with the 900 plants.

“This is good for the kids to be involved in this. They are getting the connection to the Ancestors, to the tribal Homeland and to the traditions,” said Allen Pierre of Nk̓ʷusm. “They learn and understand that, and their responsibility to give back to Mother Earth what was given to them. Today we are giving back. It’s always good to give back to Mother Earth. The students will have a sense of purpose and pride knowing that they are a part of this effort to restore this area with one of our prime food sources.”

Pierre said the Missoula Homeland area before it was developed by the dominant society was a prime source of bitterroot.

“When I would come to Missoula with my dad (the late-Pat Pierre) he would show me the places he’d come to pick bitterroot here,” Pierre said. Much of west Missoula west of Russell Street was still relatively undeveloped and rural in the 1930s when the elder Pierre and other would come to the area with adults to pick bitterroot. “The best area back in his youth was where the Shopko store was located.”

Pierre said he was thankful for the collaboration among Missoula County, the City of Missoula and the CSKT because the area will now give the tribal people another place to harvest bitterroot once the effort takes hold.

“We will now have another place to come together and practice our traditional ways,” Pierre said. “As long as the kids understand what we are doing here, helping Mother Earth, they will understand the spiritual connection. This helps with their self-identification that they will pass onto their kids, and those kids to their kids.”

Valliant said the bitterroot planting is the first step in the reintroduction of the bitterroot in its once natural growth area. The goal is to establish a successful bitterroot source on a large scale on the acreage so tribal folks can come to the area and harvest the bitterroot annually. However, that will take several years. But this first step is the most important: bitterroot was planted by young hands that someday will be older hands holding the young hands of their children, telling them with pride, “We did this.”

Arleen Adams said she got a spiritual uplift witnessing the planting of the vital food source in the Aboriginal Homeland by the youngsters attuned to the importance of the Salish language and history.

“This is it, our homeland, even here in Missoula. Everywhere we go around here is our homeland.” Adams said. “It’s just awesome to see these young kids here, planting bitterroot and speaking Salish, especially speaking Salish,” Adams said in reference to the Nk̓ʷusm Salish Language School students. “This is what dad (the late-Louie Adams) would’ve liked to see, he would’ve been here early, waiting for the kids to come and get in touch with the Homeland.”

And touch the hearts of the Ancestors.