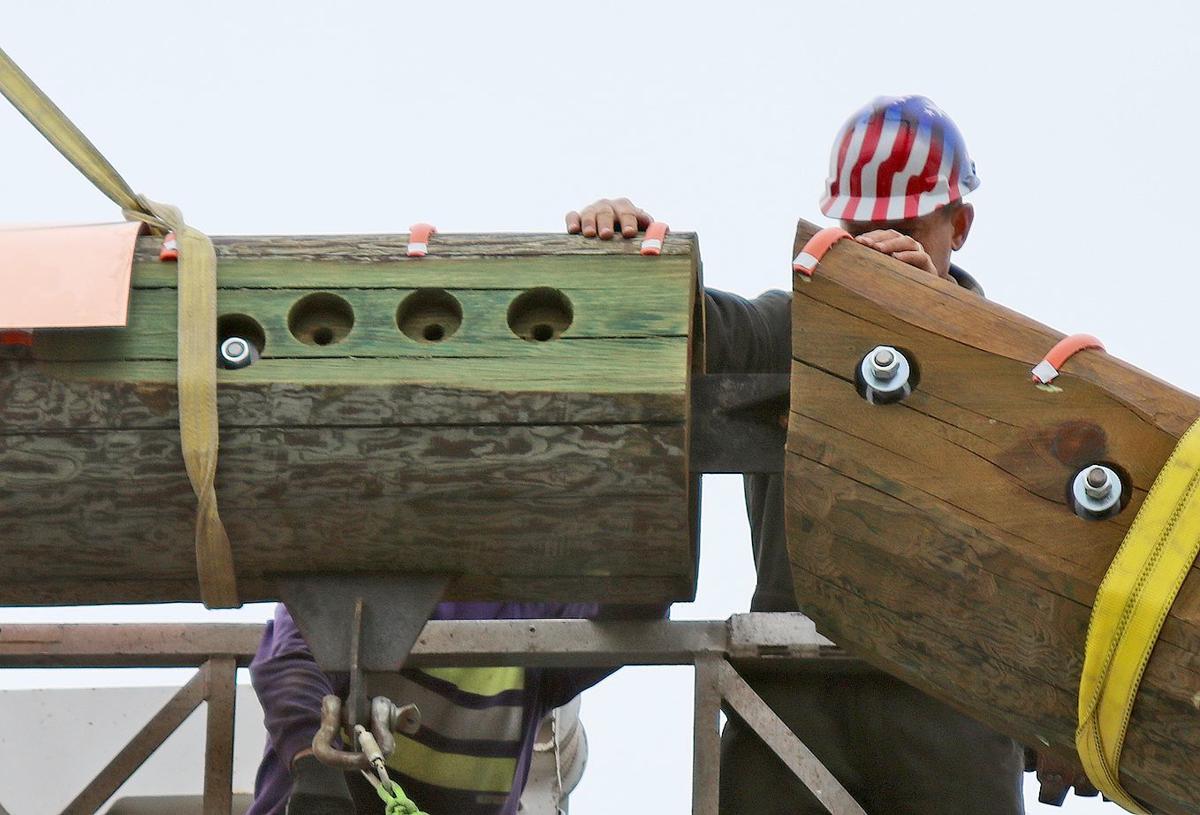 The coupling is nearly complete of the horizontal and leaning vertical components of the Ronan Arch. 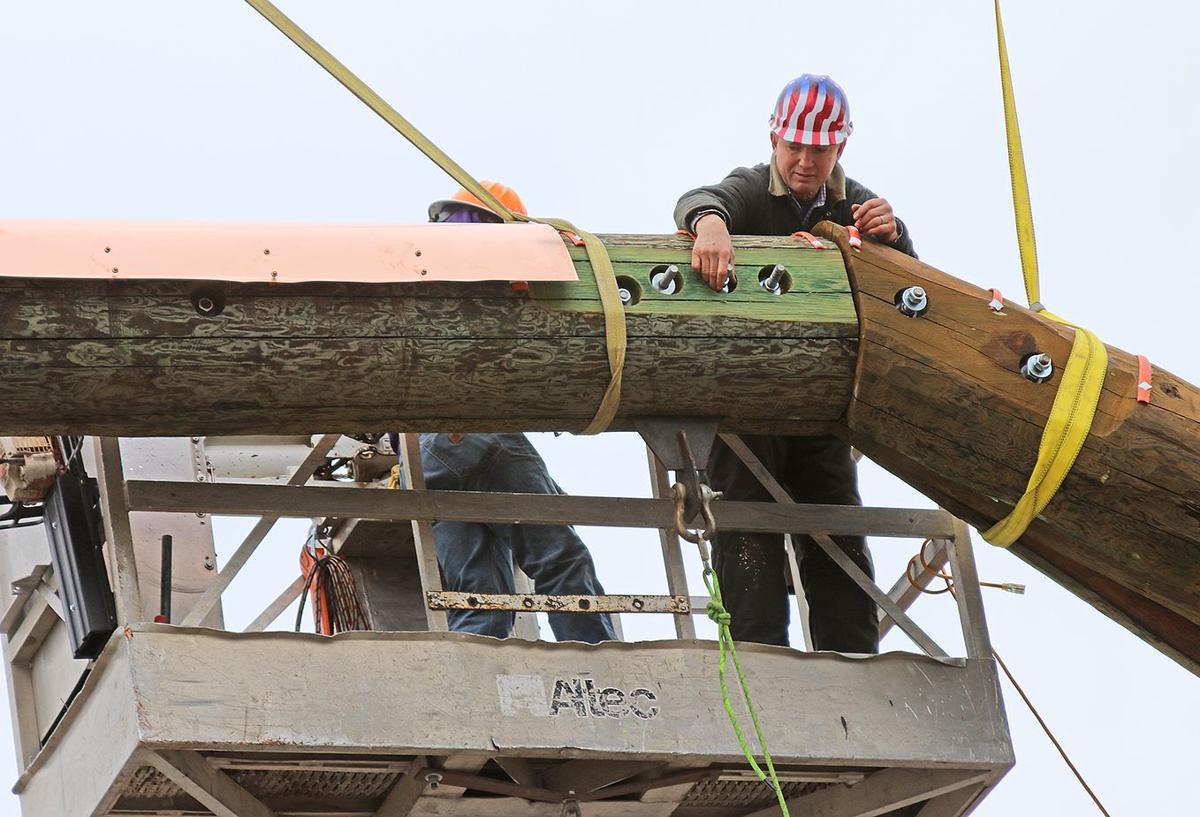 Placing the nuts and bolts that secure two pieces of the arch is a sign that the day’s work is nearly finished. 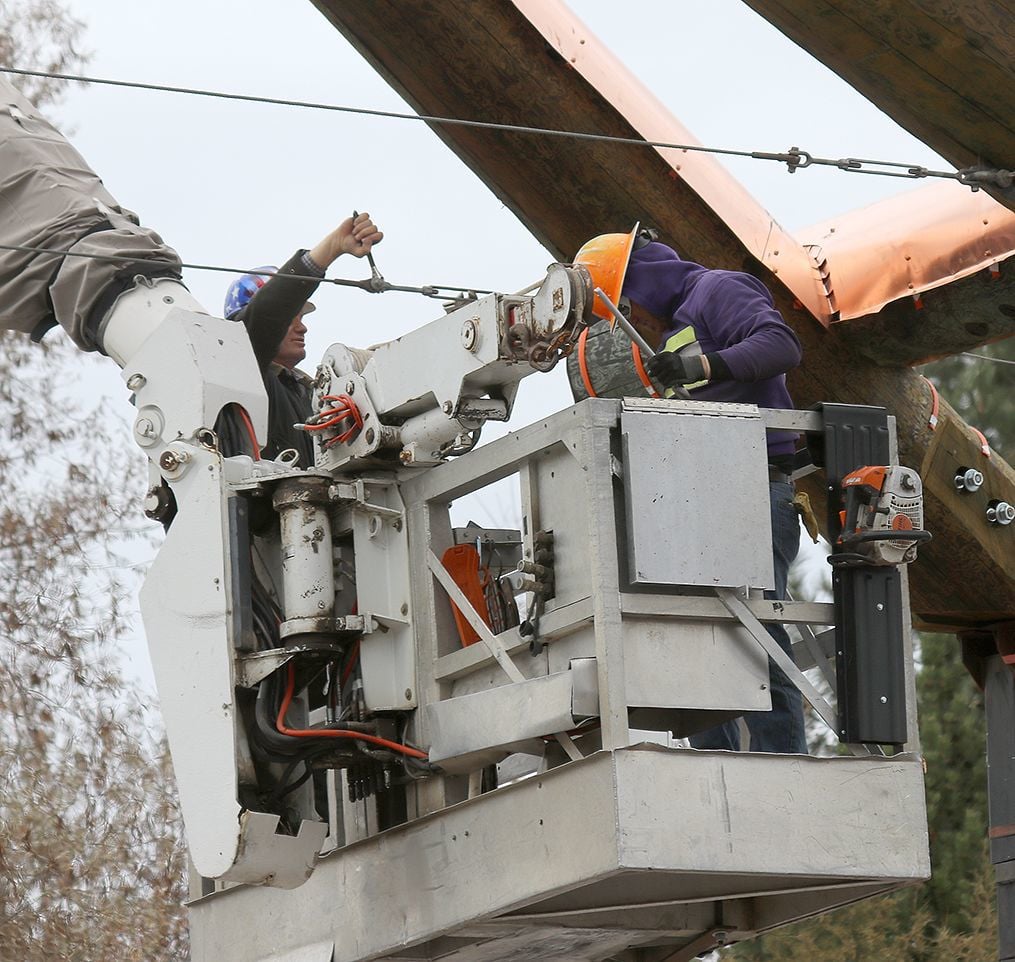 Workers tighten the stabilizing cables that link the two leaning vertical portions of the arch.

The new Ronan Arch is nearly assembled Monday morning. The newly reconstructed arch is a replacement for the original one constructed in 2002 that was a victim of the ravages of time and weather.

The coupling is nearly complete of the horizontal and leaning vertical components of the Ronan Arch.

Placing the nuts and bolts that secure two pieces of the arch is a sign that the day’s work is nearly finished.

Workers tighten the stabilizing cables that link the two leaning vertical portions of the arch.

RONAN — The original Ronan Arch erected in 2002 that spans Main Street had seen better days before the ravages of Mother Nature took its toll. The wooden arch that was rotting from the effects of water and ice was deemed unsafe and was dismantled in March. Since then funds were raised to once again hoist the Welcome to Ronan Arch. And on Monday the new Ronan Arch was erected sans signage.

The signage is presently being made by students at the Ronan High School shop class. The signage will contain the Salish and Kootenai place names for the area as well as the Welcome to Ronan sign.

“The Ronan schools had a lot of involvement in the process of the reconstruction of the arch,” said Jay Preston, one of the community members heading the replacement charge. “The original arch was a 2002 senior community project. On this one there is more involvement of the other age groups at the school.”

Besides making the signage for the arch, the students pealed the bark from the logs that were harvested by Dupuis Lumber.

Hunts Timbers treated the log components that will be “roofed” with copper that will better protect it from water damage than the prior non-copper roofed one.

“This new arch has a better preservative treatment than the original one,” Preston said. “The first one, we treated it ourselves like people who treat their decks. This one was soaked in treatment containers at Hunts. It’s also covered with copper that will help with its battle against the effects of water.”

The signage will be attached in the spring and there will be a big doings dedication then.

“As far as we know, this is the longest free-standing arch in the state,” Preston said. “It serves as a welcome mat that incorporates the Salish and Kootenai names for the place in acknowledgment of their long history here.”

Financial aid for the project came from the Montana Tourism Bureau, a Washington Foundation grant, individual donations and fundraisers.