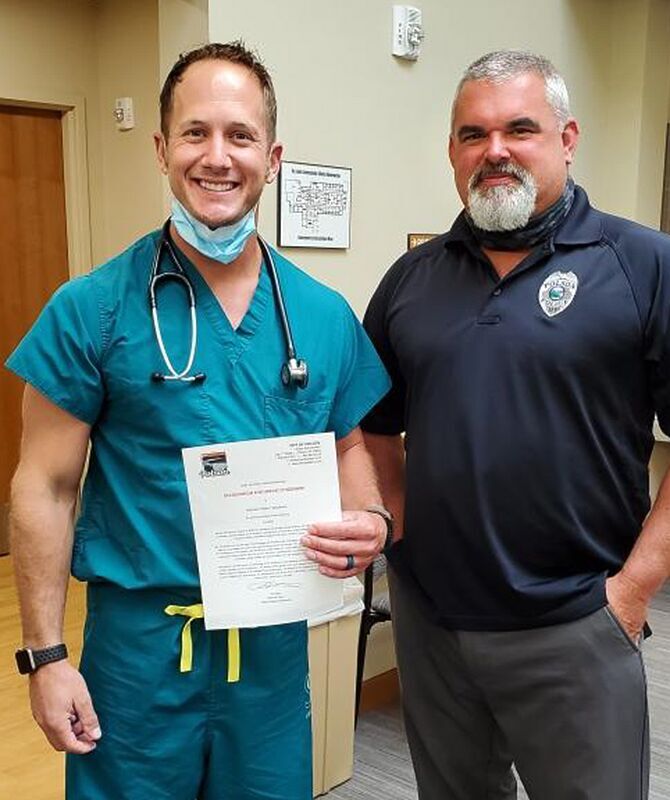 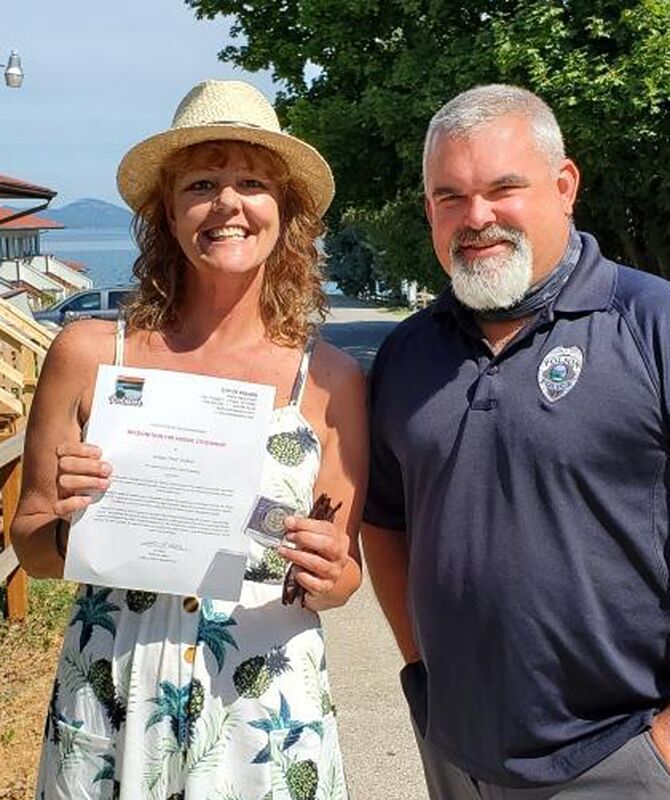 POLSON — On August 18, Chief Wade Nash visited with two citizens and thanked them for their heroic actions. Chief Nash presented them with letters of Recognition for Heroic Citizenship and Polson Police Department Coins as a small token of appreciation for their service.

“We work with our community and for our community; as we are part of the community," said Chief Wade Nash. "These recognitions are examples of just how spectacular the great people of Polson are.”

The awards read as follows:

On the afternoon of August 8, 2020, Ms. Siciliani heard sirens in her apartment complex and went outside to see what the commotion was about. She came across an officer performing CPR on an unconscious male.

Ms. Siciliani, being a retired nurse, immediately offered her assistance, and began helping the officer with CPR. Together they performed CPR for approximately eight minutes before the patient began breathing on his own and was transported to the Saint Joseph’s Emergency Room.

The patient made a full recovery and no doubt Ms. Siciliani’s lifesaving efforts were a contributing factor. Her selfless devotion to others reflected great credit upon herself and were keeping with the highest traditions of the Polson Police Department. On behalf of the citizens of Polson, thank you Ms. Siciliani for your service; it’s partnerships such as this that make Polson a safe and pleasant place to live, work, learn, and play.

On the afternoon of August 8, 2020, Mr. Schallock was driving through town on US Highway 93 and witnesses a horrific vehicle crash, in which a pickup truck and van were totaled beyond repair. Mr. Schallock, without hesitation stopped with other citizens to assist.

The patient is on the way to recovery due to Mr. Schallock’s quick thinking, professional training, and selfless devotion to this community. His actions reflect great credit upon himself and were keeping with the highest traditions of the Polson Police Department. On behalf of the citizens of Polson, thank you Mr. Schallock for your service; it’s partnerships such as this that make Polson a safe and pleasant place to live, work, learn, and play.