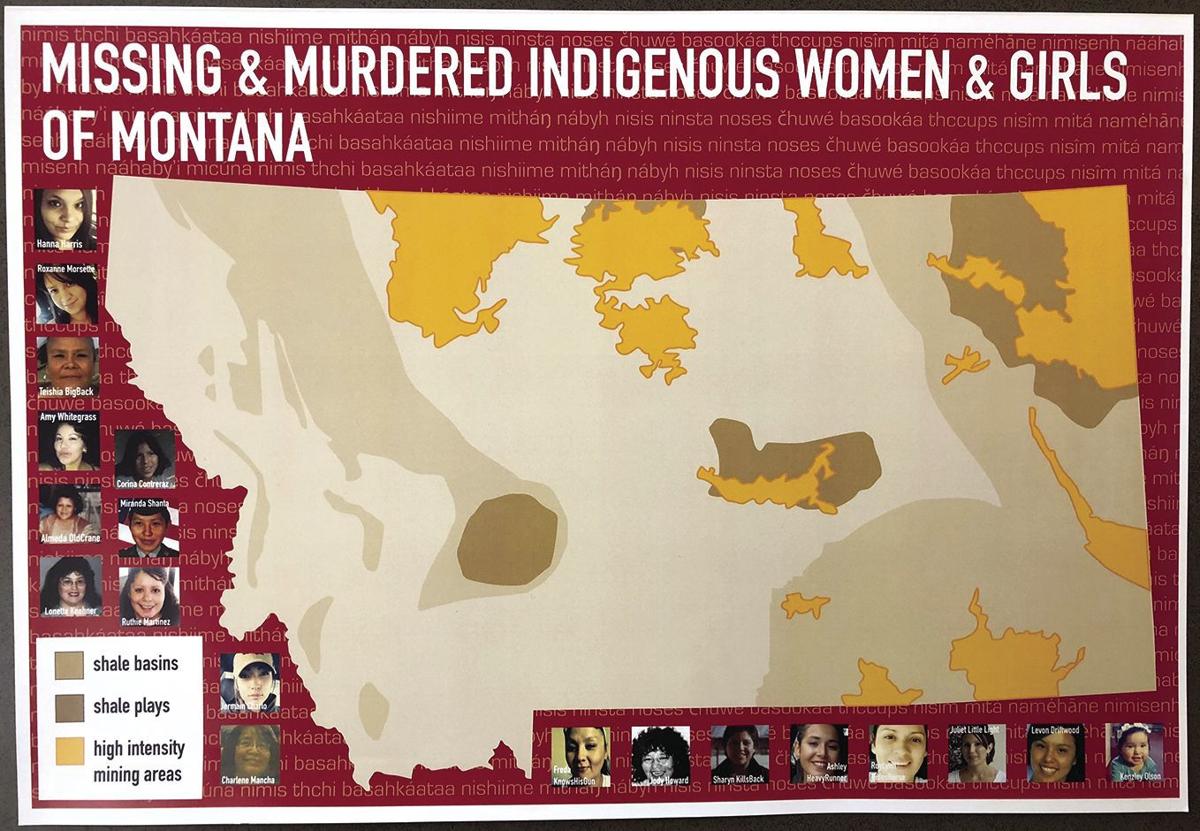 Annita Luccezzi, a Ph.D. researcher from the University of Lethbridge created a map for missing and murdered indigenous women and girls in Montana with photos of the women. The map circulated the audience during the discussion. Shaded grid areas are included showing mining areas across the state.

Ledger artist John Pepion created this piece called, “Indian girl lost in the man camp” while working with environmental and political activist, Winona LaDuke and Faith Spotted Eagle to help bring awareness of pipelines and man camps. “I created three pieces. This is one of them. I wasn’t really aware of man camps at the time. Faith Spotted Eagle started sending me cases of articles about the man camps surrounding Williston, North Dakota and the Fort Berthold Indian Reservation in North Dakota. The image is of a young trafficked Indigenous woman lost in a man camp during the oil boom of North Dakota,” said Pepion. Filmmaker Ivan McDonald used the image in his presentation. 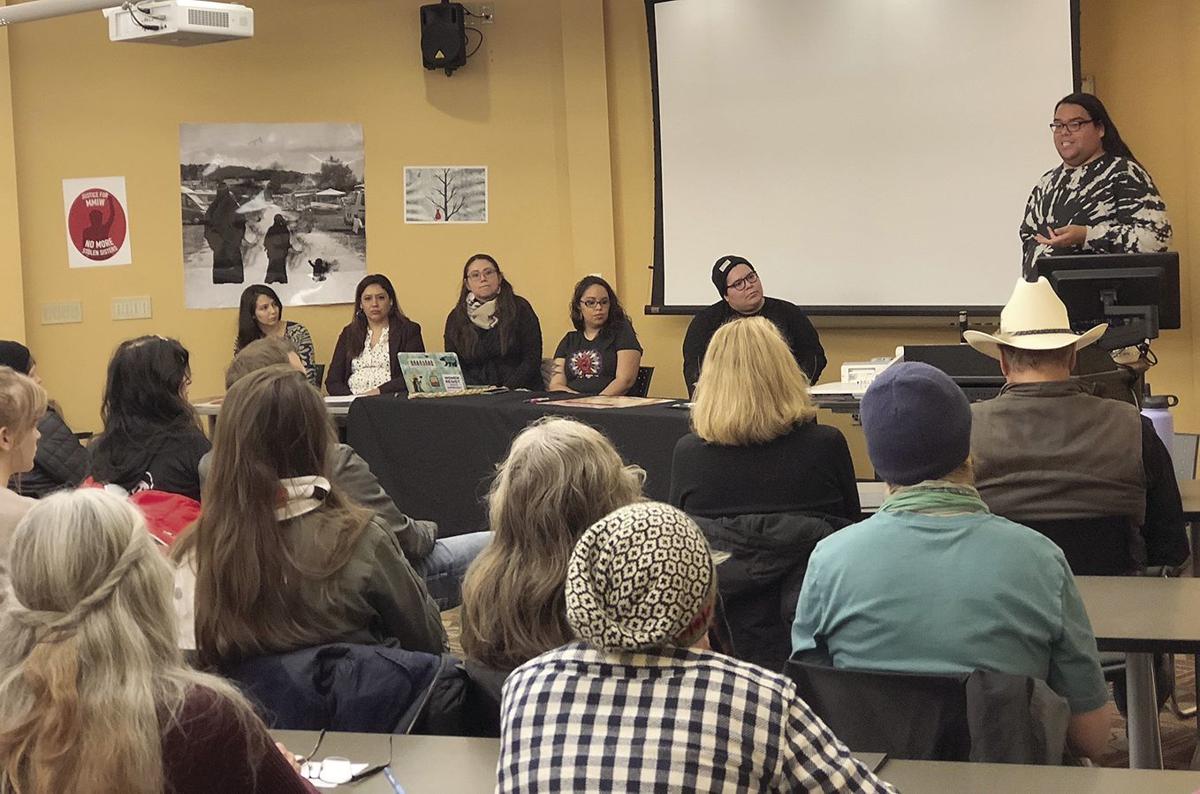 Annita Luccezzi, a Ph.D. researcher from the University of Lethbridge created a map for missing and murdered indigenous women and girls in Montana with photos of the women. The map circulated the audience during the discussion. Shaded grid areas are included showing mining areas across the state.

Ledger artist John Pepion created this piece called, “Indian girl lost in the man camp” while working with environmental and political activist, Winona LaDuke and Faith Spotted Eagle to help bring awareness of pipelines and man camps. “I created three pieces. This is one of them. I wasn’t really aware of man camps at the time. Faith Spotted Eagle started sending me cases of articles about the man camps surrounding Williston, North Dakota and the Fort Berthold Indian Reservation in North Dakota. The image is of a young trafficked Indigenous woman lost in a man camp during the oil boom of North Dakota,” said Pepion. Filmmaker Ivan McDonald used the image in his presentation.

MISSOULA — The ongoing epidemic of Missing and Murdered Indigenous Women and Girls have raised not only concerns on Indian reservations and urban Indian communities, but in communities across the state and country.

The Montana Conservation Voters partnered with the Missoula Urban Indian Health Center and the University of Montana Indigenous Filmmakers Club to host a night of conversation and community action concerning MMIWG. A panel of native filmmakers and longtime MMIW activists presented data, experiences, and stories, while members of the audience generated a discussion at the end. The intended focus of topic surrounded the possible ties between petroleum development and crimes against Native women that could lead to the MMIW rising crisis.

The discussion hosted a packed wall-to-wall standing room only at the UM Native American Payne Center a week before the Oversight Hearing on Missing and Murdered Indigenous Women: “Confronting the Silence in Indian Country” in Washington D.C. before the Senate Committee on Indian Affairs on Wednesday, December 12.

From an NBC Montana article dated November 18, 2018, “Calls to end violence against Indigenous women get louder,” the FBI sent NBC Montana a one-page statement that breaks down their effort.

The FBI is responsible for investigating the most serious crimes in Indian Country, including murder, child sexual and physical abuse, violent assaults, drug and human trafficking, public corruption, and financial crimes. The FBI has investigative responsibility for federal crimes committed on approximately 200 Indian reservations nationwide. Federal jurisdiction is shared concurrently with the Bureau of Indian Affairs, Office of Justice Services.

In order for the FBI to obtain federal criminal jurisdiction, three things must be satisfied: predication of a criminal act for which the FBI has jurisdiction; commission on a reservation where FBI has jurisdiction; and the subject, victim or both must be American Indian or Alaska Native. The FBI investigates all matters that meet these criteria without regard to age, race, gender or other personal demographics.

The number of missing Native American females entered into the National Crime Information Center (NCIC) during calendar year 2016 was officially 5,711. For comparison, in calendar year 2017, there were 5,646 missing Native American females entered, and so far for the 2018 year, up to June 30, 2018, there have been 2,758 missing Native American females entered for calendar year 2018. The NCIC does not maintain statistics on individuals reported as “murdered.” As a reminder, the entry of records into the NCIC is voluntary, with the exception of federal warrants and missing juveniles. In accordance with Title 42, United States Code, Section 5779(a) (Suzanne’s Law), a record for a missing person under the age of 21 must be entered into NCIC within 2 hours of receipt of the minimum data required to enter an NCIC record.

Filmmaker brother and sister team, Ivan and Ivy MacDonald, (Blackfeet), screened clips of their film documentary “When They Were Here,” of stories collected across the state from families of missing and murdered Native women. Their film features loved ones remembering the lives of women and girls in Indian Country whose lives were cut short by violence.

However, the presentation from filmmaker Ivan MacDonald centered around research he’d gathered from articles and reports he found regarding the increased violence and sex trafficking of Native women and girls near the Bakkan Oil operations of North Dakota.

MacDonald cited an article from Honor The Earth dated in April 2015, “Extreme Extraction and Sexual Violence Against Indigenous Women in the Great Plains, stating, assaults in Dickinson, North Dakota, were up 300 percent with rapes in North Dakota alone increasing by 17 percent statewide from 2011 to 2012 during the oil boom.

MacDonald added what he found disturbing is that data collected for Native populations always lags by several years.

He shared that the article reported the rise of crime was in direct correlation to the population doubling with non-Native oil workers who were brought in to work on the Bakken oil fracking operations. The Rosebud Sioux Tribal Police reported an increase of 75 percent of sexual assaults that year.

MacDonald said, “From March to May of 2014 eleven men were charged with child sex trafficking in Dickenson.”

“Tribal leaders said their police forces were underfunded and understaffed and ill-equipped to the drug operations that have infiltrated the region (Fort Berthold),” said MacDonald.

The sex trafficking and missing and murdered Native women is closely connected to the oil boom and increase in sexual assaults.

The documents from Honor The Earth article stated that two individuals were arrested for prostituting immigrants out of a massage parlor in Minot in 2014. The report included two men were charged with the attempted sex trafficking of children in the Oil Patch. Much of the sex trafficking in the Bakken oil fracking region involved both male and female minors, according to Bryan Lockerby, administrator of the state’s Department of Criminal Investigation. Lockerby stated in the report that statistics show 70 percent of female prostitutes had been brought into the sex trade via illegal human trafficking, often as young teenagers and recruited by pimps. According to the article, many Native women were forced into prostitution, or became victims of trafficking due to factors relating to intergenerational trauma and continued conditions of colonization.

Non-native oilfield workers flocked to the local reservations of the Three Affiliated Tribes and were immune from prosecution by tribal governments.

MacDonald also shared from the report, “There were 5,000 criminal cases dismissed by the Fort Berthold tribal court due to an inadequate tribal court system and the lack of tribal prosecutors.”

In an interview in 2014 with Lockerby, he said the problem in prosecuting the avalanche of criminal cases was due to lack of jurisdiction and the tribal police were not able to arrest national or international drug rings operating within the Fort Berthold boundaries. Only 10 percent of law enforcement in the Bakken region had been trained to deal with sex trafficking.

“I think that’s something that’s very, very real, and I think a lot of times we have to face as indigenous communities, since we’re in locations of oil booms or oil resource development,” said Ivan. “I don’t think there is anyone that’s indigenous that doesn’t have some sort of experience with this (MMIW) crisis,” said MacDonald.

The sibling team Ivy and Ivan MacDonald say their cousin, Monica, was kidnapped and murdered as a child on the Blackfeet reservation in the late 1970s and still rings fresh in the minds of their family today.

“A lot of our oil developments are actually ironically placed at our reservations, and a lot of the crime that you see are those who are non-native perpetrators. So this crisis that we have for MMIW shows real data from a real indigenous data analyst,” said Small Rodriguez.

According to the Montana Department of Justice, Native American women make up 30 percent of the missing persons list and yet only 3.3 percent of the state’s population.

Data collected for Native people are not always accurate said the panel. A person from an urban area or tribal descendent on or off a reservation is not always factored in making much of the data’s already staggering statistics inaccurate.

Proposed: What needs to happen next?

UM MMIW panel and participants came up with a list they would like to see happen beyond awareness. The question they proposed to the audience and panel was: What Concrete things would you like to see in the upcoming Senate Committee on Indian Affairs, “Missing and Murdered Indigenous Women” hearing beside raising awareness to the MMIW Movement?

The panel discussed the Keystone XL pipeline that was expected to begin construction as early at mid-February to transport oil from Alberta, Canada through Montana and Nebraska. Backers of Keystone say it will strengthen the U.S. energy security by creating a stable and long-term energy supply and spur economic growth through new jobs and additional tax revenue.

The panel said they oppose the Keystone saying it doesn’t only bring environmental concerns but also danger to Native people.

On Friday, December 7, Judge Brian Morris of the federal District Court of the District in Montana rejected TransCanada Corp.’s request.

The Hill reported on December 8, the rejection is a major victory for environmentalists and indigenous rights groups. Judge Morris’s overturn of President Trump’s permit for the Canada-to-Texas pipeline, which the president signed shortly after taking office last year. Morris’s ruling halted the Trump administration in reversing then-President Obama’s 2015 denial of the pipeline permit without proper explanation. Obama said the State Department “simply discarded” climate change concerns related to the project. The Trump administration had tried to argue that federal courts didn’t even have the right to review Trump’s approval, saying that it extended from his constitutional authority over border crossings. The court rejected that argument.

With the upcoming 2019 Montana legislative session a bill called Hanna’s Act is expected to do more in Indian country requiring the Department of Justice to hire a missing persons specialist. Funding of $100,000 would come from the state’s general fund.

MacDonald said everyone can get involved by doing some research.

“Educate yourself on the issue. There’s lots of great resources online,” said MacDonald. “Research the legislative bills that are coming up for the 2019 Montana legislative session and ask your senators to support them,” he said.