Art Soukkala said he couldn’t think of a better place to work than in Montana with the CSKT. From left are Terry Tanner, Dale Becker, Tom McDonald, Soukkala and Rich Janssen. 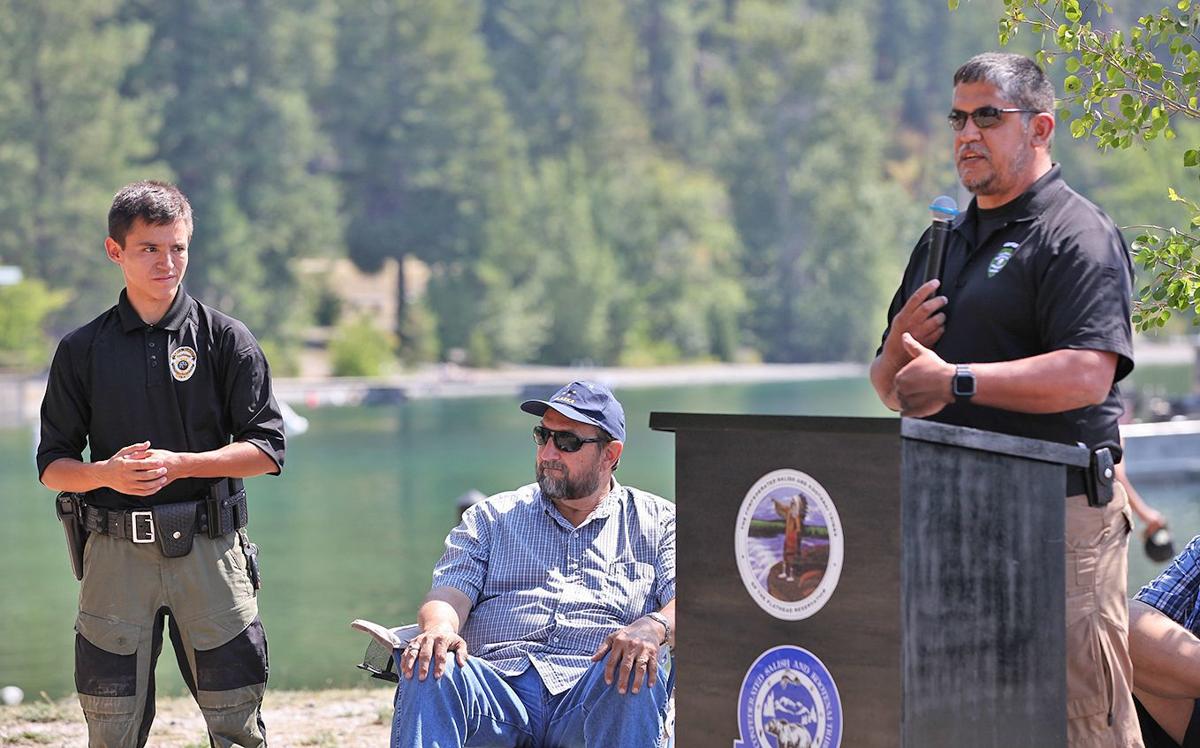 Guests from the Montana Fish, Wildlife and Parks, Environmental Protection Agency and Yellow Bay Biological Station are recognized at the NRD summer gathering. 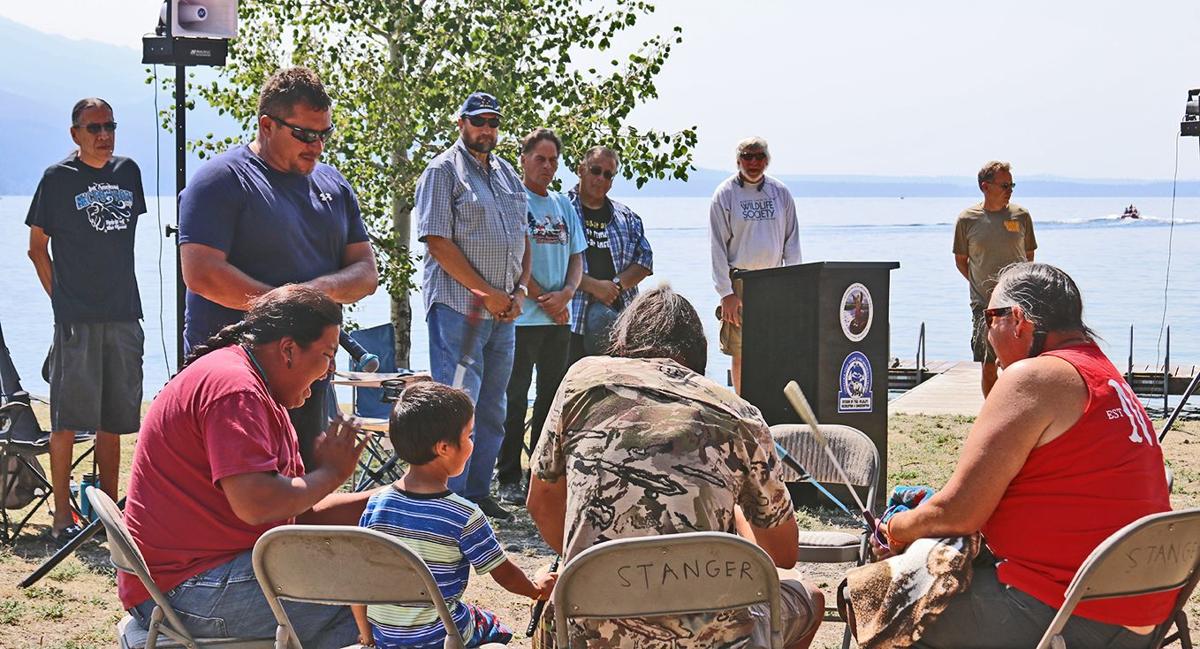 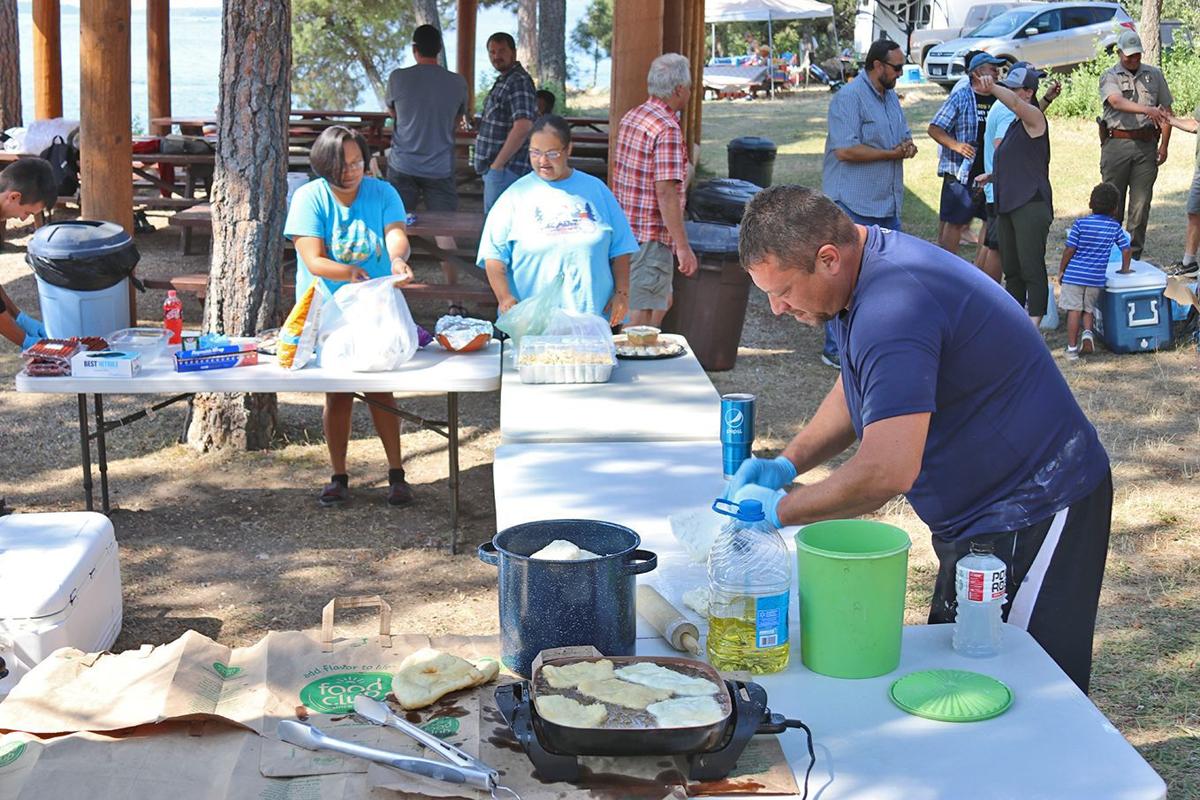 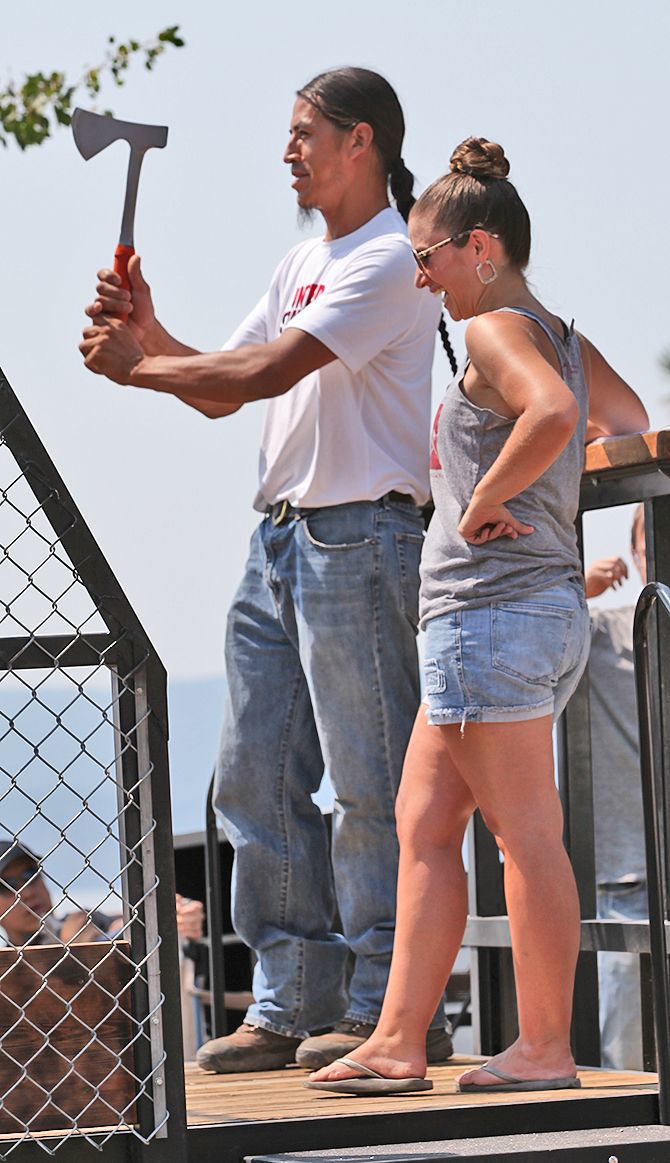 Vince Shepard gets ready to do the tomahawk chop at the NRD summer gathering at Blue Bay.

Art Soukkala said he couldn’t think of a better place to work than in Montana with the CSKT. From left are Terry Tanner, Dale Becker, Tom McDonald, Soukkala and Rich Janssen.

Guests from the Montana Fish, Wildlife and Parks, Environmental Protection Agency and Yellow Bay Biological Station are recognized at the NRD summer gathering.

Vince Shepard gets ready to do the tomahawk chop at the NRD summer gathering at Blue Bay.

BLUE BAY — Those who care for those — the feathered, the furry, the gilled, the slippery — who can’t speak for themselves took time off Wednesday to reflect, break bread, introduce new employees and recognize their long in the tooth peers at the semi-annual Natural Resources Department all-staff meeting with guests on the banks of the shimmering jewel of water called Flathead Lake last Wednesday. The NRD staffers welcomed guests from the Environmental Protection Agency, the Yellow Bay Biological Station and the Montana Department of Fish, Wildlife and Parks.

Long time NRD employees Terry Tanner, Art Soukkala and Les Evarts, with a combined record of service of more than 100 years, were honored for their positive and professional contributions to the mission of the NRD and the Confederated Salish and Kootenai Tribes.

Also recognized was the newest NRD employee, Paden Alexander, a recent University of Montana graduate with a wildlife biology degree who graduated from the Montana Law Enforcement Academy on July 12. He is now a rookie NRD Fish and Game warden. Paden was also an outstanding long-distance runner for the UM Grizzlies cross-country team. NRD Fish and Game Chief Dan McClure introduced and welcomed Alexander aboard publicly, calling him a welcome addition.

Dale Becker, NRD Wildlife Division director, introduced and lauded Art Soukkala calling him a part of the “Old Cadre” of NRD employees who came to work for the Confederated Salish and Kootenai Tribes in the late 1980s.

“He has done a lot of good work for the Tribes with habitat restoration,” Becker said. During the 1980s the CSKT began the quest to exert its right to have a definitive say in the management of the water on the Flathead Indian Reservation, and to officially seek the management of Kerr Dam with the goal to eventually purchase it.

Also during that time period legal efforts began for the CSKT to be included in the ARCO settlement related to the environmental damage the copper mining in Butte and the smelting of it in Anaconda. The Tribes through the 1855 Treaty of Hell Gate maintained that they too, not just the state, should be compensated for the environmental damage done to the waterways. The damage was after all in the aboriginal territory of the Flathead Nation where they maintained the time immemorial rights to hunt, fish and gather in the treaty. They became part of the suit, the suit was successful and the CSKT received, among other things, funds to address the environmental damage via mitigation efforts.

Soukkala has been a part of that effort since with his focus on habitat restoration. Through his efforts much land on the Flathead Reservation has been purchased and restored to its natural state.

“He is familiar with all corners of the reservation,” said Wildland Recreation Program manager Les Bigcrane of Terry Tanner, head of the NRD construction/destruction crew. Tanner has nearly 40 years with the CSKT including NRD since the late 1990s. “Terry has been leading the construction charge since the 1990s. He is great at getting people together to do the job at hand. We call him ‘Got it done, Tanner.’ When Tom (McDonald) asks him to do something, Terry usually says, “Got it done.”

Tanner lauded his mother Rose for his and his siblings’ work ethic, and his “wonderful” crew. “We all pitch in and get the job done,” Tanner said. “I delegate duties and have the faith that they’ll do the job right.”

Both Bigcrane and McDonald praised Tanner for his work as a cultural ambassador for the CSKT locally, regionally, nationally and internationally. “I’ve been around,” he said of his worldly travels related to cultural exchanged and tribal language salvation.

Tom McDonald, director of the Fish, Wildlife, Recreation and Conservation Division, called Fisheries Program manager Les Evarts, who began working for the CSKT in 1989, a math and statistics wizard.

Evarts refracted the praise to others.

“We’ve come a long way thanks to the Tribal Council and Legal,” Evarts said. And the good work of the Natural Resources Department.”