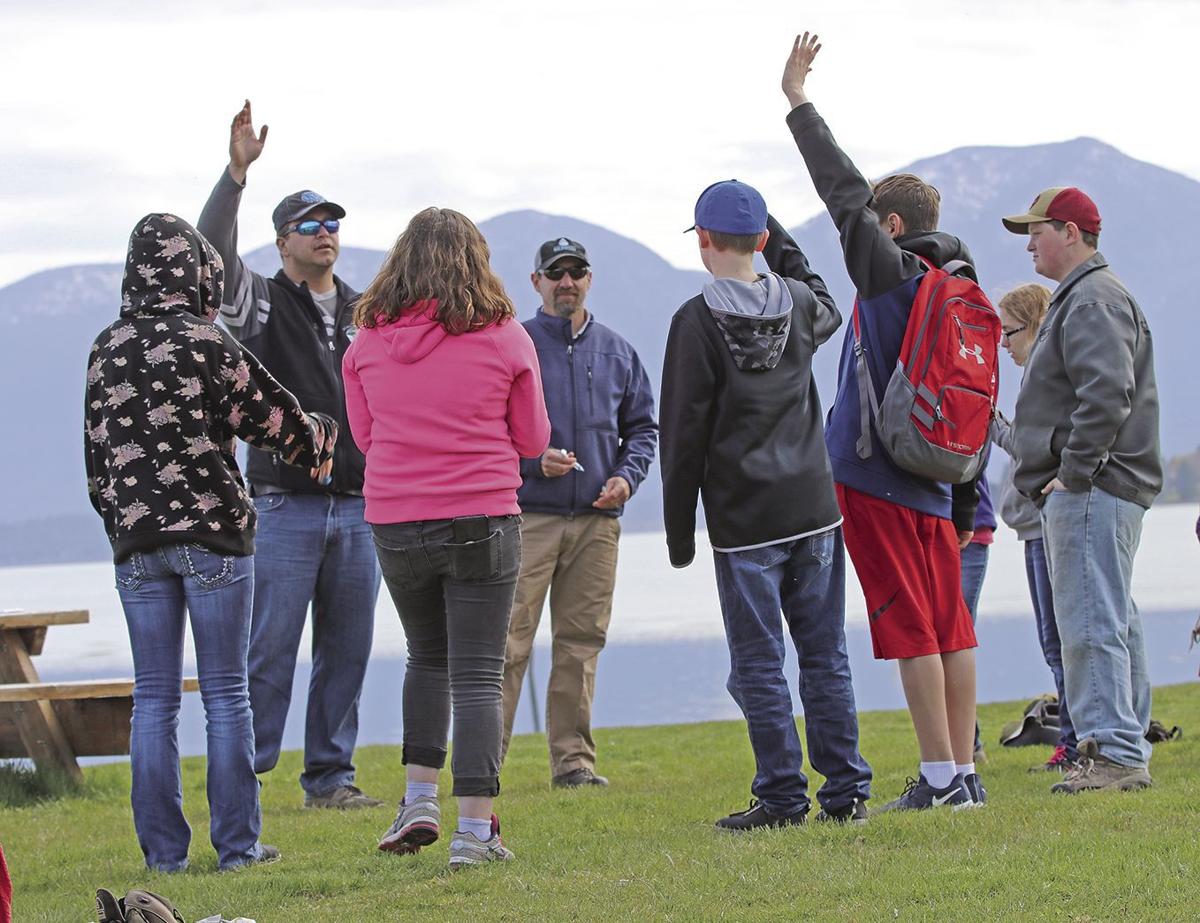 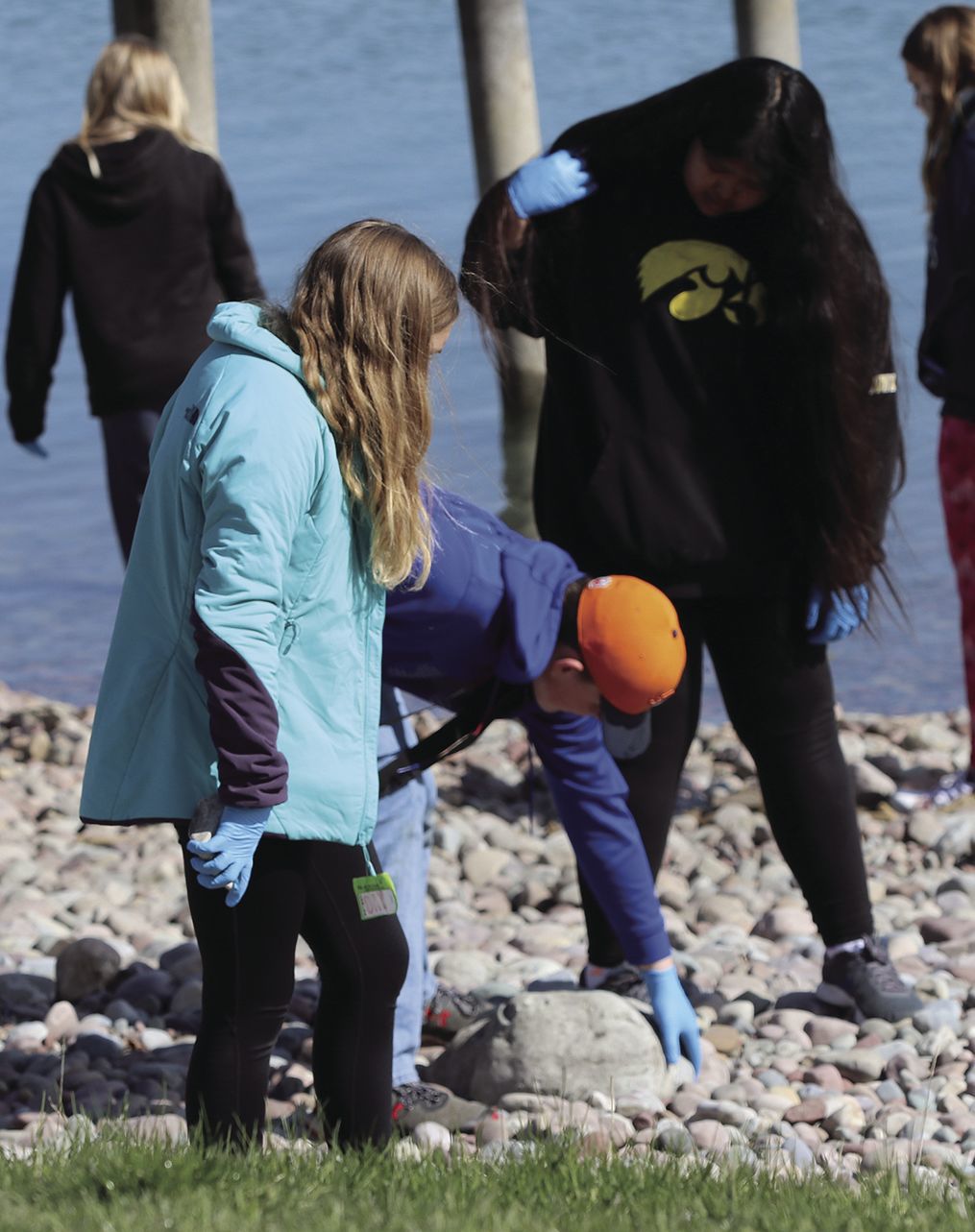 It was time to walk the talk following the various Mussel Walk presentations. The students searched the Polson Bay beach for signs of invasive mussels. 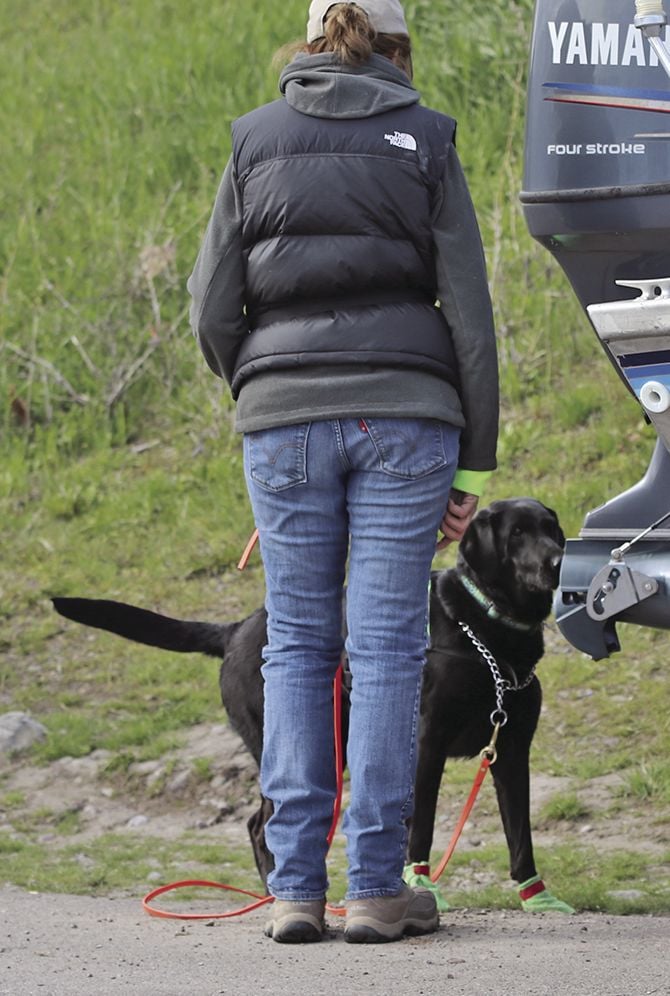 Dogs are a great ally in the search for invasive mussels on watercraft. 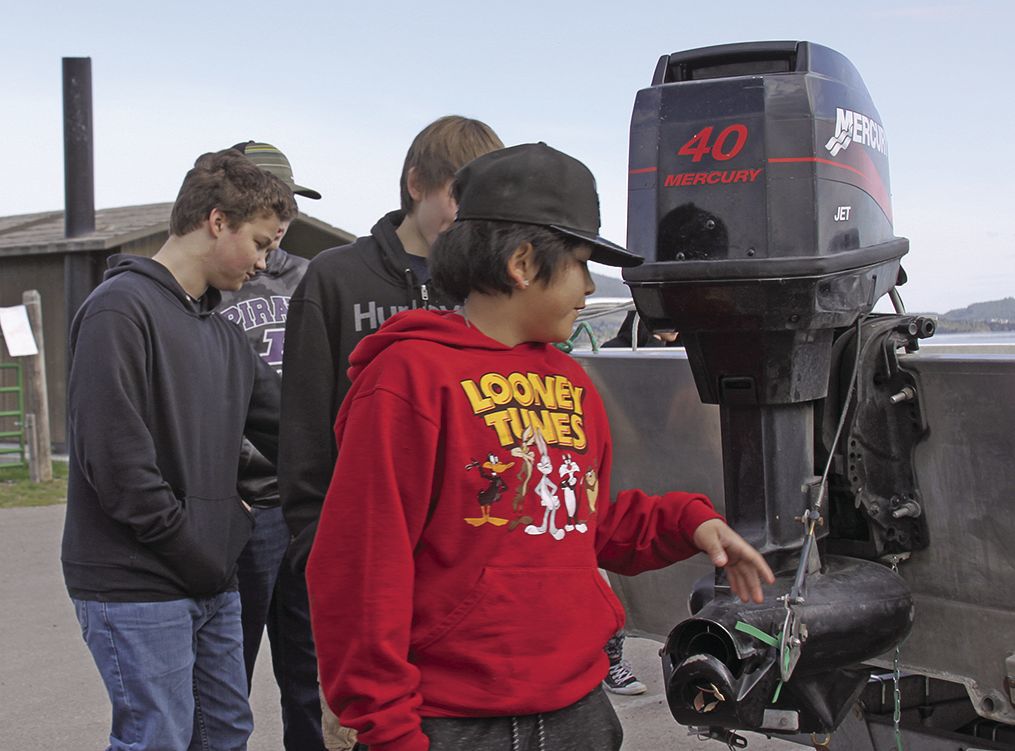 These Polson 7th graders give it the good ole Sherlock Holmes eyeball inspection in search for invasive mussels. 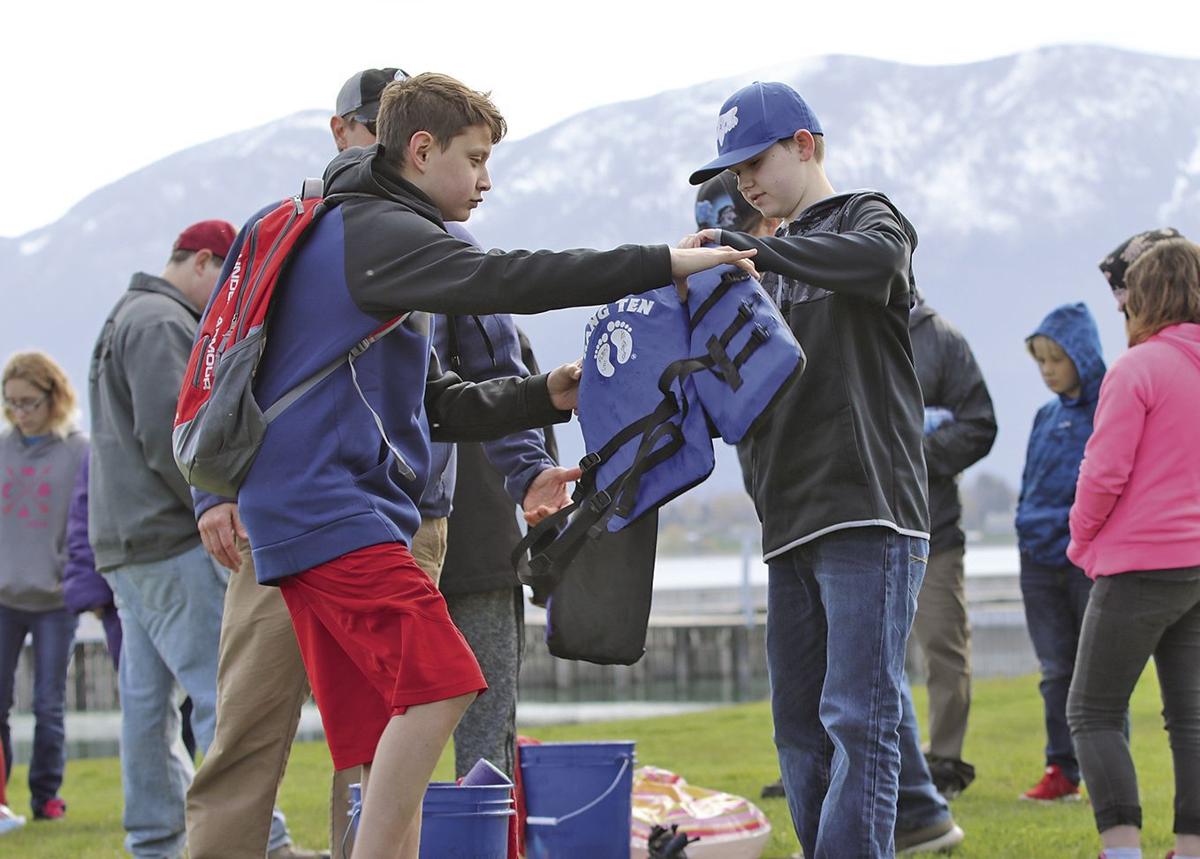 All things that come in contact with water while lake boating are prime suspects for transferring invasive quagga and zebra mussels, including life jackets. 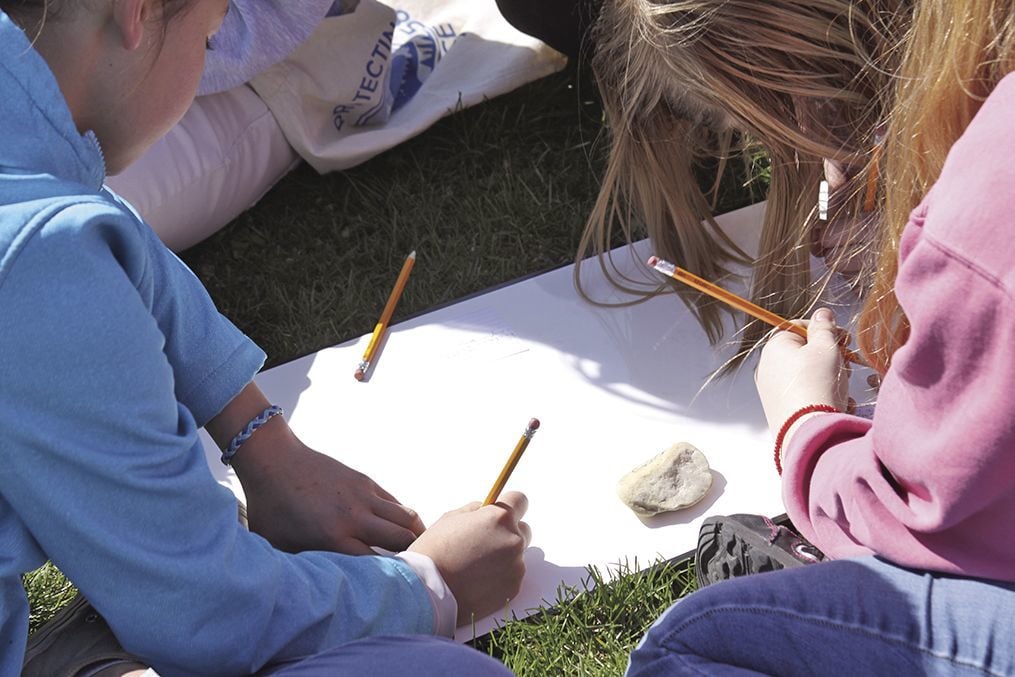 Students answer questions related to the various types of mussels and what an invasive mussel.

It was time to walk the talk following the various Mussel Walk presentations. The students searched the Polson Bay beach for signs of invasive mussels.

Dogs are a great ally in the search for invasive mussels on watercraft.

These Polson 7th graders give it the good ole Sherlock Holmes eyeball inspection in search for invasive mussels.

All things that come in contact with water while lake boating are prime suspects for transferring invasive quagga and zebra mussels, including life jackets.

Students answer questions related to the various types of mussels and what an invasive mussel.

POLSON BAY — This year’s Mussel Walk was expanded to more venues around Flathead Lake, including Polson, the Flathead Lake Biological Station, Bigfork and Whitefish. It is a wider audience overall but smaller audiences in each location that allows for more interactive teaching about the apocalyptic future if quagga and zebra mussels infest the Flathead River Basin and Flathead Lake. And by extension the Columbia River Basin, the last river basin in America sans infestation of the quagga and zebra mussels. Polson 7th grade students were the target audience at the Polson Mussel Walk.

“You don’t want to be the guy who introduces the invasive mussels into Flathead Lake. There are all kinds of invasive species in Montana, we don’t need more,” Evan Smith of the Confederated Salish and Kootenai Tribes Natural Resources Department told the youngsters at his station. “The best way you can prevent that is to clean, drain and dry your watercraft and other things that were in the water.”

“You can do your part by knowing how to take care of your watercraft,” Matson said. “By doing that you won’t have to spend a long time at the watercraft inspection stations.”

Watercraft inspections stations are now a permanent part of the Montana landscape now that the Montana Legislature has voted to permanently fund the effort to the tune of nearly $7 million a year. The watercraft inspections stations are a very important part of the fending off of the invasive mussels but there are also public educational efforts and waterway and water-body monitoring and research.

“Once mussels infest Flathead Lake you won’t be able to swim because of the mussels on the beach,” Smith said. “You are the next wave of leaders and educators. The future of the lake is in your hands.”

“It’s hard to teach adults who are inundated with their responsibilities of every day life, jobs, raising families,” Whithrow said. “However they will take time to listen to their kids. The kids are an important part of the foundation of the effort to prevent the infestation. That is one of the reasons we expanded the Mussel Walks all around Flathead Lake and at Whitefish Lake. They learn about their responsibilities. They are excited about their roles in this effort.”

“These young kids are curious and like sponges, they soak this up with enthusiasm,” Matson said. “The time we spend educating them is worthwhile. They are future boat owners and there is now an added responsibility to that ownership. They are very impressionable and prevention mussel infestation as part of their responsibility will be a part of their culture. This is a paying-it-forward effort.”

The Flathead Nation has been the phalanx of the effort to prevent the quagga and zebra mussel infestation.

Tribal member Sierra Mahseelah, NRD AIS specialist, said she is very proud to be a part of the frontline defense of the monumental effort to keep invasive mussels at bay instead of in the bays of Flathead Lake.

“What is going on here is very important for the ecology of the lake, and for me to be involved in this,” the 26-year-old mother and student at Salish Kootenai College said. “I was once a kid learning about the world around me, now I am a part of educating young kids about a piece of their slice of the world, Flathead Lake. It means so much to me to be a part of this.”

Mahseelah said it is very important for people of all ages and stripes to be an active part of the prevention of invasive mussels infestation.

Smith added that the focus on a certain age group and spreading the word further was a paradigm shift. Seeds planted now will germinate immediately and fully blossom in the future.

“It’s nice to have present and future generations aware of their responsibilities of environmental protection,” Smith said. “These types of education work.”

“The threat out there now will be there forever,” Vobel said. “So what we are doing now will help keep the future generations on guard about the threats to a healthy environment and their responsibility to maintain its health.”

Invest now pays off in the future. Those yet to come will benefit.

The Confederated Salish and Kootenai Tribes, as owner of the southern half of Flathead Lake, have a huge stake in keeping the Flathead River Basin mussel free.