The Montana Supreme Court’s Wednesday decision affirmed the Thirteenth Judicial District preliminary injunction of the challenged laws through until a final decision on the merits is issued. As a result, House Bill 176 and Senate Bill 169 will remain enjoined until the district court issues a new decision. In August, the parties litigated a two-week bench trial, presenting more than two dozen witnesses and hundreds of pages of evidence about the impact of the challenged laws. If the final ruling permanently enjoins the laws, the November general election will operate under the election laws that governed Montana before the 2021 legislative session.

The Court found that Plaintiffs had shown, as an initial matter, that the laws unconstitutionally burden Montanans’ fundamental right to vote, which “is perhaps the most foundational of our Article II rights and stands, undeniably, as the pillar of our participatory democracy.”

Citing testimony “that illuminated the extent of the asserted injury to the fundamental right to vote,” the Court deferred to the trial court’s findings that young people would face “additional hoops” that “‘will raise the cost of voting’ in a way that is ‘unique to young voters given their mobility and the fact that they are less likely to possess the primary forms of ID and the forms that must be presented in addition to the student ID.’” The Court noted the Secretary failed to present evidence of voter fraud generally in Montana and could not show the laws in question supported the interest in ensuring voter confidence in the electoral process.

“Ultimately, the District Court found that SB 169 targets one class of voters, young people, and students from out-of-state in particular. The Secretary failed to present sufficient evidence to rebut Appellees’ prima facie case that SB 169 would disproportionately impact and violate their right to vote.”

Similarly, the Court wrote, “HB 176’s elimination of EDR undeniably narrowed the late registration period previously available to—and well-used by—Montana voters since 2005.” The district court’s finding that the law unconstitutionally “burdens the fundamental right to vote by eliminating a widely used and relied on voting option” was not clear error.

“This is a victory for Montana voters and especially for students and young Montanans more broadly,” said Hunter Losing, Executive Director of MontPIRG. “Young people use Election Day Registration at twice the rate of older Montanans. We will be working hard for great turnout in November.”

“Democracy has won today. We are proud to be fighting for an election system that facilitates voting, rather than burdening it,” said Kiersten Iwai, Executive Director at Forward Montana Foundation.

“Young people are the voice of the future. Voting is our megaphone. We could not be happier with the Court’s decision today,” said Isaac Nehring, Founder of Montana Youth Action.

The Secretary did not appeal the injunctions of House Bill 530, which banned paid ballot collection, and House Bill 506, which prevented newly-18-year-old voters from accessing ballots. As a result, both laws have been enjoined since April. In July, House Bill 506 was permanently enjoined when the trial court ruled that it “arbitrarily subjects a subgroup of the electorate to different requirements and irrationally forecloses an avenue of voting available to all others in the electorate.” The Secretary of State has not yet appealed that decision.

A copy of the Montana Supreme Court’s decision is attached with a copy of this release. 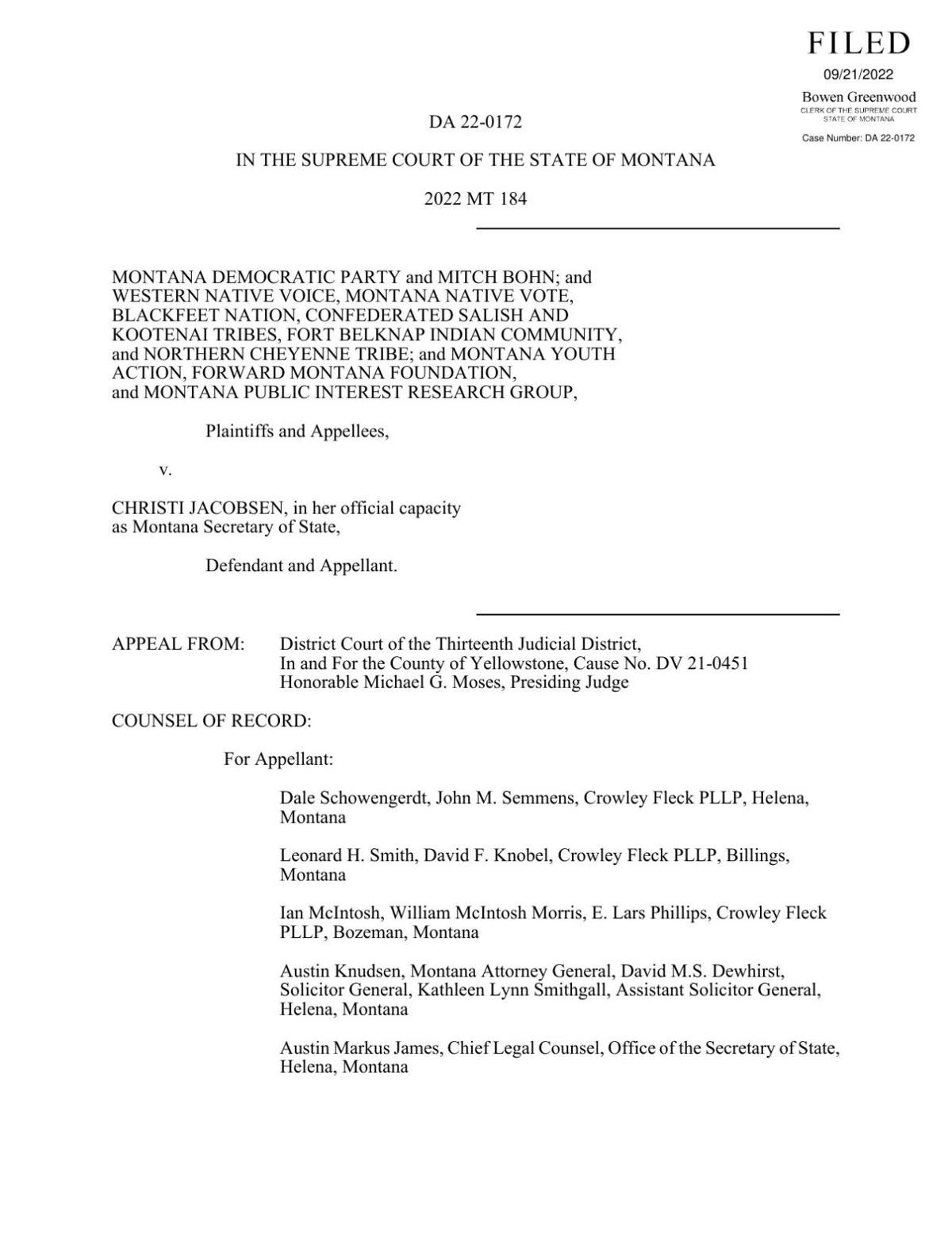 Forward Montana Foundation educates, engages, and organizes young Montanans to shape their democracy to improve their lives and the lives of their fellow Montanans.

The Montana Public Interest Research Group (MontPIRG) is a student directed and funded nonpartisan organization dedicated to effective, tangible, positive change through education and empowering the next generation of civic leaders.