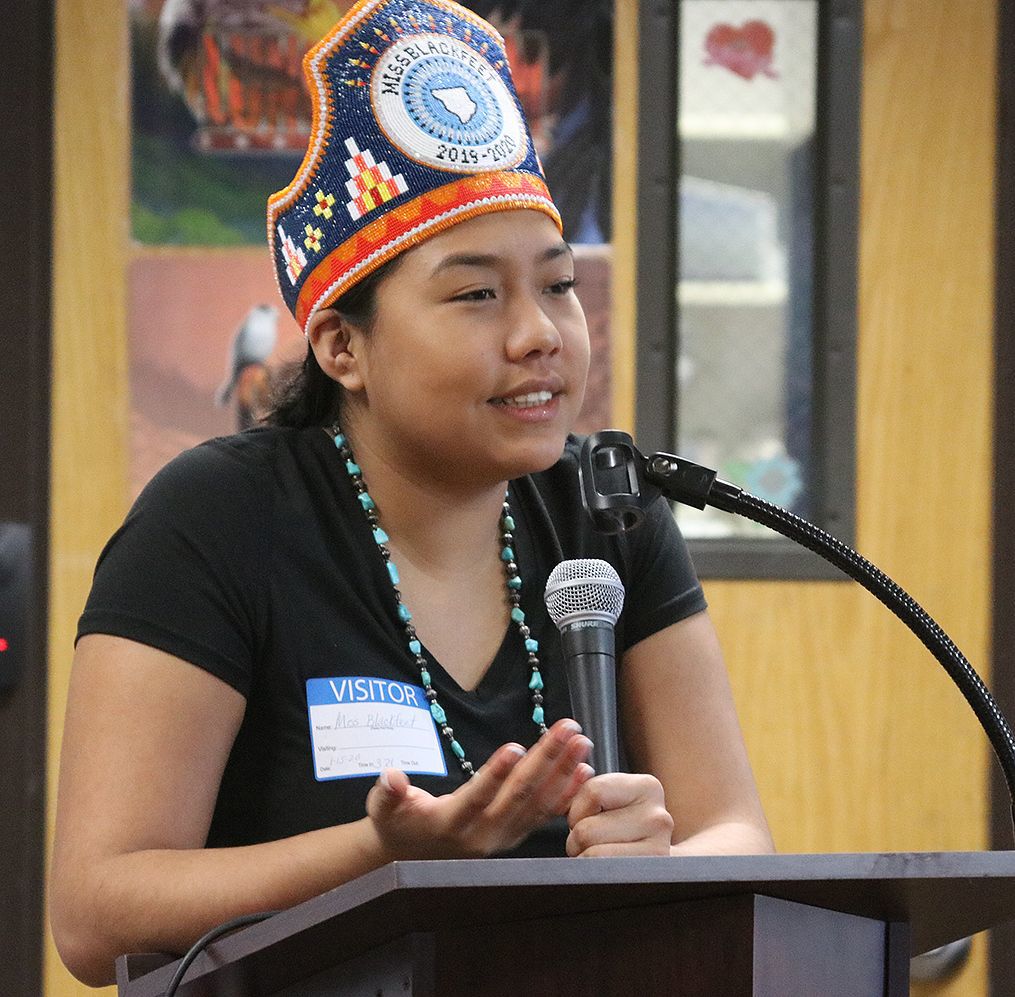 Miss Blackfeet, 19-year-old Alia Heavy Runner addresses the TERS student body imploring them to not be swayed by the temptation of alcohol and drugs as it only leads to nowhere. 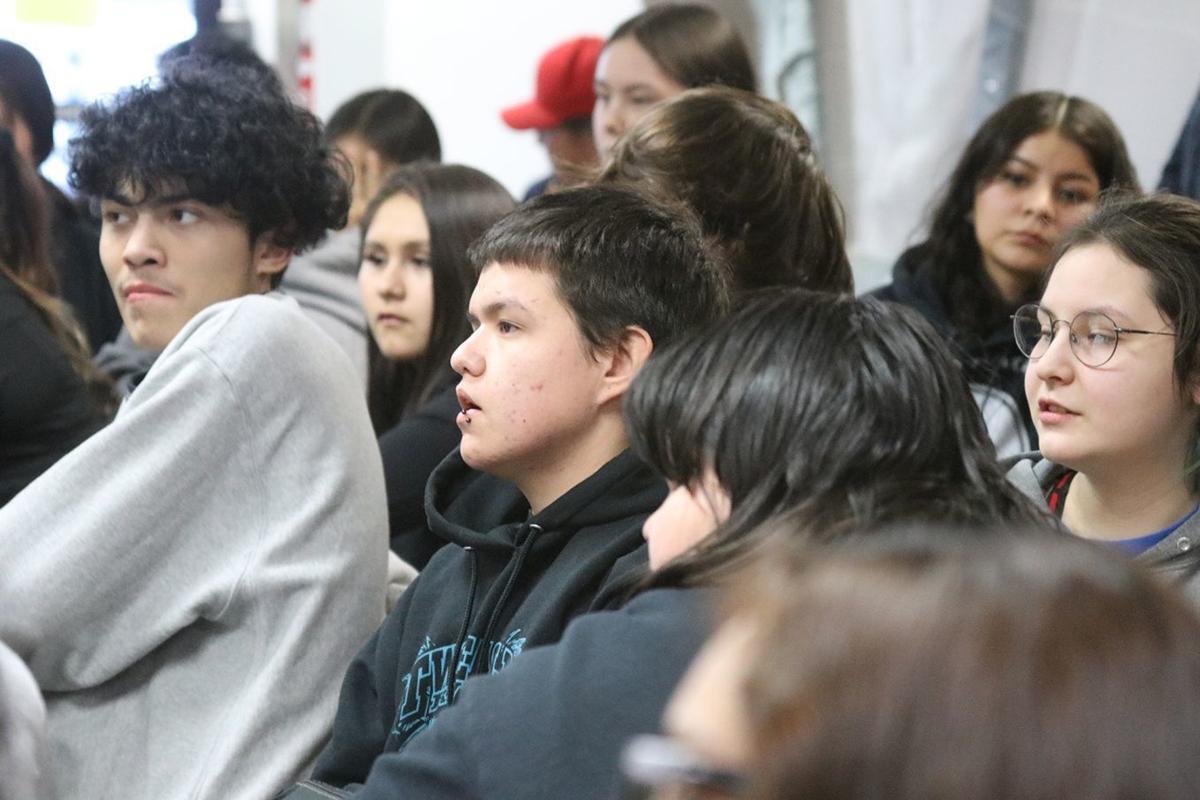 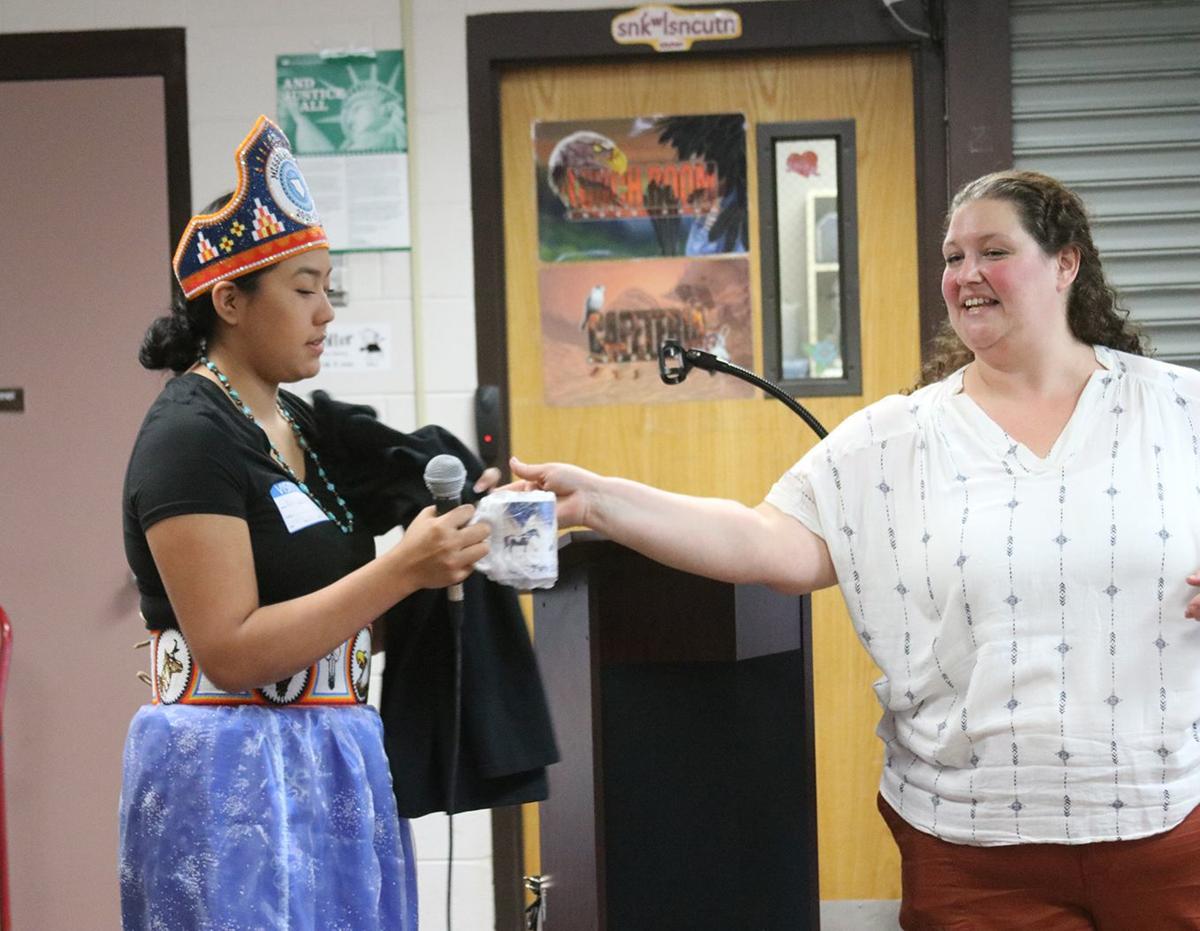 Alia Heavy Runner is presented with gifts in appreciation for her presentation to the TERS student body by TERS math teacher Shawdee Dillon.

PABLO — Walk the Spirit Road. In the case of Miss Blackfeet Alia Heavy Runner, it’s Walk the Buffalo Spirit Road. The 19-year-old member of the Blackfeet Nation cruised the chilly road from Browning to the warm climes of Pablo last Wednesday to spread the word at Two Eagle River School about the importance of tribal traditional cultures when it comes to abstinence of alcohol and drugs — the modern times small pox blankets that devastates the soul and body of afflicted people. Just like smallpox there are deaths and destitution of the soul but there is also survival — spiritual, physical, soulful survival.

Heavy Runner, a 2019 graduate of Heart Butte High School and presently a nursing student at Blackfeet Community College, said she has lived an alcohol- and drug-free life, and followed the traditional Piegan tribal ways throughout her young life. English was her second language prior to entering public school and she was somewhat shy. However, Alia began to somewhat cast her shyness aside by participating in cross-country running at Heart Butte High School.

That’s why, she said it was hard for her to act that role in a short film entitled “Iniskin.” The film, which she softly narrates, is about the return of the buffalo to the Blackfeet Nation and the positive effect that has on a young girl walking the wrong path, living in an alcohol- and drug-fogged netherworld. In the movie, of which the trailer was shown at TERS, the young girl is eventually guided by her uncle back to the tribal spiritual community by participating with the reintroduction ceremonies of the buffalo to the reservation and the soulful epiphany it has on her.

“The Buffalo Spirit is spiritual medicine that was brought back to the reservation by the return of the buffalo,” she said. “Today that spirit means our community is being protected and it is healing.

“There is a better path then drugs and alcohol,” Alia said. “It’s okay to leave the reservation to seek an education. Anyone here can be whatever they want with an education — you can be a doctor.”

Alia said being Miss Blackfeet and being an ambassador of the Blackfeet Nation is out of her comfort zone however she is gaining comfort with each presentation.

“The hardest presentation I’ve done was in Washington, D.C.,” she said. “I looked out at the audience and there were four levels of people looking down on me. I was very nervous. But when I started talking that went away. My family are really strong tribal people. That strength helps me. I didn’t have notes, the words just came out. I was talking from my heart.”

Much of the heart talk, Alia says comes from her 94-year-old grandmother Molly Bull Shoe, who spoke the Piegan language as the first language and passed that on to Alia. Along with that was the time immemorial ways of the Piegan people. Alia has been a member of the Chickadee Society comprised of 7- to 14-year-old tribal people charged with leadership roles among their peers. She is now a member of the Crazy Dog Society that has similar and expanded cultural roles.

Those spiritually grounded leadership roles have helped her deal with the ups and downs of the existence in the world of the dominant society including the racism often experienced in competitive sports. She recounted the times her basketball playing brothers, with long braids, were harassed by opposing student sections and players calling them girls and derogatory names as well as players pulling on their braids including the tying bands that unraveled and took them out of competition while being re-braided and tied. “I would re-tie their braids,” she said, adding that at times the referees would make players with long braids tuck them into their uniforms.

“I would get really mad at the people calling them girls and that other stuff,” Alia said. “But I was able to cast that out and not be that way because of the way I was raised. I was raised in our traditional ways.”