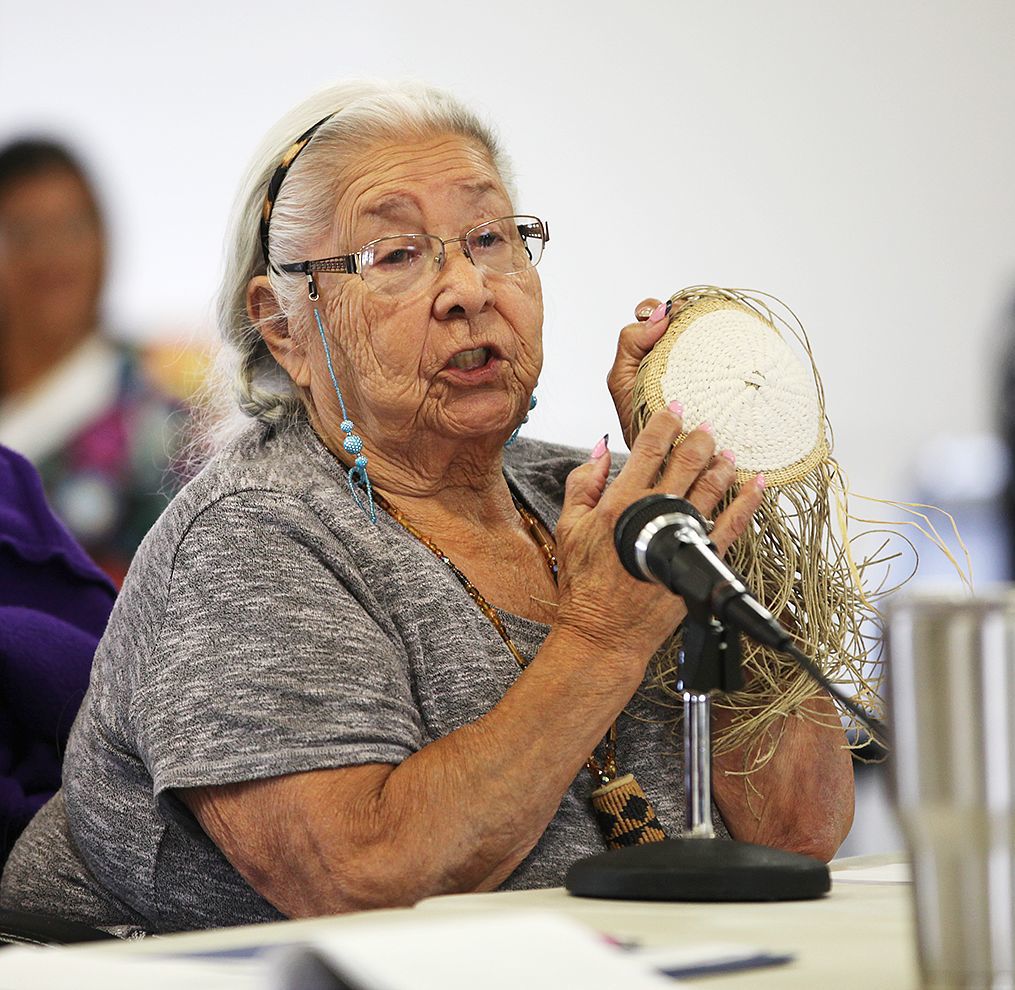 Traditional cultural artist Eva Boyd expresses the need for cultural arts to be an important part of the learning experience at SKC. 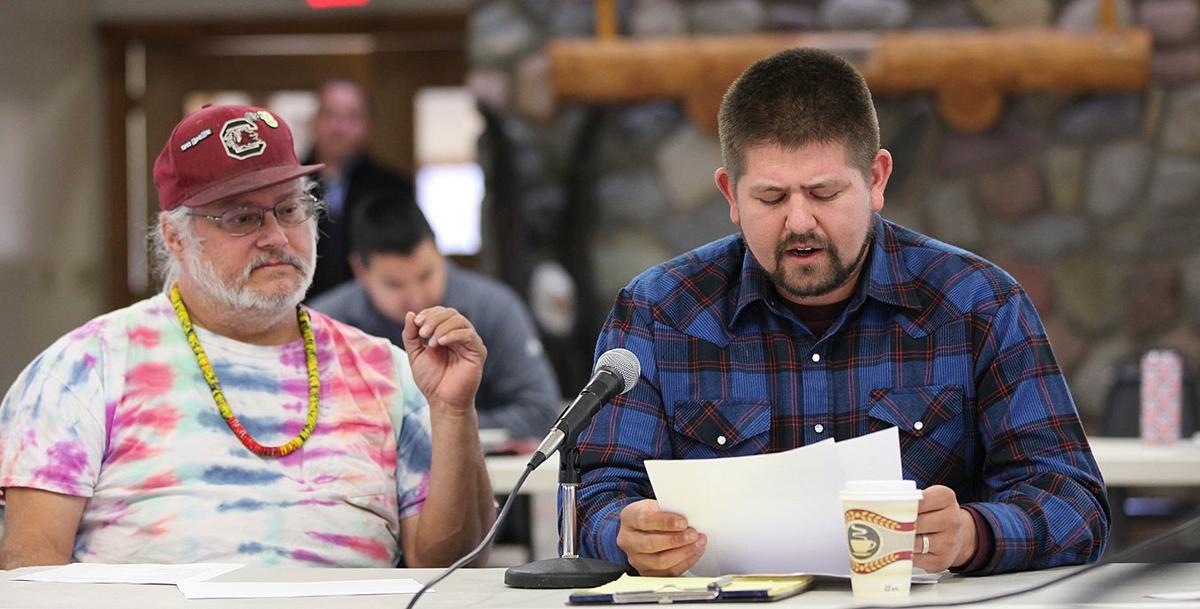 SKC Fine Arts program Director Cameron Decker talks about the importance of traditional tribal arts in his program. Artist Frank Finley is on the left.

Preservation Office’s Kevin Askan updates the Elders Committee on its ongoing and new projects. Mary Rogers is on the left Kyle Felsman on the right.

Traditional cultural artist Eva Boyd expresses the need for cultural arts to be an important part of the learning experience at SKC.

SKC Fine Arts program Director Cameron Decker talks about the importance of traditional tribal arts in his program. Artist Frank Finley is on the left.

Kevin Askan, Mary Rogers and Kyle Felsman gave an update on projects keeping the Preservation Office busy on and off the Flathead Reservation.

East reconstruction project on Highway 200. It is incorporated in the three alternatives that resulted from the MDT study of the project.

“We will be in conversation with the state in the selection of the preferred alternative,” he said. “The final design decision is forthcoming and should be made soon, probably next month.”

“There was a request from Avista to put in a new dock near Trout Creek,” Askan said. Avista is the company that owns the Noxon dam and others in the area in Montana and Idaho. “But after consultations with us they agreed to move it elsewhere and improve the present dock at Trout Creek.”

“We were ready to help and agreed to work with them,” she said about the mitigation projects Avista plans for Albany Falls Dam.

Askan said there were a lot of Salish and Pend d’Oreille cultural sites in that area including pictographs that need to be identified and protected. Some of them were submerged by the reservoir created by the dam. Those known by the public have been damaged through the years.

“We rely a lot on the interpretations and information we get from the Elders on these issues,” said Katie McDonald, Preservation Office, adding that Elders interviews have been very helpful in the location and understanding why the various cultural practice areas of the past are still relevant today and the importance of preserving them.

“I think that’s a good idea,” said Séliš-Ql̓ispéCulture Committee (SQCC) Director Tony Incashola. “We know where these cultural sites are. It is important to know that so they can be preserved and not desecrated. When my family camped the first thing that went up were sweat lodges. We as a people destroyed a lot of Jump Dance and Medicine Dance places by tribal logging in those areas. We (Incasholas) had three different Medicine Lodges; you can still see the foundations there. Things like that need to be preserved with an understanding of why. The Elders share that type of information today not for now but with the hopes that it will be shared for future generations. We have to maintain these sites for them. If they don’t get the correct first-hand knowledge they create their own.”

Incashola said modern powwows are an example. “It used to be they were different with each tribe. They each had their ways of celebrating now they are all the same,” he said.

Felsman said he felt Preservation was doing a good job of its mandate as an important arm of cultural preservation on and off the Flathead Reservation.

“We are working with the other tribes on the Albany Falls project,” he said. “We are getting to the point where other Tribes there look to us for assistance.”

Felsman said Preservation is currently working with the administration of the National Bison Range on the design of the new visitors center. “The new management there is very open to our input,” he said. “This a good opportunity for our Tribes to be involved in."

Speaking of the NBR, manager Amy Coffman, biologist Amy Lisk and graduate student Annie Sorrel were present to inform the Elders Committee on the proposed new visitors center and other issues at the bison range. She said the recent completed 15-year management plan would guide the operation there and offer good opportunities to navigate the future of the range. The plan is a 60-40 compromise that focuses 60 percent of management on the flora and fauna, and 40 percent on visitor amenities.

The present opportunity is the building of a new visitor center. The Denver Regional Office recently sent a floor plan design that resembles the footprint of an expanded FIMA trailer with a pair of knock-outs on each side of one end.

Coffman said the design is lacking and doesn’t fit the natural and cultural ambiance of the area. It is also smaller than the present one that has outlived its design life and showing signs of the wear and tear of its 38 years of operation. (See related story).

Coffman said there are plans to update NBR signage that includes cultural relevant information and history of the area. To that end there would be an all purpose room for various presentations.

Lisk said the management would include tribal ecological knowledge incorporated in habitat management.

Incashola said that there is potential to do an honoring gathering like those for the Flathead Lake and Flathead River honorings.

She said the recent bison roundup went well, and some of the bison culled were sent to the Wind River Reservation in Wyoming and the Blackfeet Nation.

Decker said he his working to figure out how to incorporate cultural arts in other classes at SKC. Currently cultural arts are elective classes, and some have been eliminated as well as other non-art classes due to budgetary cuts. The remaining art classes have to have a certain number of students enrolled before they can be taught. Consequently with fewer arts class offerings and other reduced class offerings fewer students are enrolling in the remaining arts classes.

Boyd said she now only teaches one class but used to teach more prior to the various class and budgetary cuts. Presently she has to have at least six students in her traditional basket weaving class. She didn’t have that many this fall as a result she won’t be teaching students. Besides that she said students shy from the classes because of the time involved and the “hard work” required in them.

“We should perpetuate the cultural arts so students can get a good foundation in tribal traditions. It is a great accompaniment to the other degree programs,” Decker said. “There are not a lot of colleges that offer classes like this. But the problem is the classes are not required in other programs.”

Some of those in attendance at the Elders Committee meeting expressed support of the traditional tribal arts at SKC.

Salish Language Adult Apprentice Program Director Chaney Bell agreed the classes should be required since traditional arts and crafts are an important part of the historical foundation of tribal cultures. He said there has been a change through the years of the importance of the arts in the education and that is a problem. Making them required at SKC would help change that mindset. “There is potential to develop the (degree) programs there that incorporate the arts,” he said.

“We are a holistic teaching culture that includes arts in our traditions,” said Elders Committee member Mary Jane Charlo. “Arts are expressions of the spirit. Art is one of the best ways to transfer traditional knowledge.”

“These classes should be taught even if there is three students,” said Elders Committee member Stephan SmallSalmon, who is a Salish language teacher at Nkwusm Salish Language School, referring to the number of students that enrolled in Boyd’s classes this fall. “When Nkwusm started we only had three students. Art comes from the spirit to our hearts. We all have expressive hearts that are a part of who we are. They should be happy there are three students that want to learn that spirit.”

Decker said if the arts were changed from elective classes to required for graduation more students would mean more art classes would result. He also said the offering of duel enrollment for high school student should be considered. “This would fix the dance we have to do with our class offerings,” he said, adding that if the transformation from elective to required began now the requirement could began as early as the 2020 fall quarter. “This is a real good opportunity to learn from the traditional arts masters.”