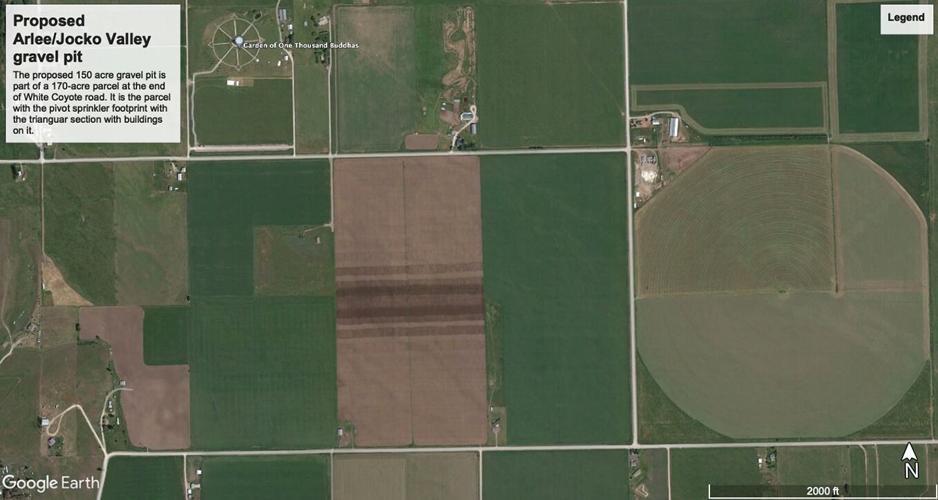 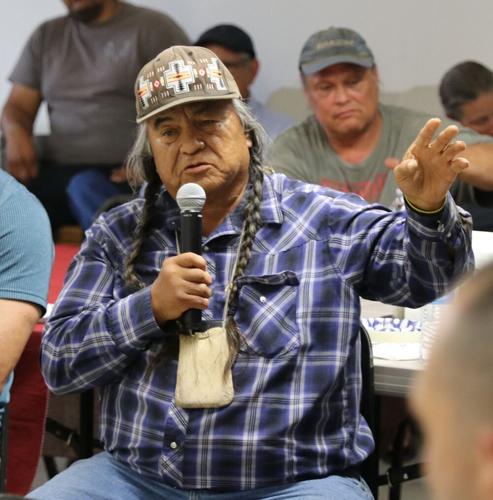 Jocko Valley resident Clark Matt questions presenters about the open-pit gravel mine at the end of White Coyote Road just north of Arlee. 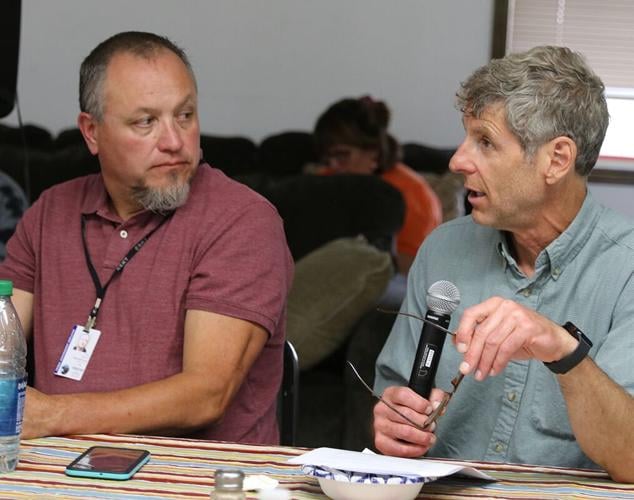 CSKT Legal Department attorney Stu Levit gives an overview of the open-pit gravel mine. Lands Department head Mark Couture is on the left. 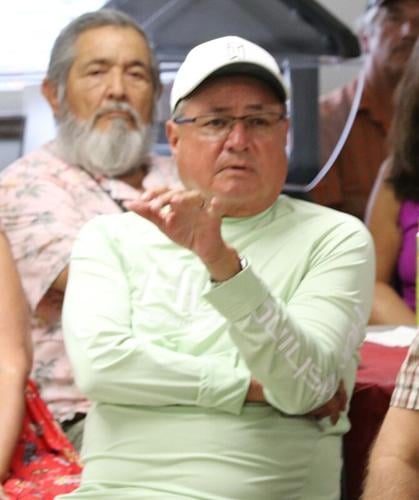 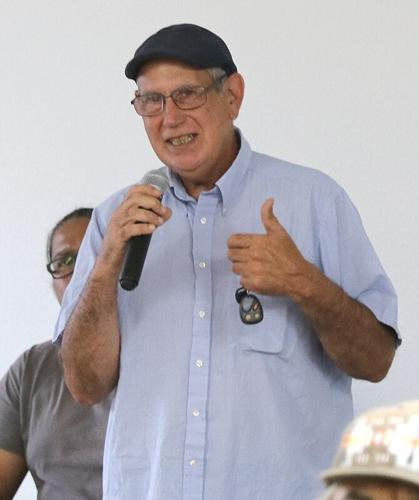 Greg Dumontier expressed his concern about Arlee and the Jocko Valley becoming an area for outside the Flathead Reservation developers of all sorts. 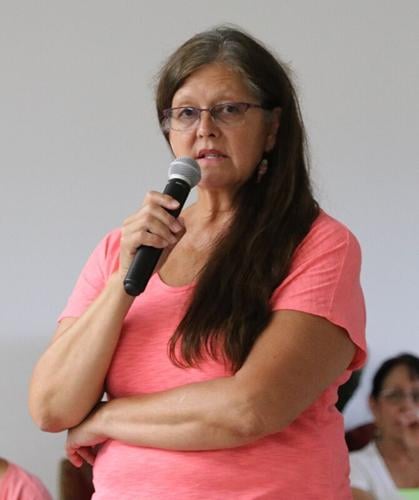 Former Tribal Council Chairwoman Shelly Fyant said she is very concerned about the effects of the open-pit gravel mine and asphalt plant on the natural wildlife environment.

Tribal Council Chairman Tom McDonald gave folks a ray of hope, via the CSKT Treaty of Hell Gate and the Montana Constitution in stopping the open-pit gravel mine.

ARLEE — It was a lively Arlee District Meeting Monday evening as a couple of issues grated against the grain of the majority of the 50 folks in attendance. The grating issues were the industrial development of an open-pit gravel mine and asphalt plant, and the Lake County Solid Waste Management program assessing users of its waste disposal facilities a $180 annual fee. Many already pay the fee via their fee land tax assessments but many don’t, including folks who live on tribal trust property.

On April 7, 2022 Riverside Contracting, Inc., owned by Marvin Rehbein, applied for a 20-year open-cut mining permit with the Montana Department of Environmental Quality for 157.1 acres of land Rehbein owns north of Arlee. It is located 1.3 miles east off of Highway 93 on White Coyote Road to the Martz Drive T-intersection.

Riverside Contracting, Inc. plans to mine gravel there and a portion of the 170-acre property that is not part of the 157.1 open pit gravel mine will contain a rock crusher and mobile asphalt plant. It will also recycle asphalt and concrete on the site. Asphalt recycling materials stored on-site can be no more than 1,500 cubic yards; remnants must be transferred off-site and disposed of at a legal disposal site as does the remnants of concrete such as rebar, etc.

There are many concerns from the area landowners adjacent to the proposed open-pit mine and accouterments. Only those who live within a half-mile radius of the mine could submit public comment however the concerns go far beyond the half-mile radius. The Jocko Valley is beginning to feel like a crash-test dummy for proposed industrial and residential development, case in point the proposed 99 residential subdivision that was recently denied by the Lake County Board of Commissioners. The Jocko Valley residents had a say in that but not so in the open-pit mine.

Wheeler said it was House Bill 599 that was passed in the 2021 Montana Legislature that provided less stringent oversight and regulations for open-pit mining and less opportunities for public comment by limiting it to, in this case, property owners that live within a half mile of the project.

Wheeler said the Confederated Salish and Kootenai Tribes own or have trust ownership of many parcels of land within the half-mile radius but are only considered as one owner. And to his knowledge, the CSKT were not given any notice of the project.

Wheeler said HB 599 prevents the DEQ from monitoring the open-pit gravel mine. Also, the CSKT are concerned about the potential negative effects of the gravel pit on the water as the site is over an aquafer and essentially an underground river that flows through the gravelly subsurface. Before HB 599, the DEQ could deny permitting open-pit gravel mining in areas with intermittent or perennial streams, higher groundwater levels or where surrounding hillsides were steep to avoid affecting water quality but that all evaporated with HB 599. The water table in the area is from 30- to 33-feet.

Levit said the gravel mine will be no more than 12-foot deep and will have to be reclaimed at a one-to-five slope with the surface soil scraped and stored on-site. The asphalt will be shipped off-site and would affect the traffic flow and the White Coyote Road’s ability to handle heavy loads without damaging it.

“The road surface will determine the size of the trucks,” Levit said, adding that using smaller capacity trucks would mean more traffic but either way “the increased travel on White Coyote Road will be substantial.”

The increased traffic flow would add to the “noise pollution” that includes the operation of the plant. Levit said the noise would not only affect the 29 land owners adjacent to the gravel mine but those too beyond the half-mile radius. He said the public can work with the DEQ and Riverside Construction about its hours of operation to curb some of the noise away from evenings or nights, etc.

Noise along with dust and toxins are huge concerns related to air quality.

To his knowledge, Levit said Riverside Construction, Inc. doesn’t have any asphalt projects in the area so that means the asphalt would be sold to another entity or used on Riverside projects elsewhere.

Levit characterized the gravel mine as small, and as such, the problems created by above-ground mining were very small and that reclamation of such mines is “pretty good.”

However, that did not assuage the feelings of the vast majority of the folks at that meeting where only one person offered a pro-comment on Riverside Construction and Marvin Rehbein, who is a major player in huge construction projects in the state and region.

Former Flathead Nation Tribal Chairwoman Shelly Fyant felt that the folks that live outside the half-mile radius are also affected by the gravel mine, et al, and did not have a voice on the issue. “This affects all of us in the Jocko Valley,” she said, adding that the main concern is about the mine’s effect on the water quality.

Fyant was also concerned about the hours of operation, noise, and wildlife. The DEQ permit only mentioned deer, coyotes, raptors, and rodents as wildlife in the area. There are also bears including endangered grizzly bears.

Fyant felt that the tribal land in the area belonged to the 8,000 members of the CSKT and their input should be counted as such and not just as one land owner.

“They (DEQ) are not following public open meeting policies,” she said. “We want a public meeting. Let our voice be heard by the state.”

Fyant said it was imperative that the upcoming 2023 Legislature revisit and remediate the negative effects of HB 599 that effectively issues carte blanche mining permits with limited public comment.

Jennifer Knoetgen, a landowner within a half-mile radius of the gravel mine, felt her and other landowners in that area’s voices fell on deaf ears. “The DEQ was not responsive to our concerns,” she said, adding that water- and air quality were the major concerns. “It looks like this can be approved at any moment now.”

Levit said that water quality in the permit was fairly limited and that water used for the mine would be stored in on-site water tanks.

In an ominous tone, Levit said that mining operations can change substantially during their operation and that it isn’t uncommon for them to go deeper. “Twelve feet can become 18 feet,” he said.

“This is the second time this little community of Arlee has faced this type of [encroachment on the rural lifestyle and natural environment],” Greg Dumontier said. “These things shouldn’t be happening here. There needs to be laws in place to protect the people from this.”

Dumontier wondered if there were CSKT laws or regulations that would be applicable in the prevention of such industrial development in the rural areas of the Flathead Reservation.

Randy Ashley, CSKT Air Quality program manager, said the CSKT have a Class I air shed rating that enforcement would be applicable to the open pit mine and asphalt plant. That would require someone “at the gate” to monitor the air quality. However, due to staff shortages at Air Quality that “someone” would have to be a community member volunteer.

Tribal Council Chairman Tom McDonald said the Flathead Nation has options to address the issue based on the 1855 Treaty of Hell Gate related to fish, wildlife and water as well as the Montana Constitution articulated right to a clean environment.

“I am pretty optimistic we can put this to bed,” McDonald said. “The Tribal Council doesn’t favor this.”

Levit said it could potentially be a test legal case if its focus is on the collateral deficiency of the natural environment for wildlife habitat such as bears, cats and migratory waterfowl.

Levit said that if the excavation goes deeper than the permit authorizes the state (DEQ) could say it’s a violation but cautioned that the permit could change over its 20-year span. “There are possibilities for major changes,” he said. “If more gravel is needed, more gravel they’ll get.”

The issue of the Lake County Solid Waste Management program’s $180 annual permit fee to use its rural site waste drop-off containers, and its landfills at Polson Kerr Dam Road and North Reservoir Road was somewhat like a cherry bomb going off in people's wallets - and it hurts. The fee is based on a family residential unit of 60 gallons of waste a week.

In its letter to the public, it states: “Some Tribal Trust residential landowners do pay this fee, but most Tribal trust landowners typically have not.”

Further, “Due to illegal dumping, identity theft from junk mail refuse, vandalism, and other concerns, the District Board of Directors decided to staff all rural container sites. Container sites are for use only by those residential properties in the Lake County/Dixon Joint Refuse Management District which pay the solid waste fee. Those not participating in funding the services are not authorized to use the facilities.

Mike Wheeler said that although it appears as a “tax” on fee land owners’ tax statements it is a “fee.”

At suggestions that the CSKT establish its own waste management sites, Wheeler said the CSKT could look as some of the former dump sites for rehabilitation and operation, and that the lease of the North Valley Creek container site lease to Lake County ends this year.

Wheeler said there are concepts are being discussed and that “anything is possible, on the table.”

Wheeler said he would be meeting with Mark Nelson, manager of the Lake County Solid Waste Management Thursday (August 4), and more should be known on the direction the CSKT want to go on the issue.

“Right now, it’s a big mess, not just for tribal members but for all people,” said Arlee District Councilman James “Bing” Matt in reference to the fee as well as the days and hours of operation.

The Lake County letter also states: “Along with staffing the sites, we will limit the days and hours at each site. Sites near each other will be open different days, to provide more opportunity for users to dispose of their waste. Our goals include stopping illegal salvaging, which includes riffling through everyone’s trash looking for drugs and information for identity theft; preventing dumping by folks that do not pay for solid waste and eliminating the dumping of construction and demolition waste that should go to the landfill. We are aware that contractors from out of county are using our unstaffed sites to keep from paying for disposal in their own counties. All these things increase costs to the district.”

As Wheeler said, more should be known about the future of the $180 fee, et al, after Thursday.