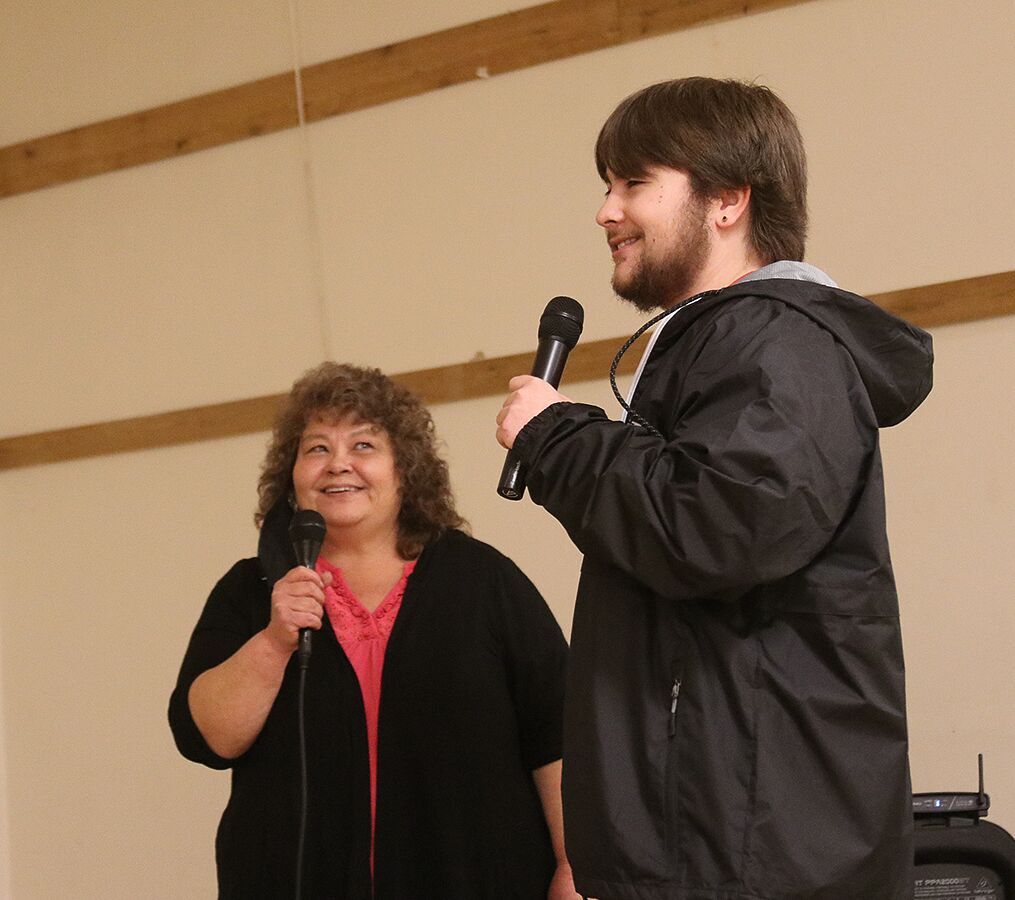 ARLEE — The Brown Building was the stage for young hip-hop musical artist Dustin Cordier, aka Dust2Dust, who went live with his COVID-19 youth outreach effort Sunday afternoon. He is the last performer for the Confederated Salish and Kootenai Tribes COVID Youth Community Care and Awareness Campaign with the Tribal Education Department that began this past summer in the Arlee area.

The youth awareness outreach effort began in Arlee with the performance of Shadow Devereaux, aka ForeShadow. Now Devereaux is heading up the youth team of musicians that will be now focusing on the Missing and Murdered Indigenous People effort. The Tribal Education Department Director Michelle Mitchel will be overseeing the new public information effort.

Dustin and his mother, Sally Cordier, tag-teamed his COVID-19 song. Sally gave the short intro and Dustin took it from there with a heavy beat that accompanied the ‘wear a mask, wash your hands and social distance’ message.

“You killed it dude. Good luck,” Devereaux shouted at the end of the performance.

“That felt good, really good,” Dustin said after his performance. “I was stressing out about nothing. I have gone from karaoke to making music.”

Dustin said he still isn’t sure if he’s ready to perform before an audience but felt that will come along in due time. He said he’s thankful for the opportunity to perform for the youth awareness outreach.

“I wanted my song to spread a message about wearing masks, while still having a happy sound and a positive outlook that could hopefully bring listeners joy in these dark times,” Cordier said. “I hope that my song will contribute towards the fight to keep our families and communities safe, one mask at a time.”

Dustin gave his mother kudos for him getting into music, and considering if he can make a go of it professionally.

“I’ve always been into music, listening to old rock songs that my mom used to play, but it wasn’t until I was introduced to hip hop that I found the genre I fell in love with,” Dustin said. “Since the beginning of High School, me and some friends talked about wanting to make hip hop music, but it wasn't until this year when the quarantine started that I decided to do it.”

Dustin said his musical influences started out with artists such as Kendrick Lamar, J Cole, and Drake, but ever since then he has widened the range of artists he enjoys listening to.

“I made my first song called 'Let Me Know' after listening to an artist named Koi, who I take heavy influence from for every aspect of my music,” he said. “After making that song on a whim, I found that I had a real passion for music.”

That passion morphed a hobby into a serious pursuit of a musical career and he adopted a stage name of Dust2Dust.

“Having seen some of the songs that were made for the COVID campaign, I was honored to be given the opportunity to be a part of it. I wanted my song to spread a message about wearing masks, while still having a happy sound and a positive outlook that could hopefully bring listeners joy in these dark times,” he said.

His parents Sally and Rich Cordier are proudly backing him and his musical adventure.

“I can’t dance and I can’t sing but I love to do it anyway. This has been a good experience. I am a proud mother. Dustin started making music during the pandemic and he has come a long way,” Sally said, adding that Devin, Dustin’s twin brother, a gifted artist has been creating cover art for his brother's music. “We are excited about all this and where this could take him. We all hope Dustin does well.”

Dustin’s dad, Rick Cordier, was also feeling upbeat about Dustin’s performance. “I’m very excited for him and looking forward to this adventure,” he said. “I’m very proud of both of the boys.”

Devereaux was the first hip-hop artist to perform for Confederated Salish and Kootenai Tribes COVID Youth Community Care and Awareness Campaign with the Tribal Education Department this past summer in the Arlee area. And in a way, Dust2Dust’s performance brought it full circle.

The focus has now shifted to the Missing and Murdered Indigenous People effort. He and fellow hip-hop artists Kiid Truth, and Yvng Vin will be working on coming up with compositions and presentations for the MMIP campaign.

“Everybody knows about the issue and most know someone who is missing,” Devereaux said. “We’re all family and we have to look out for each other. This affects the whole reservation. I am glad to be a part of the next messaging effort.”

Check out Dust2Dust's performance on: