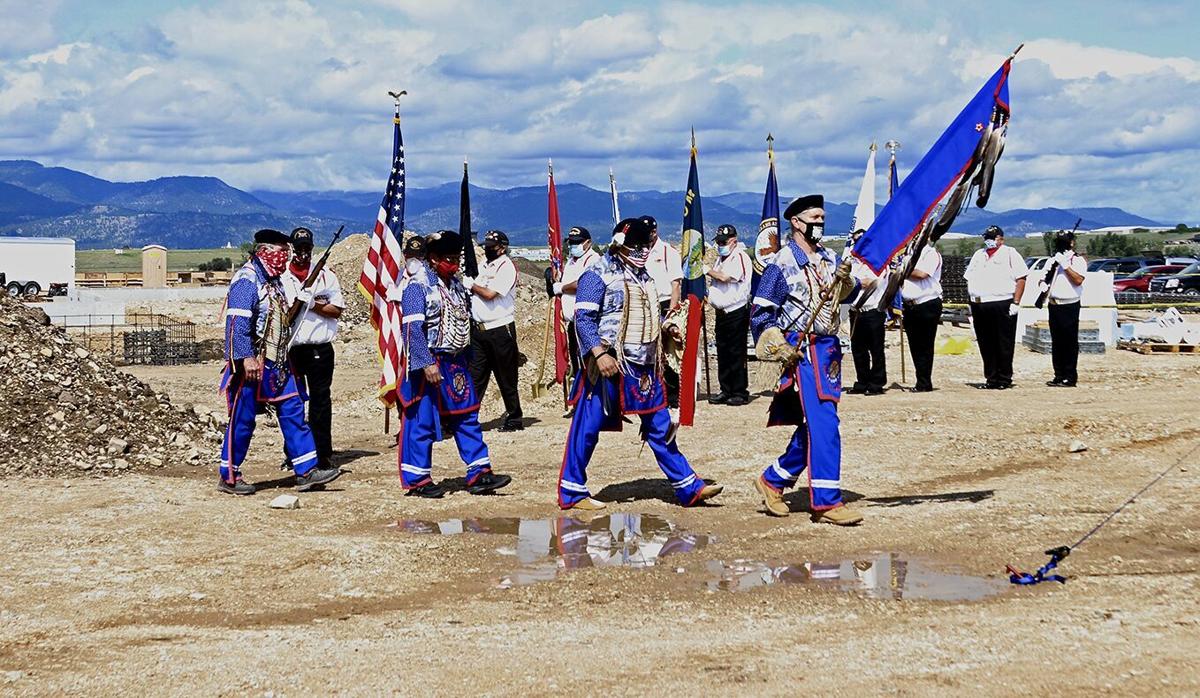 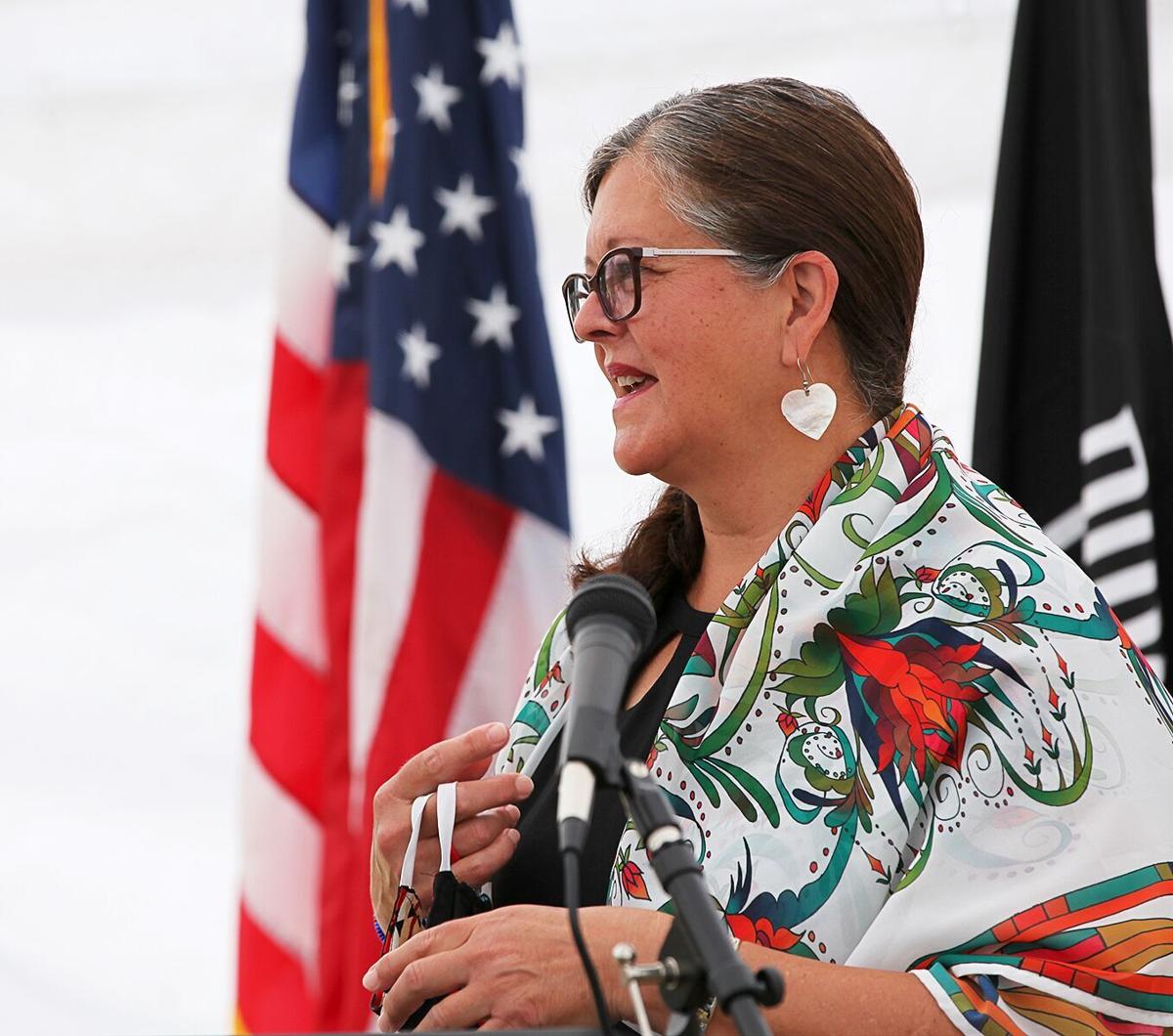 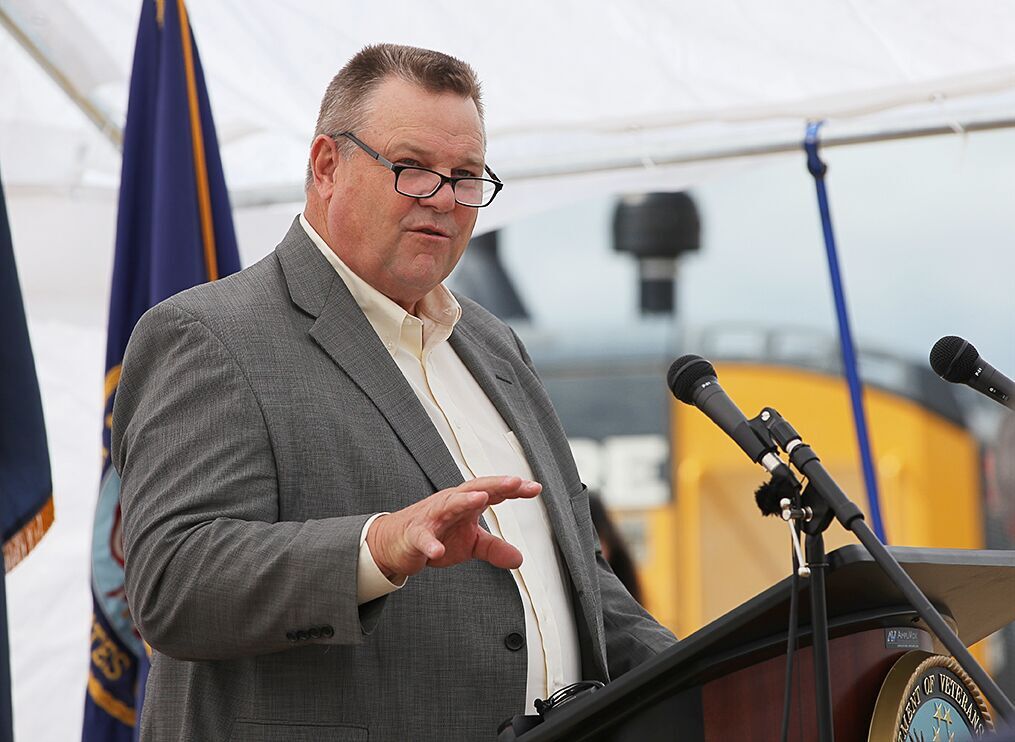 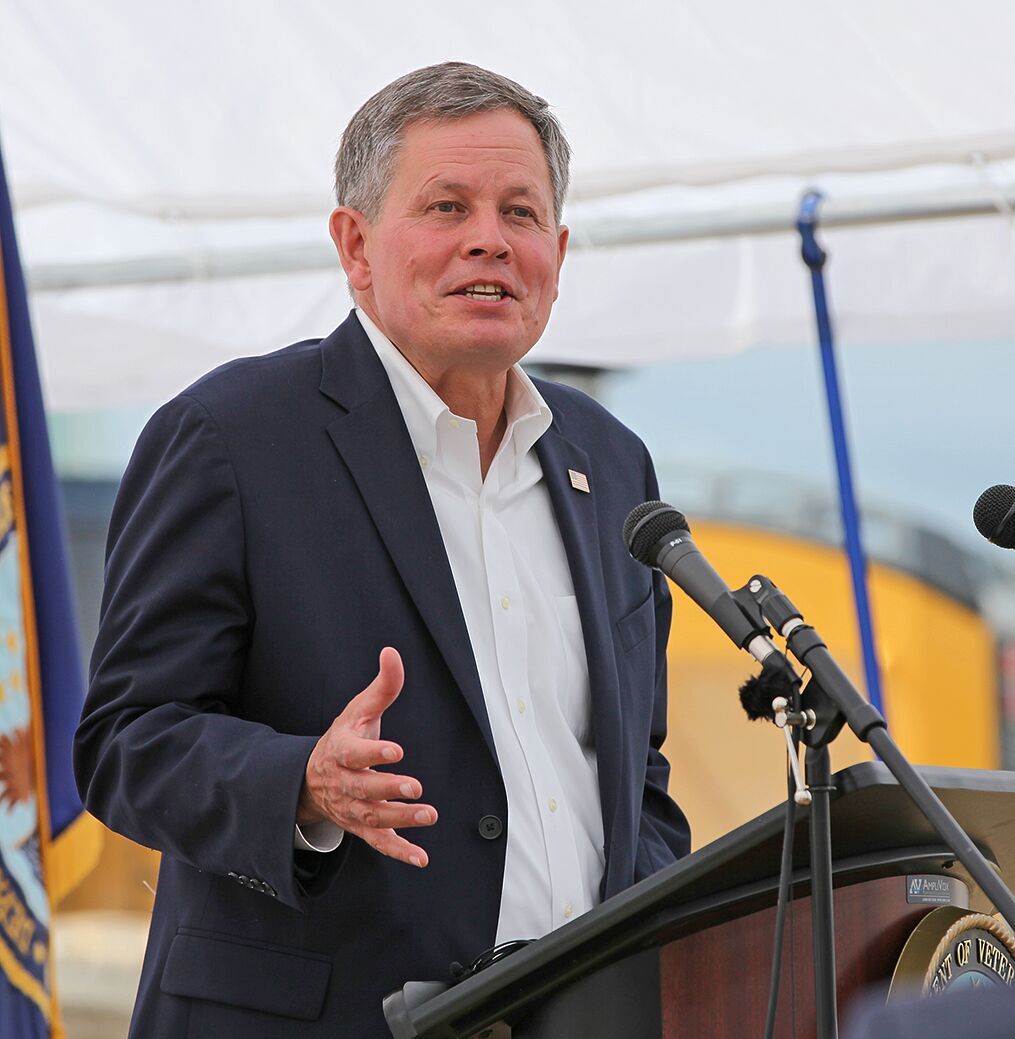 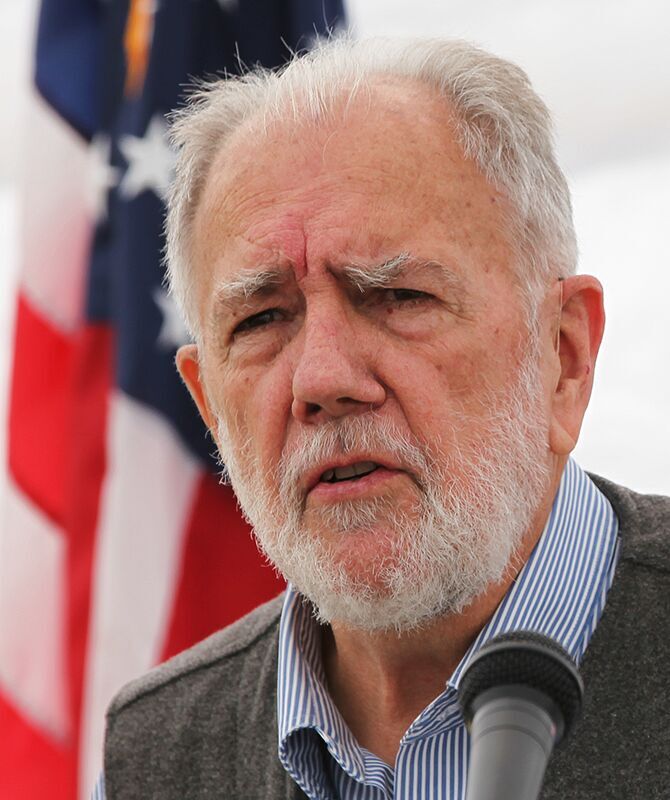 Jeff Miller, son-in-law of David J. Thatcher, discussed his father-in-law’s humble nature at the clinic dedicated to him Friday. 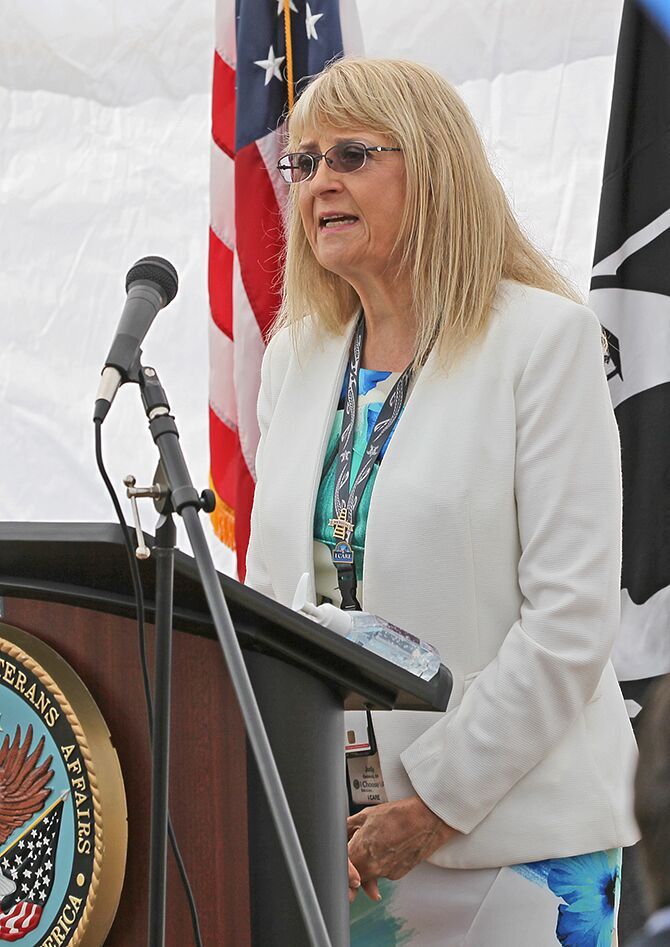 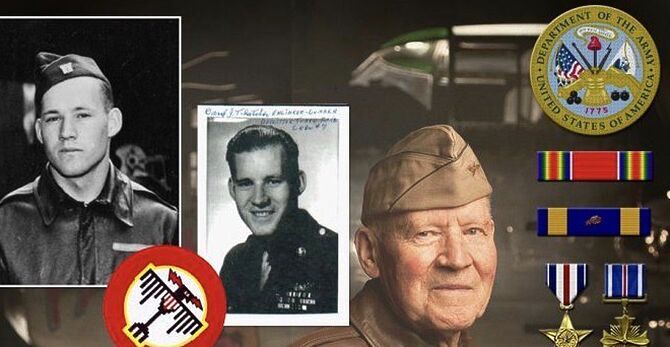 MISSOULA — On Friday, June 10, the ceremonial groundbreaking of the new Veterans Affairs Clinic was held on West Broadway before a COVID-19 limited crowd of politicians, VA officials, Veterans, Flathead Nation representatives, construction personnel and the family of David J. Thatcher. The World War II hero is the namesake of the David J. Thatcher Veterans Affairs Clinic. Thatcher, a U.S. Army Air Corps Veteran, volunteered to serve as a tail gunner for a high-risk mission to attack targets in Japan in April 1942, four months after the attack on Pearl Harbor.

“It’s important that we honor our Warriors; that was instilled in us from the day we were born. We were born to be Warriors till the day we leave,” Incashola said. “Our parents, our Ancestors taught us how to survive. How to protect our people and our land.

“We are taught to give back. Today we give respect and honor a great Warrior. Incashola said. “It’s an honor to stand among great Warriors. We are all here as Warriors that protect our way of life.”

“I’m so honored you’d invite us, our people, our Veterans to this dedication,” said Flathead Nation Tribal Council Chairwoman Shelly Fyant. “We are people who still live with our land. The Missoula Valley, the Bitterroot Valley — all over here — is sacred ground. Our Ancestors’ footprints are all over this valley. This place for wellness — for physical, emotional and spiritual healing for Veterans has been a long time coming.”

Director of the Montana VA Dr. Judy Hayman said the new $31 million state-of-the-art clinic will be in one contiguous space — the current VA clinic is housed in two separated locations on Palmer Street — and designed around the VA’s integrated Patient Aligned Care Team (PACT) model.

“Today marks the next step forward for our service to Veterans. Montana’s Veterans deserve and have earned access to the best health care our country can offer,” Hayman said. “Today we are breaking ground on the largest clinic in north western Montana; a patient centric facility where the patients are seen by various providers that come to the Veterans who remain in one room. It is a one-stop approach.”

Thatcher’s son-in-law Jeff Miller told folks in attendance that the Thatcher family was “incredibly grateful” for naming the VA Clinic after his father-in-law. “Personally, I would like to thank Tony and Shelly for being here and sharing this sacred ground.”

Thatcher also paid respect to the Mission Valley Honor Guard and the Veterans Warrior Society as well as the Veterans in attendance for being a part of the “sacred honor” of the David J. Thatcher VA Clinic groundbreaking on “sacred ground.”

He said Thatcher was a humble man who if he was in attendance, he would deflect any praise to his 79 fellow Doolittle Raiders, and those who died in World War II as the real heroes. (See sidebar for more details on the Doolittle Raid).

“If Dave were here today, he would quietly defer recognition to others,” said Thatcher son-in-law Jeff Miller. “The Thatcher family is grateful and honored, but it’s not for Dave. It’s for all the veterans. They did their job, just like Dave did his. We owe them the best care possible.”

“This is a good day for the VA, for Veterans and for the country,” said Senator Jon Tester (D-Mont.) to the folks gathered at 3885 West Broadway, site of the new Missoula Veterans’ Affairs Clinic. “It took a lot of folks to get us here.”

“For far too long, veterans in Western Montana had to make do with an undersized clinic and overworked staff—but no more,” Tester said in his statement. “This new facility will provide health care to many of Montana’s 47,000 veterans who use VA services, and give doctors, nurses, and other medical staff an expanded and high-quality space to do their jobs—and I was thrilled to help jump-start it in the Senate. I’ll continue fighting tooth and nail to make sure that this project stays on track, and that VA does its part in delivering a facility that is worthy of our veterans’ service.”

Sen. Tester, long a champion of Veterans, is the ranking member of the Senate Veterans’ Affairs Committee, gave a bit of history of the effort to build a new VA Clinic in Missoula. Tester began the push for the new facility in 2014 when he urged then-VA Secretary Eric Shinseki to hasten the much-needed expansion of an out-patient clinical facility to serve Missoula area veterans. The following year, with a change of guard at the top of the VA, Tester convinced then-VA Secretary Bob McDonald tour the existing approximately 20,000-square feet VA clinic on Palmer Street that is divided between two buildings. As a result of the tour and Tester’s other efforts for the facility, in 2019 the VA announced that Missoula would be the recipient of a new Community Based Outpatient Clinic.

In his address, Senator Steve Daines (R-Mont.) thanked all who worked to make the new clinic a reality.

“This was team ball to get this done. It takes both sides of the aisle to get an outcome like this,” Sen. Daines said. “In this day of divided politics, and this sometimes-divided nation it’s nice to see the country come together for moments to see outcomes like this. This is about America and taking care of those who protect that flag no matter what political persuasion you might have.

Mike Waters, spokesperson for Representative Greg Gianforte (R-Mont.), who wasn’t able to be in attendance, said Gianforte thanked the VA for naming the clinic after “an outstanding Montanan,” and the Veterans for their service.

The new David J. Thatcher VA Clinic will be located at 3885 West Broadway and will be approximately 60,000 square feet in size and situated on eight acres. The new state-of-the-art clinic will be in one contiguous space and designed around the VA’s integrated PACT (Patient Aligned Care Team) model.

The MTVAHCS serves more than 47,000 enrolled Veterans across Montana — an area roughly 147,000 square miles in size. Veterans are cared for by a staff of nearly 1,200 at 17 sites of care across the state.  One third of Montana VA employees are Veterans.

According to the Montana VA Health Care System, the Big Sky state has one of the highest per capita populations in the United States, about 9.4 percent as of 2017. There were 96,369 total veterans in Montana that year, with 73,000 eligible for VA health services and only 47,000 of those enrolled with the VA Health Care System.

The new West Broadway location will be easy to access from the interstate, is situated on a bus line, and will have increased parking — approximately 260 parking spots with 44 handicap accessible parking spots. The new clinic is projected to be completed in the winter of 2021.

The current David J. Thatcher VA Clinic, which is located on 2687 Palmer Street Suite C, will continue to serve Veterans until the new clinic opens.

The April 18, 1942 counterattack that came to be known as the Doolittle Raid after its commanding officer Lt. Colonel Jimmy Doolittle. It was meant to bolster the spirits of Americans following Pearl Harbor.

It was the first aerial bombing of mainland Japan, including Tokyo. It was a one-way mission for the 16B-25 Mitchell twin engine bombers and the 80 crewmembers. There wasn’t enough fuel to get back to any American land bases, and the bombers couldn’t land on aircraft carriers because they weren’t built for such landings on the short floating airstrips.

They had to launch into the wind to gain enough lift to gain flight. The B-25 Thatcher was in barely made off the aircraft carrier as its tail scraped the end of the carrier and dipped seaward before gaining enough wing wind to ascend. The bomber became known as the Ruptured Duck. It was later salvaged by the Japanese and put on display in Tokyo.

After finishing the bombing mission and running low on fuel, his aircraft crash-landed near the coast of China. Thatcher was instrumental in helping the crew reach safety following the crash and for his actions during the Doolittle Raid, he was awarded the Silver Star. Some of the B-25 crews that landed in China were captured by the Japanese military and executed via beheading.

A few years later, the actor Robert Walker portrayed Corporal Thatcher on the silver screen in “Thirty Seconds Over Tokyo.”

After the war, Thatcher embarked on a career with the U.S. Postal Service and married his sweetheart, Dawn. Their marriage spanned seven decades until he passed away in June 2016 at age 94. Dawn Thatcher passed away in May 2020.