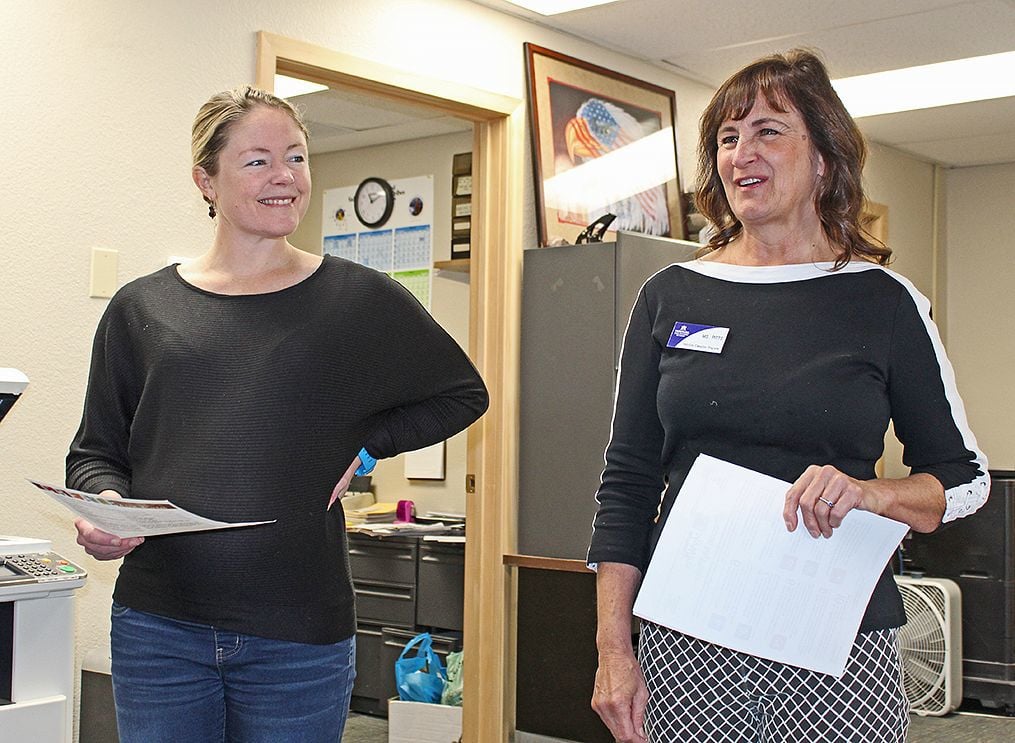 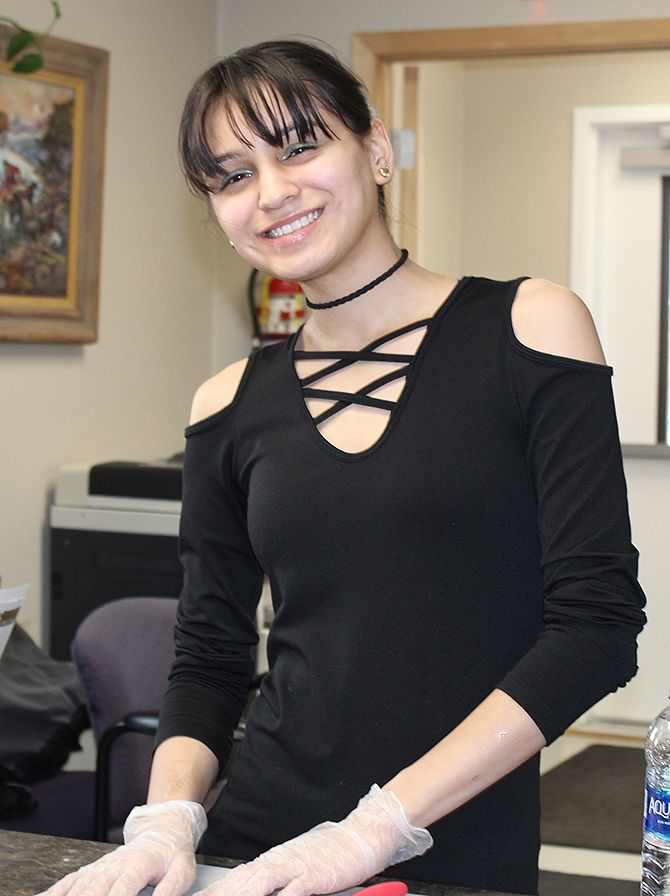 Chaise Yonkin smiles for the camera while waiting to cut the potatoes. 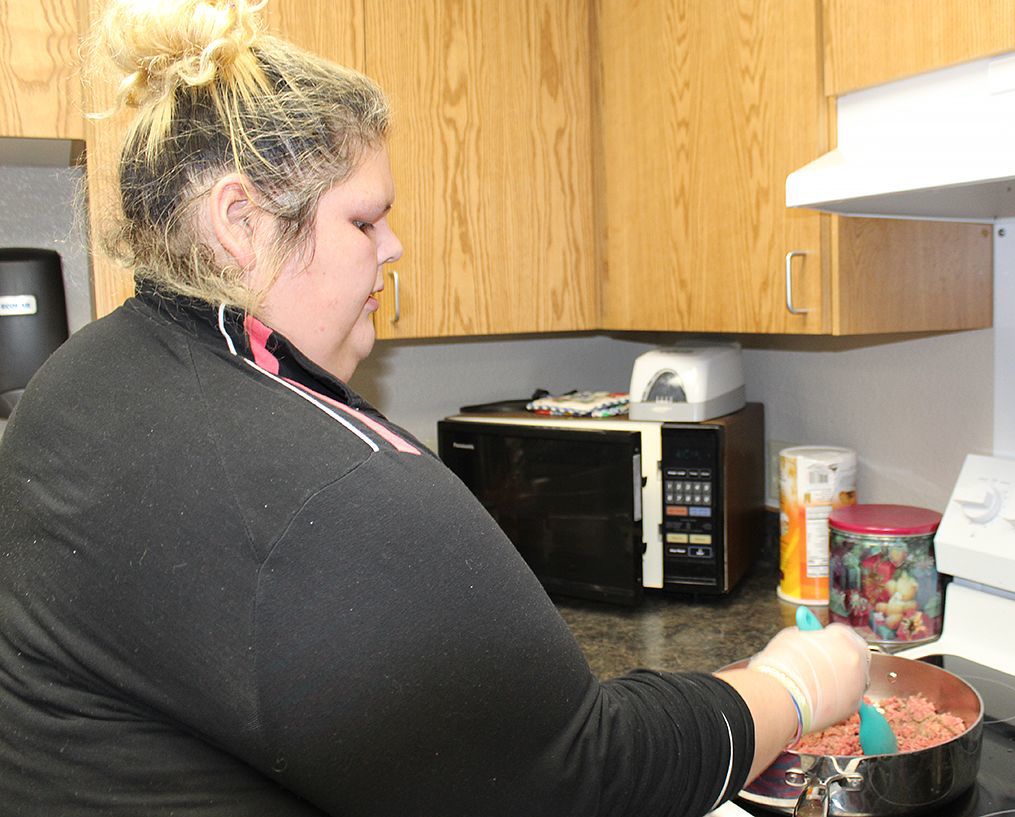 Felicite Miller seasons and cooks the bison meat for the stew during a 'commods' cooking class. 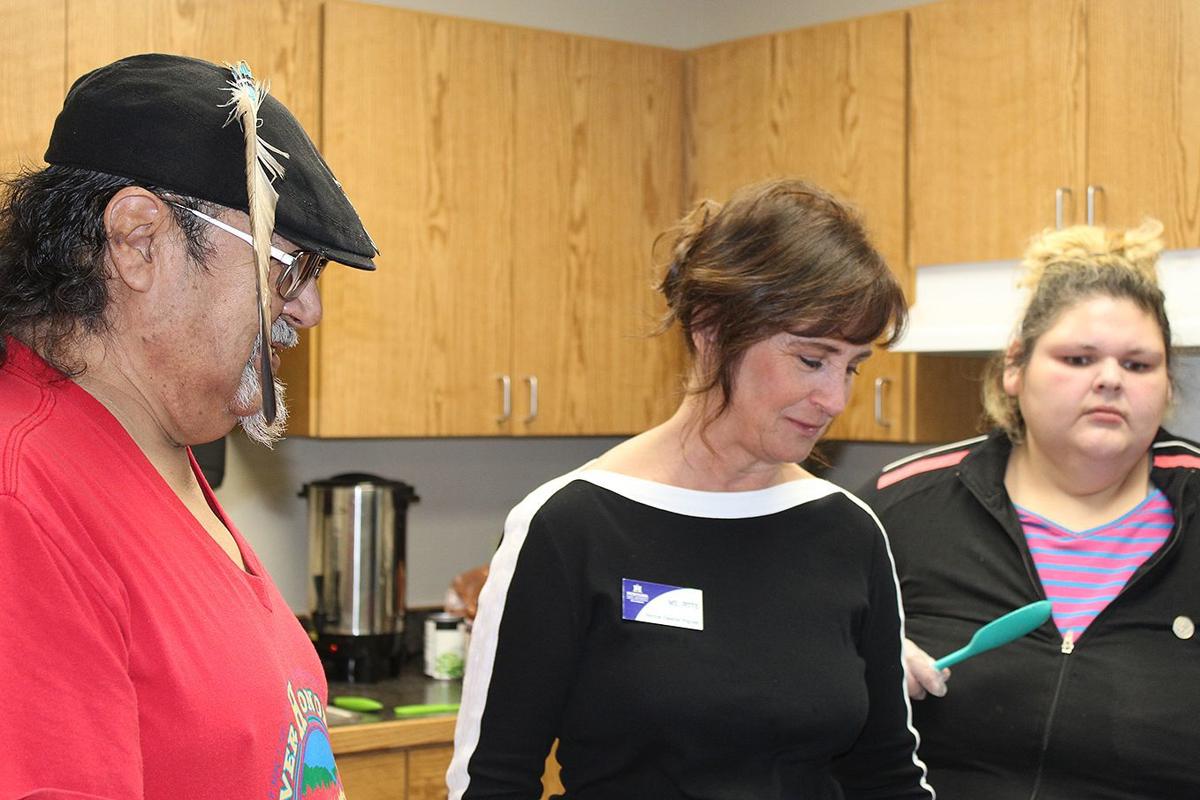 Chaise Yonkin smiles for the camera while waiting to cut the potatoes.

Felicite Miller seasons and cooks the bison meat for the stew during a 'commods' cooking class.

ST. IGNATIUS — How do you cook a healthy meal at home with the items you receive from commodities? Kati Burton, CSKT Tribal Health Dietitian and Ginger Pitts SNAP-Ed Nutrition Educator from Montana State University teamed up and taught a creative commods class. In the class Burton and Pitts educated seven community members on how to use what they have in their pantries.

Food Distribution Programs on Indian Reservations (FDPIR), also known as commodities or ‘commods’, started 150 years ago. Items given to tribal members were minimal. Tribal people had to learn how to use new items such as flour, and lard turning them into flat, deep fried discs -- what we today call frybread. The food aid program has become a significant aspect of the traditional foodways for tribal members. Although frybread has become a cultural symbol it shows the governmental dietary assimilation efforts, according to Dana Vantrease’s essay Commod Bods and Frybread Power: Government Food Aid in American Indian Culture.

To change the culture and use of commods, CSKT Tribal Health Department showed participants how to cook these food staples into healthy and delicious meals for the household.

Pitts handed out a ‘create a skillet’ sheet that provided basic information on how to create an easy dish. To start your dish you have to choose a protein for this specific class. They chose bison meat as it is a protein available from St. Ignatius commodities store. Moving on to your starch they chose potatoes; and to add flavor, they chose seasonings of Garlic, mixed meat seasoning, Celery seed and salt. For vegetables the group chose green beans, peas, and carrots. The base of the dish was a can of cream of mushroom soup and boiled starchy water from the potatoes. The stew turned out to be an amazing dish that smelled great and filled you up after one bowl.

Chaise Yonkin, who was one of seven who attended a class last week at the St. Ignatius Commodity store, said, “I have a large family at home. With the amount of people in the house it’s hard to make the food last. So I am learning how to cook meals with the items at home that fill up the family and taste good.”

The class did just that. It educated not only how to make a filling meal, but Burton talked about the different types of vitamins and nutrition you receive from eating certain items. A potato is a good source of vitamins C and B6, manganese, phosphorus, niacin and pantothenic acid. When you leave the skin on a potato you gain fiber from the skin which helps your digestion. Salt has many different forms and salt comes from many places such as the ocean, volcanoes, and even rocks; not only does it come from different places across the world, but it comes in various colors such as pink, red, blue, green and black. The most common salt is table salt which is a highly refined salt, usually between 95 percent to 99 percent pure sodium chloride and is meant for bringing water to a boil or baking; it is not recommended to be used as a finishing salt or as table salt despite the title.

If you feel like you’re struggling to learn how to cook with your commods, join Kati Burton in her Creative Commods Cooking class. The classes are the last Thursday of every month.

If you would like to take another cooking class with just the idea of cooking on a friendly budget, contact Ginger Pitts at (406) 675-2700, Ext. 7377 or email her at gpitts@montana.edu. If you would like more info about the Creative Commods Cooking call Kati Burton at (406) 317-3751.