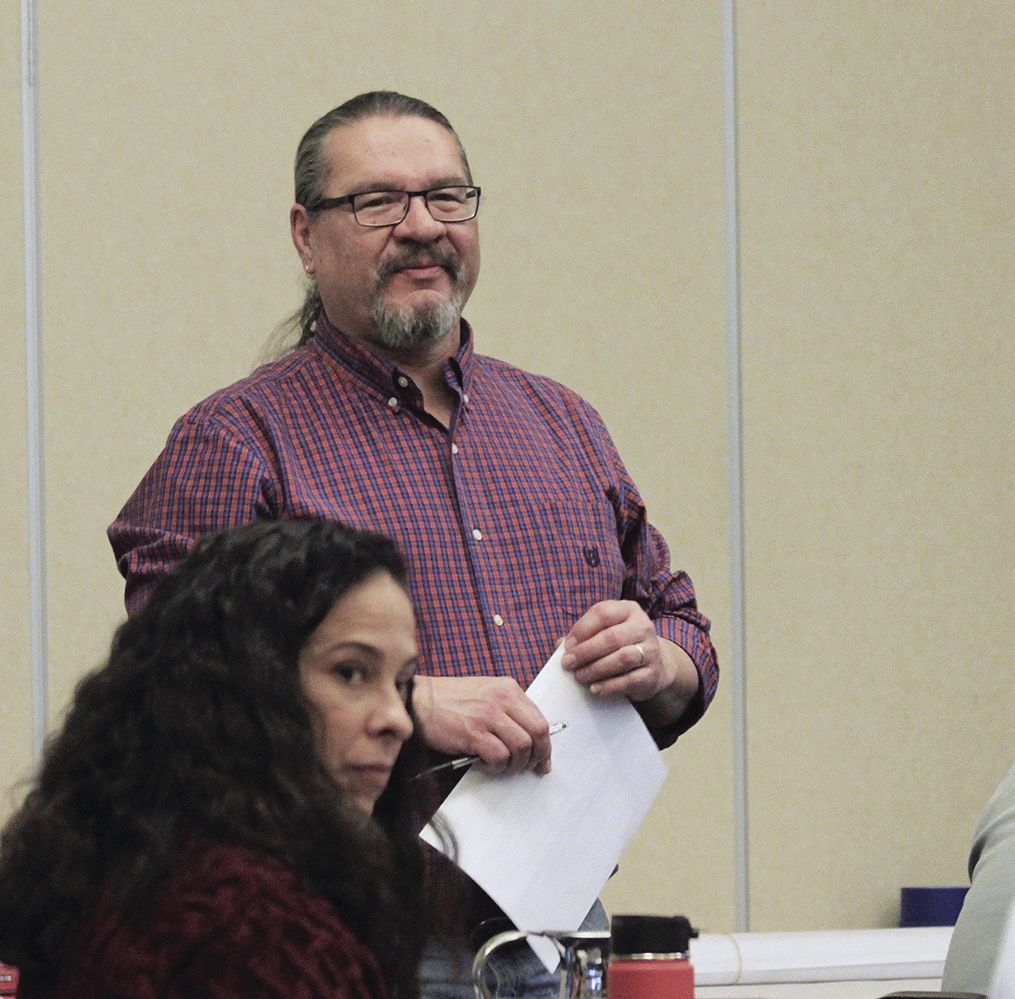 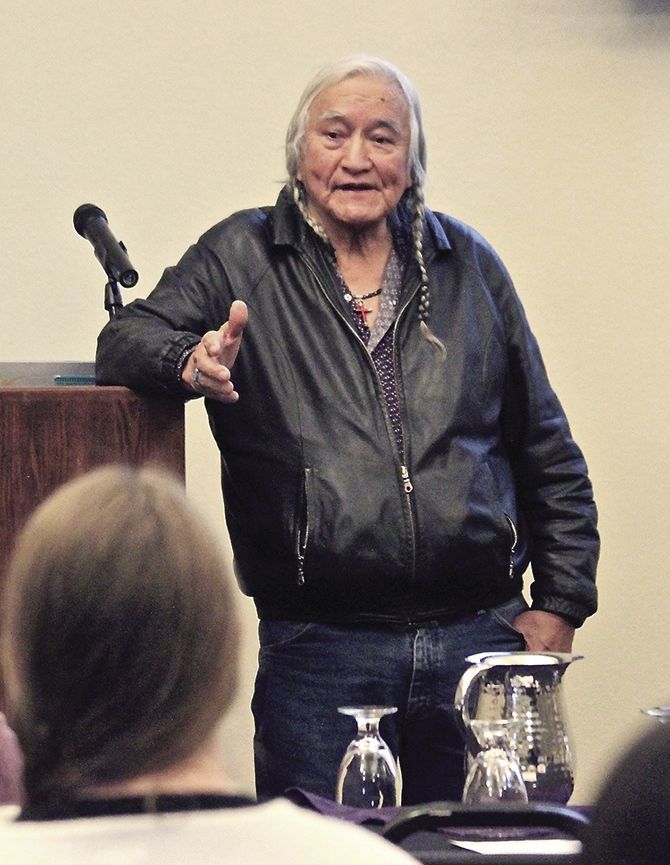 Elder Stephen Smallsalmon shares stories he heard while growing up that relates climate change with the CSKT climate change steering committee last month. Smallsalmon opened the meeting in prayer and remained through the day in group discussions.

The CSKT Climate Change Steering committee members held their first gathering in March at the KwaTaqNuk Resort. Not all committee members were present for photo. The committee will meet three more times: April 17, May 22, and June 5.

Elder Stephen Smallsalmon shares stories he heard while growing up that relates climate change with the CSKT climate change steering committee last month. Smallsalmon opened the meeting in prayer and remained through the day in group discussions.

POLSON — “My Elders used to say ‘You people are in trouble.’ Nah, they are just talking for nothing, I thought. Now I’m saying that,” Pend d’Oreille Elder Stephen SmallSalmon told the Confederated Salish and Kootenai Tribal Climate Change Steering Committee members at the recent Community Resilience to Climate Change meeting. The March 13, confab at the KwaTaqNuk Resort and Casino was the first of four such gatherings on the March, April, May and June calendar.

Climate change planning is not new in Indian Country. According to a June 2013 report from the Environmental Protection Agency (EPA), tribal people historically have recognized and prepared for changes in the climate for many centuries. Often leading the way of the tribal ecological knowledge (TEK) thought process and discussions were observational stories handed down through time by Elders and their observations of the natural world they were a part of.

In 2013, the CSKT produced its Climate Change Strategic Plan. Michael Durglo, Jr., CSKT Preservation Office manager, led the plan effort. He has been a listened-to voice locally, regionally, nationally and globally on climate change effects from observations and data related to the Flathead Indian Reservation area.

However ever-changing climate affects planning. Consequently for the next four months folks from the Flathead Reservation and environmental groups from throughout Montana and its tribal nations will be working together to update the CSKT climate change adaptation strategy. During the all-day meetings set for March to June, steering committee members can share their perspectives, observations and planning goals. The members will be encouraged to integrate any TEK as a valuable touchstone that is unique to the Salish, Pend d’Oreille and Kootenai community.

The task of CSKT climate change adaptation gatherings is to develop actions to prioritize and address the threats facing tribal lands and interconnected landscapes as well as update the CSKT Climate Change Strategic Plan.

“As a tribal community, coming together, highlighting each other’s strengths while also bolstering areas that need support, we can share knowledge and the opportunity to come together, share knowledge, and work collaboratively for resources impacted by changes in climate,” Durglo said.

According to the 2009 scientific report from the “Global Climate Change Impacts in the United States” the Northwest has already observed climate changes including an average increase in temperature of 1.5°F over the past century.

In 2013 the CSKT Climate Change Strategic Plan prioritized white-bark pine restoration as an adaptation action. According to the CSKT Adaptation Committee, in the last five years, the Division of Forestry team has worked with an Idaho laboratory to identify, grow and plant seedlings with greater resistance to the white-bark pine beetle. These types of adaptation efforts increase forest resilience to a warming climate as well as increase the chance that this culturally important pine species would persist.

Durlgo said the Climate Change Steering Committee will be the first to rewrite the CSKT Climate Change Strategic Plan, “It will be based on updated climate models compared to the model that was used in developing our plan in 2013,” he said. “Everything is happening much sooner than was predicted back then.”

In February 2019 Dr. Travis Belote, a research ecologist from the Wilderness Society ran some climate models featuring different scenarios for the Flathead Reservation. It will be broken into nine sectors that could be added to during the upcoming meetings as discussions on updates occur. The base sectors include: infrastructure, air quality, land, culture, fish, people and health, wildlife, water, and forestry. The group is encouraged to ask questions about Dr. Belote’s findings and methodology.

The first of the four climate change meetings in March focused on “Information and Inspiration” through understanding the process format, expectations, goals, adaptation planning as an opportunity to make a better future, and reviewing CSKT past successes and identifying shared vision, strengths, and understanding links between landscape health and human health in a changing climate.

The April gathering will focus on “Vulnerability” by reviewing strengths in the sectors and work together to project climate impacts in each sector; identify links while ranking areas of vulnerability in sectors.

May’s gathering will concentrate on “Resilience” with identifying possible outcomes by sector; and ranking ability to execute possible solutions; and sharing strategies to communicate health related impacts in the community.

The wrap-up gathering in June will focus on “Solution Integration” by identifying action steps to each outcome, deciding who will take the lead with a timeframe included to achieving each step, and funding sources; narrowing down understanding and sharing ways to mainstream climate change actions across departments, such as using the health sector as an example. The team is expected to discuss next steps in climate change planning and implementation, including identifying people responsible for leading the next steps

The MCA report also states that the number of extreme heat days will increase in frequency; drought and flooding will increase in early spring and summer; and wildfire season will also lengthen.

Durglo said he felt the first gathering went well, but added he was slightly disappointed that some people he felt should have been at the meeting were not. “I was very grateful for those that were able to participate,” he said.

The data and predictions of climate change and its effects on Montana and tribal lands are not lost on the meeting participants, and only hastens the need for solutions and preparation. They have to look no further than north of the Artic Circle where the changing climate is drastically changing the natural environment and negatively affecting human and animal lives as tribal villages are either consumed by the rising ocean or gobbled by the melting permafrost. It like the ocean- and sea-islands being eaten away by the rising sea levels are the canaries in the mineshaft.

“While we are sitting here I hope we learn something,” SmallSalmon told the group. Listen to the canaries before they can’t sing because by then it could be too late to save Mother Earth.