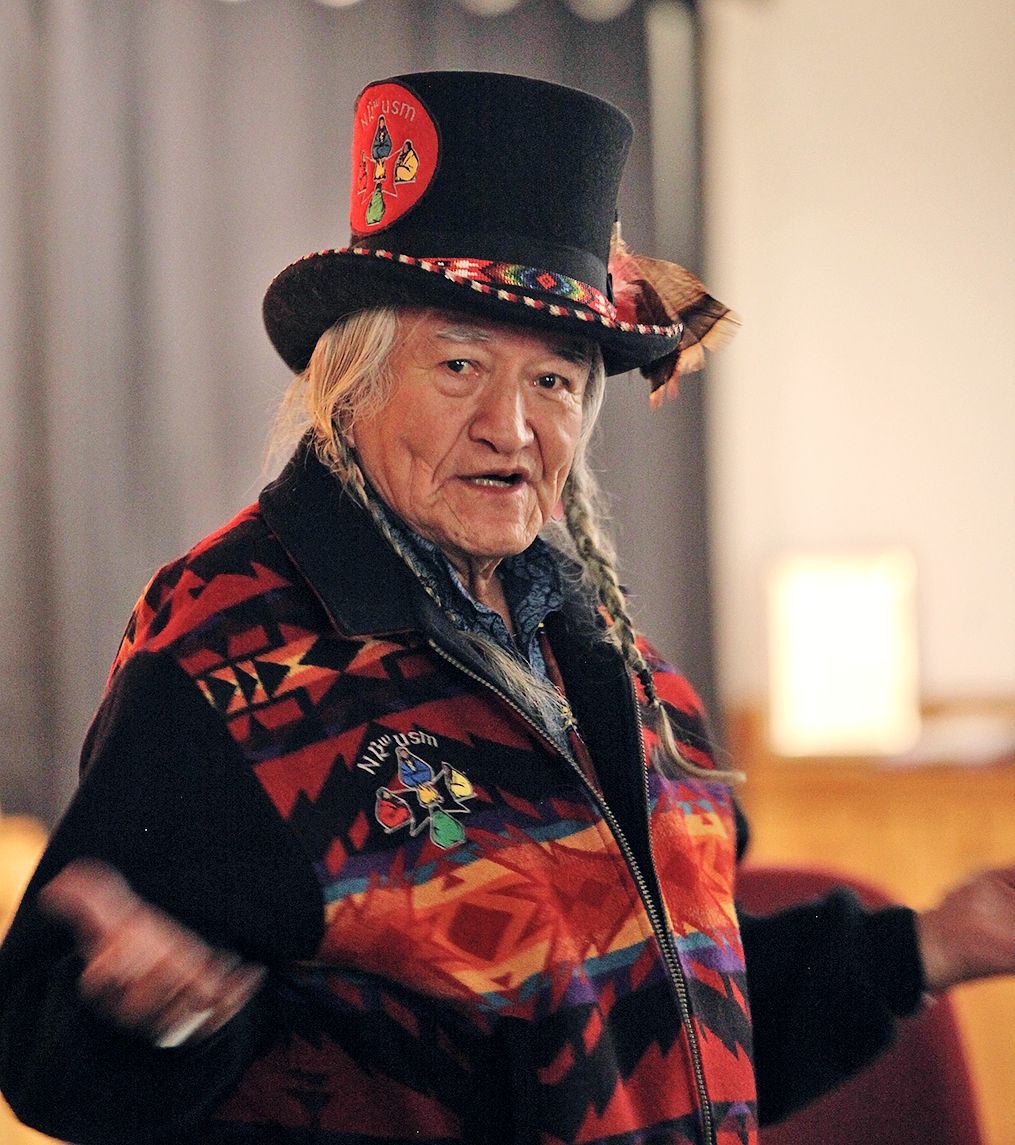 Pend d’Oreille Elder Stephan SmallSalmon opens the Coyote Stories Night with a story about the Coyote and Fox and the danger of eating too much. 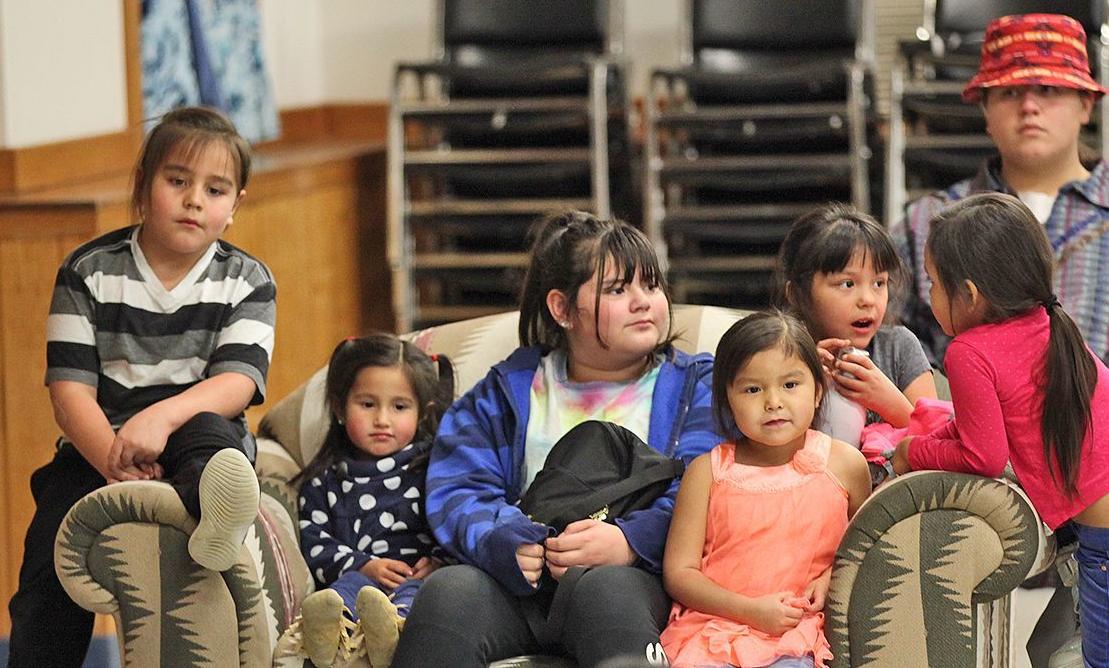 The Coyote Stories stage is almost set these young ones are ready for a night of storytelling. 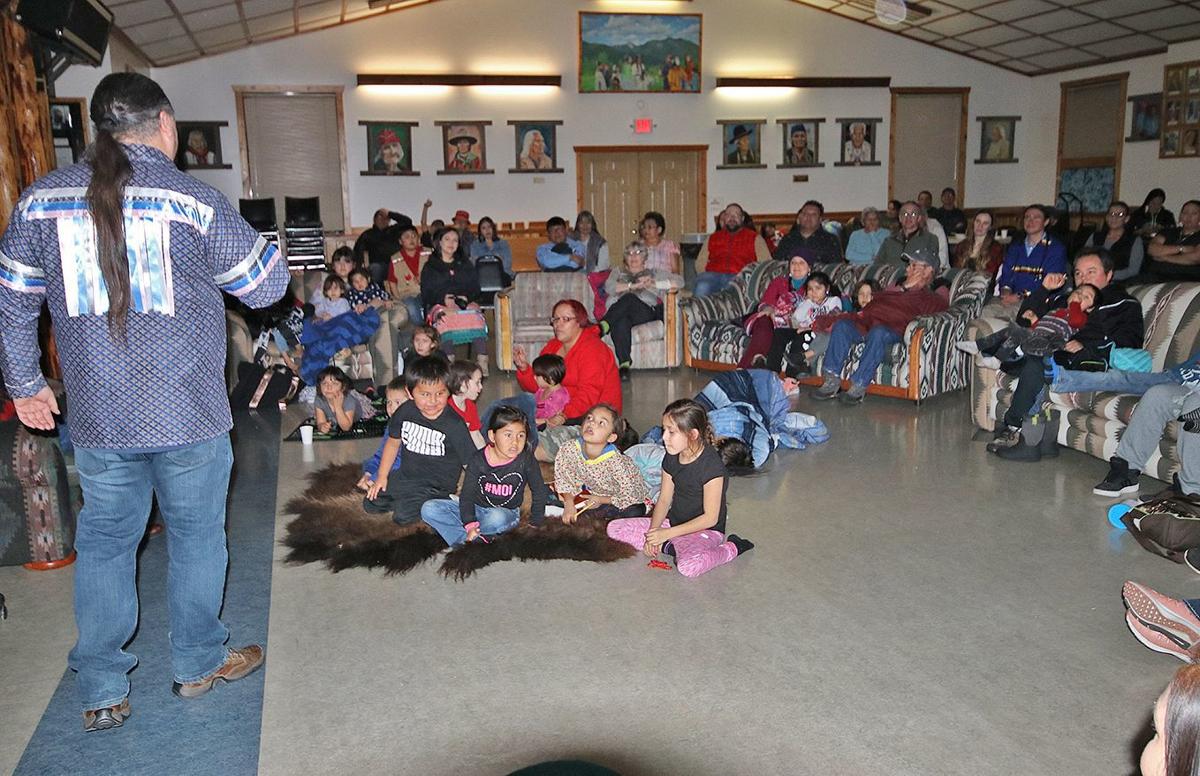 ST. IGNATIUS — Coyote Stories are a time immemorial part of many Aboriginal people’s oral traditions including the Salish and Pend d’Oreille tribes. They are sacred Creation Stories, as well as educational stories related to everyday existence of the people and their environment, all with a spiritual shadow. The Coyote Stories lessons illuminated both sides of the human condition — good and bad — and why walking the world in a good way was the preferential path all should take as it was benevolent to the soul of the individual and nurtured the spirit of the people. They are just as relevant and powerful today as they were in the days of Creation— a guiding light.

Coyote Stories are traditionally told during the long dark days of winter. Last Friday, that guiding light was lit in the Salish-Pend d’Oreille Longhouse for the more than 60 multigenerational folks that came to listen to the Coyote Stories told by young adults involved in the Salish Language Adult Apprentice Program and Pend d’Oreille Elder Stephan SmallSalmon, who also emceed the winter evening gathering. The stories were first told in Salish and then in English — that highlighted the proficiency of the apprentices’ well-learned Salish lessons.

“When I was young my grandmother and grandfather would tell us Coyote Stories every night during the winter. We didn’t have electricity; we had kerosene lamps and we would all gather near the wood stove and listen. All us kids had favorite stories,” SmallSalmon said. “They told us how the Coyote was here before us and made the world safe for us. They taught us — they knew everything and we didn’t know anything. They were entertainment and had lessons.”

The evening began with a prayer by SmallSalmon and a feed, then the stories began with a song by Charlie Quequesah.

“I am really thankful for the Ancestors and Elders for passing these stories down,” said Chaney Bell, Salish Language Adult Apprentice Program director, in his welcoming. “It’s up to all of us to keep this going. We are pushing our students to learn these stories and to teach them to others. We’ve been doing this for a few years now.”

Some have been doing it for quite a few years.

“We were poor, but weren’t. Everyone had horses we used to hunt and gather together.” SmallSalmon said about the times of his youth. “Long ago we told stories. We all had favorite stories. ‘Grandpa tell us this one.’”

Then the Coyote stories began with SmallSalmon, followed by the Salish Language Adult Apprentice students. Many of the younger children gathered close to the storytellers sitting on blankets and a buffalo hide draped on the floor. The stories were light in nature with everyday lessons entwined.

It was a night where the clocks stopped, turned back in time and connected the spirits of the past with the spirits of today. The connections were further solidified but as Bell said, it is still a tenuous connection but it will get stronger as long as the Salish language revitalization effort continues towards its goal of multigenerational households communicating in Salish — not just in word but in the spirit encased in the word.