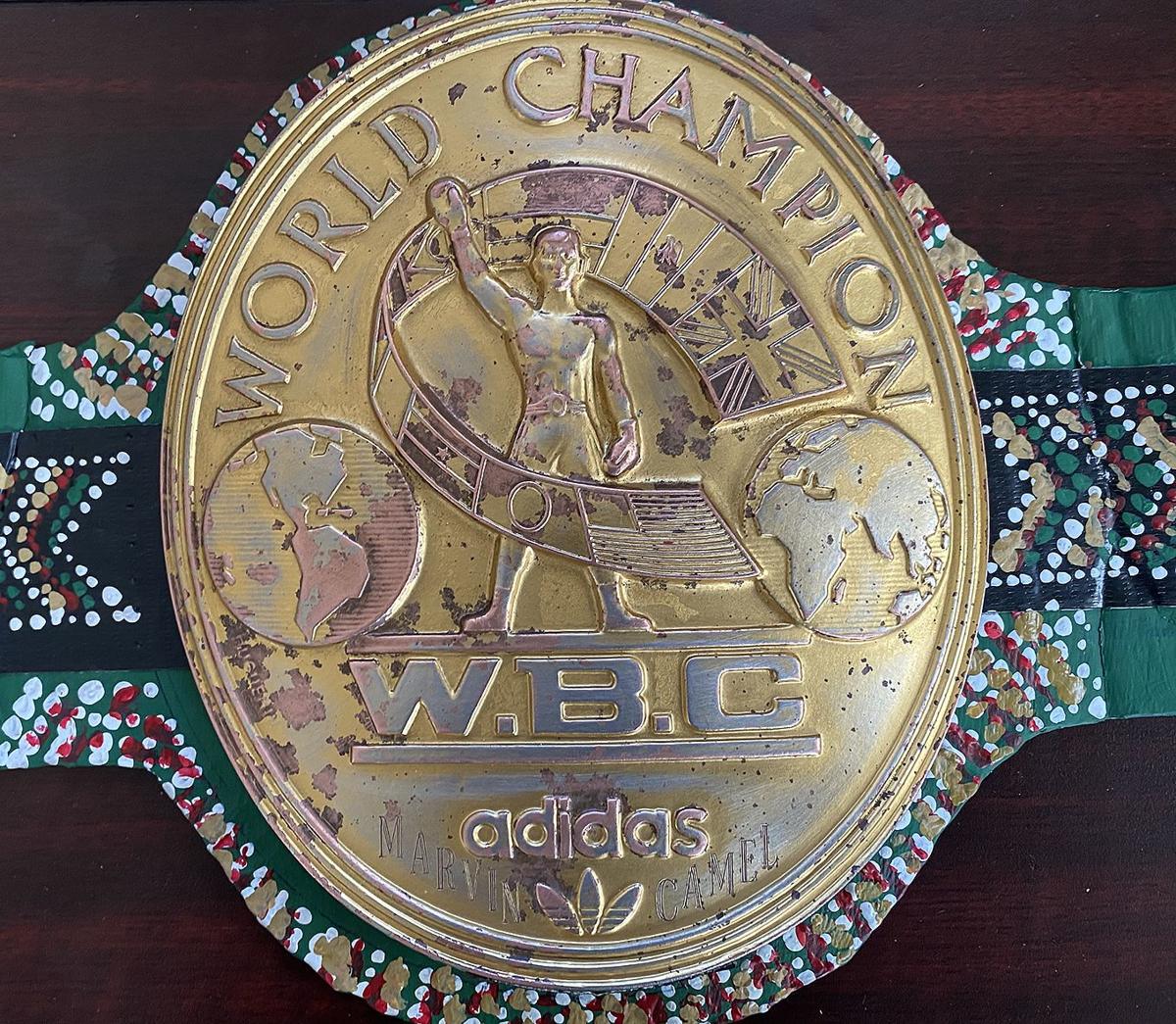 Marvin Camel’s WBC Cruiserweight championship belt medallion was the only one of the two Cruiserweight belts found; the IBF remains lost. 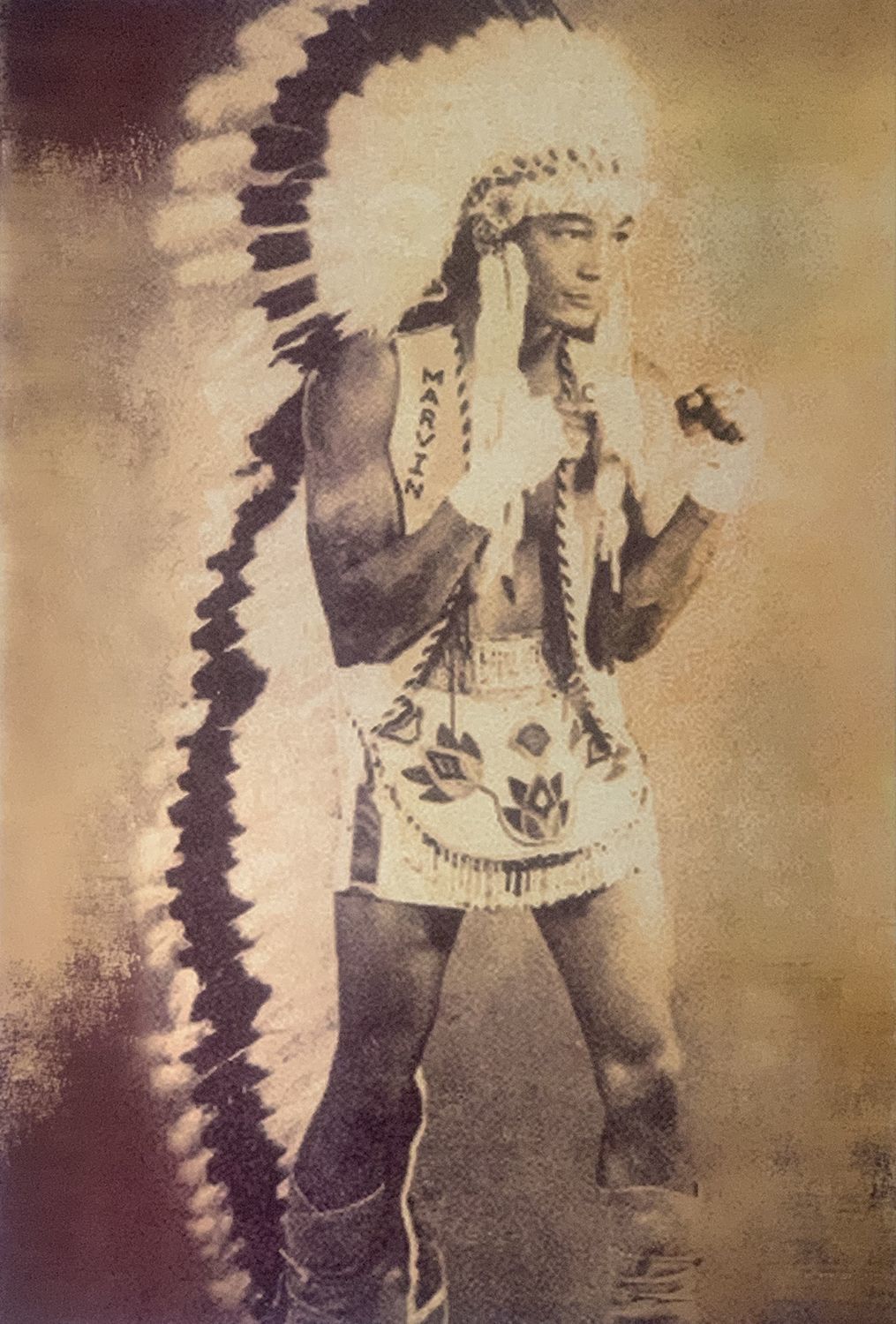 The American Indian regalia, bestowed to Marvin Camel by the CSKT Tribal Council, was not among the the boxing artifacts recently found.

RONAN — Ronan is the home of Marvin Camel despite the fact that the 67-year-old Cruiserweight world boxing champion has resided in Florida for many years now. It is where Camel grew up and embarked on a professional boxing career that took him to the mountain top with American and World boxing championships. Following his professional career, Camel returned to the the Flathead Indian Reservation, where he opened a business in Ronan and put on display his championship belts and memorabilia.

“Thirty years ago, someone stole some things from Marvin Camel that were very special to him,” said Marvin’s brother Kenny Camel. Those things were boxer Marvin Camel’s North American Boxing Federation, International Boxing Federation and World Boxing Council Cruiserweight championship belts that he won in the late-1970s and early-1980s. “It was a tragedy that someone wanted them.”

Also taken were the Champ’s floor length war bonnet, beaded drop-cloth and vest, and war staff that the Confederated Salish and Kootenai Tribes Tribal Council presented to him. “They were presented to him as a Warrior, more so as a Warrior Chief,” Kenny Camel said. “Mitch SmallSalmlon stated that Marvin represented what a Warrior Chief would be in the old days. When they took the regalia, they took a part of Marvin’s soul.”

The championship belts, Indian regalia, and posters and newspaper clippings were all on display in the glass case at the entrance of the Marvin Camel Rec Center. They were taken from the building during a burglary.

“They were all taken from Marvin’s business in Ronan,” Kenny said. The former Rec Center is now the Ronan Indian Senior Citizens Center. “Marvin wished he would have kept them in a vault. He felt they belonged to the people he fought for. He fought for the people of Ronan, the Flathead Reservation, the Salish and Kootenai Tribes, Montana and the United States.”

Miraculously, last month the WBC and IBF championship belts were found in a car at the Axmen metal scrapping business at the Wye. The vehicle was about to be crushed when a pair of Axmen employees discovered the belts and realized they were boxing championship belts that upon a closer look belonged to Marvin Camel. They were able to contact Kenny Camel and informed him of the discovery.

It was the end of a long strange journey of the belts and regalia.

Twenty years ago, the belts and regalia were found by a pair of post and pole harvesters in the Schwartz Lake area.

“They saw blue beads on the belt sticking up out of the ground and a buckle with ‘Marvin Camel’ on them,” Kenny said. “The guys thought they were left there as part of a ceremony, so they left them there.”

That could have been the end of the story, but it wasn’t

Last year James Giebar and his two daughters came across the belts and a set of youth-size boxing gloves while hiking in the McDonald Lake area between Ronan and Mission. They were placed under a post fabricated structure.

Upon discovery, identification, removal and placed in Giebar’s vehicle, he tried to contact Marvin through the electronic media but wasn’t successful. They were soon forgotten, and the vehicle eventually ended up at the Axmen for scrapping.

“They were placed in the back of a car then they forgot about them and could have never been found again because it was going to be crushed,” Kenny said. “Luckily Jason Solum at the Axmen looked into the trunk of the car found them.”

Solum contacted Kenny Camel and informed him of the discovery of Marvin’s WBC and IBF championship belts.

“When you think about what was lost thirty years ago, and the journey they took to get back into the hands of the owner is incredible,” Kenny said. “They were there in the back of a car waiting to be found. The circle was broken but now it has been reconnected.”

Kenny said the belts will be restored and Marvin will be returning home this summer to take part in a rediscovery ceremony.

“When I told Marvin he remained quiet, I could tell he was taking it all in. It was a very emotional phone call,” Kenny said. “The past and now with the belts being taken from him and finally being returned stirred a lot of emotions. He was saddened by the memory but happy about things coming full circle back to him.”

Kenny said upon reflection he and Marvin aren’t concerned about finding out who absconded the belts and regalia. “We want to just let that go,” he said. “We have some important things back and we just want to move on. The Great Spirit returned them to us, we’re looking to the future not the past.”